WHITTIER – Hundreds of Whittier community members on Aug. 12 converged on the California High School campus to celebrate the dedication and grand opening of Whittier Union’s second 7,000-seat District stadium – this one named in honor of visionary educational leader and former superintendent, Sandra Thorstenson.

The $20 million facility, built with proceeds from the District’s $75 million Measure W facilities bond, was dedicated the Sandra Sanchez Thorstenson Stadium. Thorstenson, who retired from her post in June after 15 years as superintendent and 39 total years with the District, is a renowned force who successfully instituted a culture of support, collaboration and unity among teachers and staff for the benefit of every single student.

“We are excited to open this new stadium to our schools and community and to honor a visionary, transformational leader – Sandy Thorstenson,” Whittier Union Board of Trustees President Leighton Anderson said. “She showed all of us that demographics do not determine destiny and this new stadium demonstrates that every student deserves the right to a first-rate education in high-quality facilities. I want to thank the community for supporting this project and helping us continue to empower our student-athletes on and off the field.”

During the celebration, visitors toured the District stadium, which will be shared among California, La Serna and Whittier high schools, and saw firsthand the many improvements it will offer to the school community, including enhanced seating capacity – with 2,000 seats for visitors and 5,000 seats for the home team – and upgrades that include an all-weather track, renovated soccer fields, outdoor basketball and volleyball courts, junior varsity and varsity baseball and softball fields, and concession areas.
The stadium’s scoreboard bears the name “Sandy Thorstenson Stadium.”

Thorstenson, whose roots have always run deep throughout the community, spent her entire career at Whittier Union, serving in the District since 1977 and making her personal mark on all five comprehensive high schools. The Whittier High grad began her career as a teacher at Pioneer High School, before becoming an assistant principal at Cal High. She was then assistant principal and principal at Santa Fe High School. She is also the parent of a La Serna High School graduate.

“I am beyond humbled and honored to have the state of the art sports facility named after me. It’s something I would have never dreamed when I was growing up in this very community,” Thorstenson said. “It’s a testament to the collaborative success of Whittier Union, and all the talented staff and supporters of this District, who ensure we leave a lasting impact for every student that walks through our schools.”

The Measure W bond, which was passed by voters in November 2008 to modernize Whittier Union’s campuses and upgrade its athletic facilities, also helped fund the Dick Torres Memorial Stadium at Pioneer High School, a 7,000-seat facility that is shared with Santa Fe High School.

Both feature nearly identical amenities, including an elevator and press box, as well as locker and weight rooms, an equipment storage room and coach’s office with restrooms in a separate structure below. The stadium includes a nine-lane, multi-colored synthetic track that highlights passing zones.

Under Thorstenson’s leadership, Whittier Union received considerable distinction for its “Whatever It Takes” initiative, demonstrating significant and continued improvement in academic achievement and increasing graduation rates while decreasing dropout rates. Students at every school have demonstrated significant and ongoing increases in achievement on multiple indicators despite 69 percent of students being socio-economically disadvantaged. The District boast a 96 percent graduation rate.

“Whittier Union’s foundation of academic excellence ensures that our students have access to quality facilities that enhance their learning environments,” Superintendent Martin Plourde said. “Sandy Thorstenson stands as an example the successful students and leaders Whittier Union produces. This stadium is a reminder of what we have, can and will achieve in the future for the benefit of every single student in our schools.”

WUHSDSTADIUM2: The Sandra Sanchez Thorstenson stadium, to be shared among California, La Serna and Whittier high schools, includes enhanced seating capacity – with 2,000 seats for visitors and 5,000 seats for the home team – and upgrades that include an all-weather track, renovated soccer fields, outdoor basketball and volleyball courts, junior varsity and varsity baseball and softball fields, and concession areas. 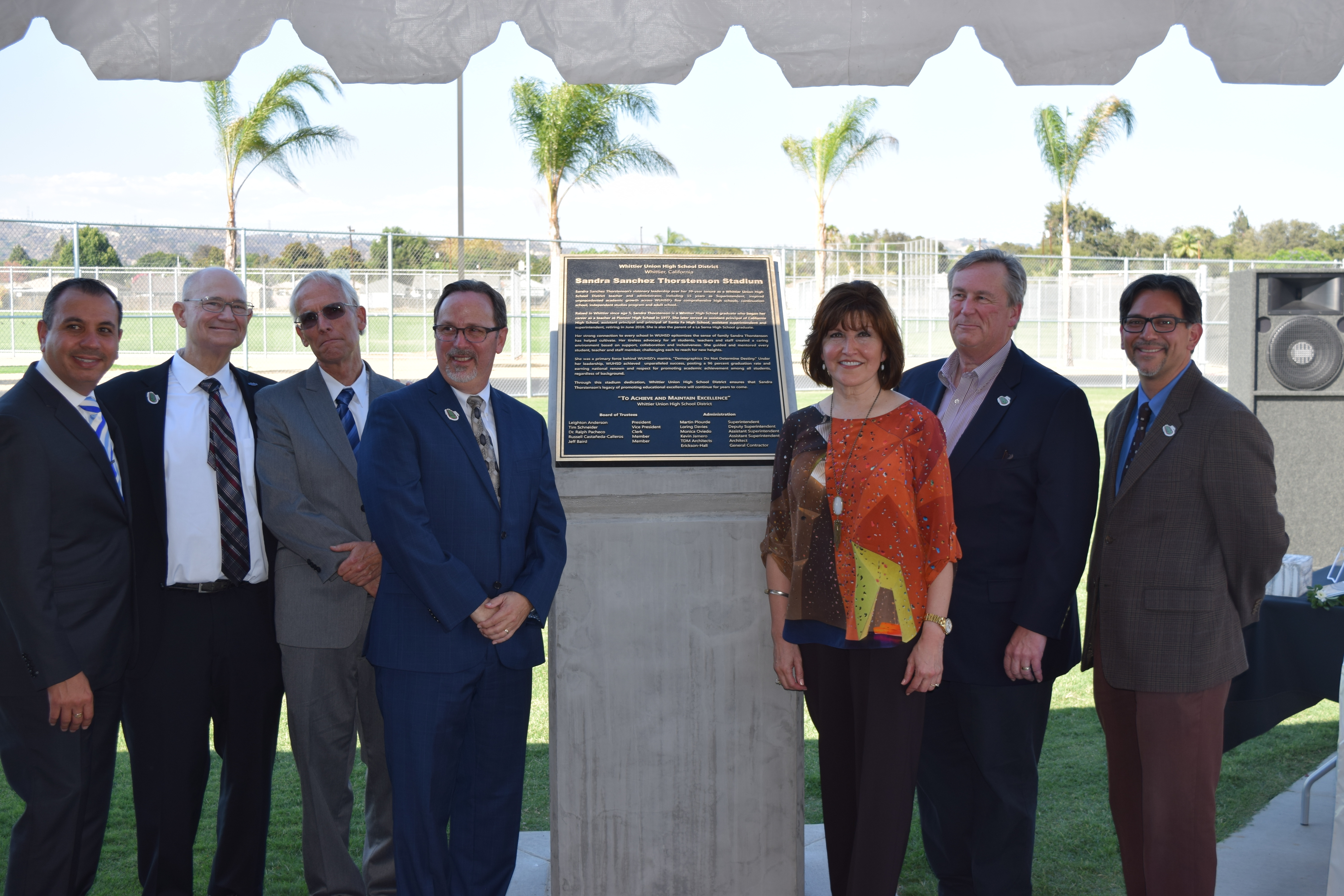 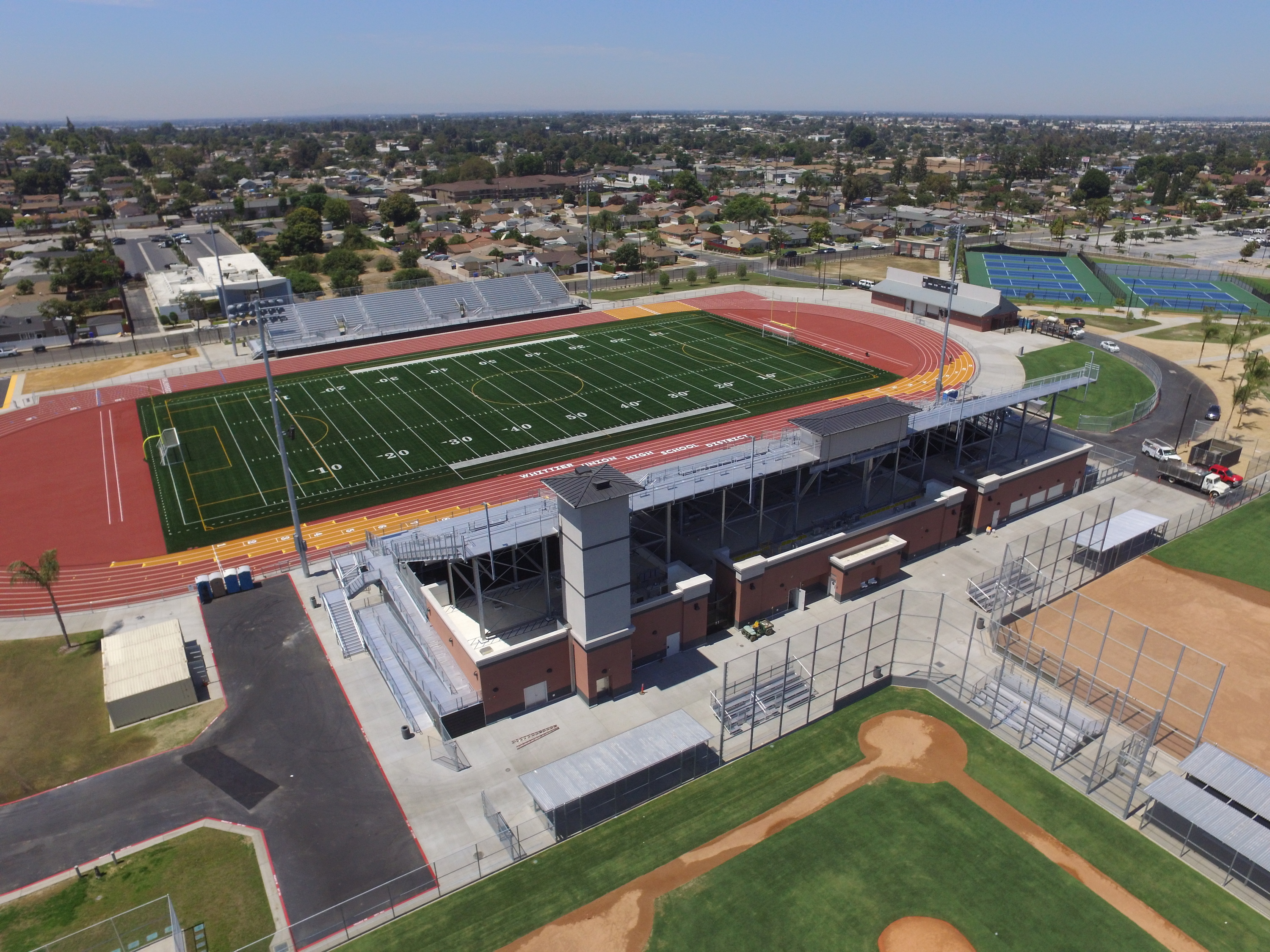