WHITTIER – William C. Gordon may have graduated from Whittier High School more than 60 years ago, but the philanthropist, attorney and author has never forgotten the school that provided him refuge as a teen nor his commitment to upholding what it means to be a Cardinal with CLASS.

Gordon, a 1955 graduate, returned on Sept. 8 to his alma mater and the library where he set out his future path, to provide more than 800 students the inspiration to overcome obstacles, succeed and give back to the community – just as he did.

“My roots are deep in the community, and this library changed my life,” Gordon said.

Over the course of the morning, Gordon shared his tale of growing up in a single-parent home, being a shoe shiner in downtown Los Angeles as a child, speaking more “Spanglish” than English and finding refuge in the Whittier High library to avoid neighborhood gang members.

“When I was 14 years old, I was in this library when I realized that I needed to make a change – I decided that if I wanted to do well in life, I had to do well in school, and I began to study,” he said.

Gordon described how he worked to become an exceptional student in college prep courses and participated in extracurricular activities, becoming a senator and Associated Student Body president during his senior year. He was also awarded the Cardinal Key, Whittier High’s most prized graduation award for students who embody citizenship, leadership, achievement, self-respect and service to the community (CLASS).

In recent years, the Whittier High alumnus has donated dozens of books and more than $230,000 to the school to fund technology upgrades, campus murals and renovate the library with new furniture, paint and an Alumni Hall of Fame showcase. The facility was dedicated the William C. Gordon Library in 2015.

“His story is empowering because a lot of people didn’t believe in him and I feel like he speaks to a lot of us who feel that way,” Whittier High School junior Jeanette Peña said. “Willie Gordon is such an inspiration and contributor to the community. He stayed true to his roots and continues to give back to Whittier High School. He is the definition of Cardinal CLASS.”

After graduating high school, Gordon earned a bachelor’s degree in English from UC Berkeley. He joined the Army and later obtained a law degree from UC Hastings College of Law in San Francisco, becoming a civil litigator and community activist for Latinos with work-related injuries.

At age 60, Gordon began writing mystery novels; he has since published seven books.

Over the past several years, Gordon has held joint educational events and fundraisers for Whittier High School and Whittier College; donated a cart with 40 iPads to his alma mater, Los Nietos Middle School; and donated funds to enhance the learning center in Santa Fe Springs. In 2009, he was inducted into Whittier High’s Alumni Association Hall of Fame.

During the visit, Gordon participated in Whittier High’s Back to School assembly, where he was given a standing ovation and formally thanked for his generous donations.

“We are fortunate to have Mr. Gordon as an inspirational figure for our students,” Whittier High School Principal Timothy Liggett said. “His story is one of many trials and successes and he demonstrates the importance in valuing one’s education. We are so grateful for everything he has done and continues to do for Whittier High School and the community.”

091517_WUHSD_GORDON1: Two Whittier High School students stop to talk to William C. Gordon, a 1955 grad who returned to his alma mater to tell his story of perseverance and the importance of giving back to the community on Sept. 8.

091517_WUHSD_GORDON2: Whittier High School students formally thanked alumnus William C. Gordon for donating more than $230,000 in books, technology upgrades and campus murals during their Back to School assembly on Sept. 8. 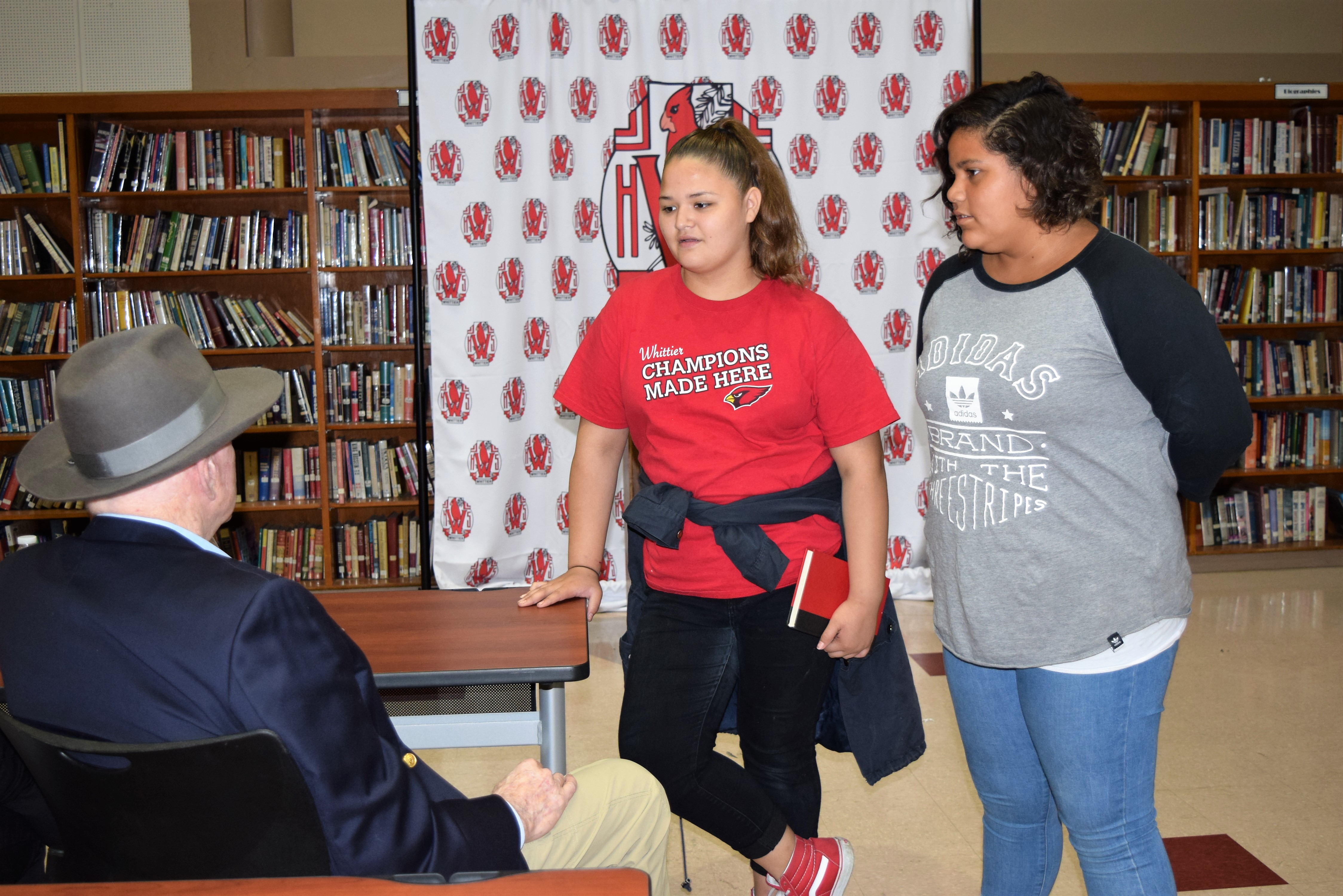 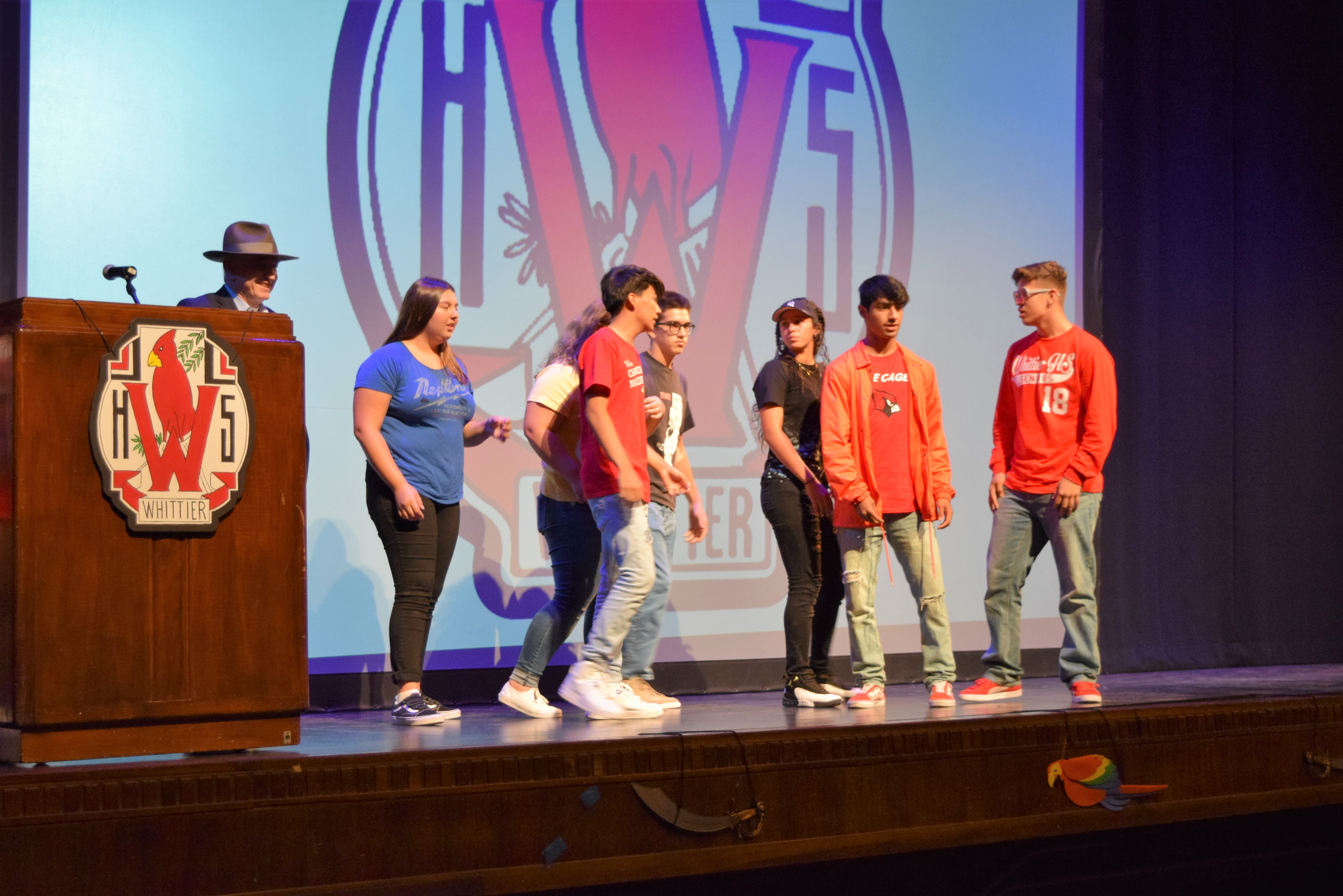 Whittier High Alum Returns to Inspire Students to Succeed, Give Back