Two Norwalk-La Mirada Unified schools have been designated as California Gold Ribbon Schools – the state’s highest award for academic excellence – giving the district a win for both applications submitted.

The awards, which have temporarily replaced the California Distinguished School awards, go to secondary campuses that successfully implement new academic content and performance standards for all students, including English learners, as demonstrated through model programs chosen by the schools.

Norwalk-La Mirada collected the award for Los Alisos Math-Science Technology Magnet and Benton Visual and Performing Arts (VAPA) Academy. Both campuses were recognized as model programs in their distinct areas and for their use of best practices to boost enrollment, parent involvement, improve achievement and reduce absenteeism and disciplinary issues.

“This recognition underscores the value of Norwalk-La Mirada’s commitment to our middle school magnet programs,” Interim Superintendent Ginger Shattuck said. “The Middle school years represent a time when some students can begin to lose interest in school, so giving them many opportunities to discover their passion can keep them fully engaged.”

The Gold Ribbon program is intended to run for two years, providing the state with an interim way to recognize excellence while California adopts new statewide assessments in math and English language arts (ELA) aligned with the California Common Core.

The former assessments were used to generate the state’s Academic Performance Index score for each school – a figure that helped establish eligibility for the Distinguished Schools program.

California dropped its ELA and math assessments in 2014 while it tested a new system that went into effect this spring. The state also put the API on hiatus while it builds a new model for determining school success that is broader than the test-score driven tool previously used.

Unlike the Distinguished Schools program, Gold Ribbon applicants nominate themselves. Both systems include site visits by a team of educators as part of the final determination of winners; both also rotate annually between secondary and elementary schools.

Eligible schools are to show model programs that improve student performance under the Common Core for ELA and math, California English Development standards and Next Generation Science Standards. The programs should feature standards-based activities, projects, strategies and practices that can be replicated by other schools.

Benton’s VAPA model offers students an array of opportunities to develop and expand their creative talents with programs that include Band, Orchestra, Guitar, Piano, World Percussion, Choir, Studio Art, 3D Art, Cartooning, Media Arts, and Photography. The school offers electives on alternating schedule so students can take multiple VAPA classes during the school day. In some cases, students are taking up to four electives taught by industry experts who have chosen to make a career shift to education.

Los Alisos’s Math, Science, and Technology Magnet Program was recognized as a model program for motivating students to study Science, Technology, Engineering and Math (STEM). The program is designed to expose students to a variety of STEM careers by participating in hands-on, problem-based learning experiences that reflect those faced by professionals in the real world. Students are introduced to technology, engineering design, robotics, environmental sciences, biomedical sciences, film and broadcasting, computer programming, autoCAD design, aerospace and electrical engineering, and applied sciences.

Los Alisos principal Mike Garcia says there are multiple measures of success for the program.

“One of our major goals was to increase enrollment at our own school and to support increased enrollment for our district high schools, so the fact that Los Alisos enrollment has increased by about 200 students since our STEM program implementation is notable,” he said. “In addition, 80 percent of our STEM program students last year went on to participate in the STEM pathways at the high school level this year.”

Norwalk-La Mirada School Board President Jesse Urquidi congratulated the students and staff at Benton and Los Alisos for their selection as Gold Ribbon recipients.

“Exciting work is taking place in all of our middle schools, and Los Alisos’ and Benton’s Gold Ribbon-winning model programs are shining examples of high quality arts and science education in our district,” he said. 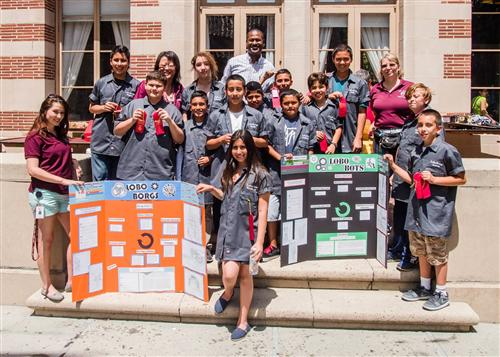