WHITTIER – Rio Hondo College welcomed more than 14,000 students for fall semester classes on Monday during a festive day that included information booths, staff on hand to guide new students and a viewing of the solar eclipse hosted by math and science professors.

“The first week of school is always a magical time on campus,” Superintendent/President Teresa Dreyfuss said. “The students are full of energy and so ready to learn. It’s great to see them as they begin their higher education journeys.”

This fall marks the first semester that the College has waived tuition for freshmen who graduated in 2017 from high schools in its service area through a program called Rio Promise.

The program includes extensive support for students as they pursue their academic goals, which now span 50 associate degrees, 24 associate degrees for transfer, 60 certificate programs and a Bachelor of Science in automotive technology.

The College also added hospitality courses and an orthopedic technician program this year and recently received a National Science Foundation grant to expand training for technicians in its groundbreaking automotive technology program.

Students can take courses at the main Whittier campus or at one of three educational centers across the region.

Anthony Nakato, 17, a 2017 graduate of La Serna High School in Whittier, is attending as part of
the Rio Promise program.

“It was a great opportunity, especially with the Rio Promise program,” Nakato said. “It’s going to give me a good start.”

“I felt nervous before the program,” he said. “Afterward, I felt confident. It was an amazing experience.”
Nakato, who will study nursing, said the math workshops determined that statistics, or Math 130, was the best fit for his math instruction. He said the program also connected him with mentors and taught him how to navigate College services, including counseling and financial aid.

Freshman Jesse Wang, 18, said she is also excited to be part of Rio Promise. An El Monte High School graduate, Wang is deciding whether to major in animation or computer technology.

“I’ve seen so much support from the college and everyone has been so nice with helping me decide what classes to take – I’ve had an amazing experience at Rio Hondo so far,” Wang said.

Helen Claros, 18, who graduated from Downey High School in 2017, said she chose Rio Hondo College because of its Pathway to Law School program, which guides students through community college to four-year colleges and then to law school. Rio Hondo is one of 24 California community colleges to participate in the program.
“I want to be a lawyer. I wanted to come somewhere that will actually help me more with what I want to do,” Claros said. “I had no idea they had amazing resources here.”

“Last year, the Summer Bridge Program helped me get priority registration to help me on my path for the ADN program and helped me with a better math class placement,” Cheng said. “It’s amazing to know that Rio Hondo College has so many teachers and staff who are willing to help students achieve their goals.”
Cheng said he plans to transfer to a Cal State or UC to obtain a bachelor’s degree in nursing.

RHC_FIRST_1: More than 1,000 students gathered outside Rio Hondo College’s Learning Resource Center on Aug. 21, with some taking part in the solar eclipse viewing event while
others asked information kiosk attendees for guidance.

RHC_FIRST_2: Friends and classmates gather at Rio Hondo College’s quad during the first day of school on Aug. 21. The college also set up an information kiosk nearby to help freshmen find their classes and other resources. 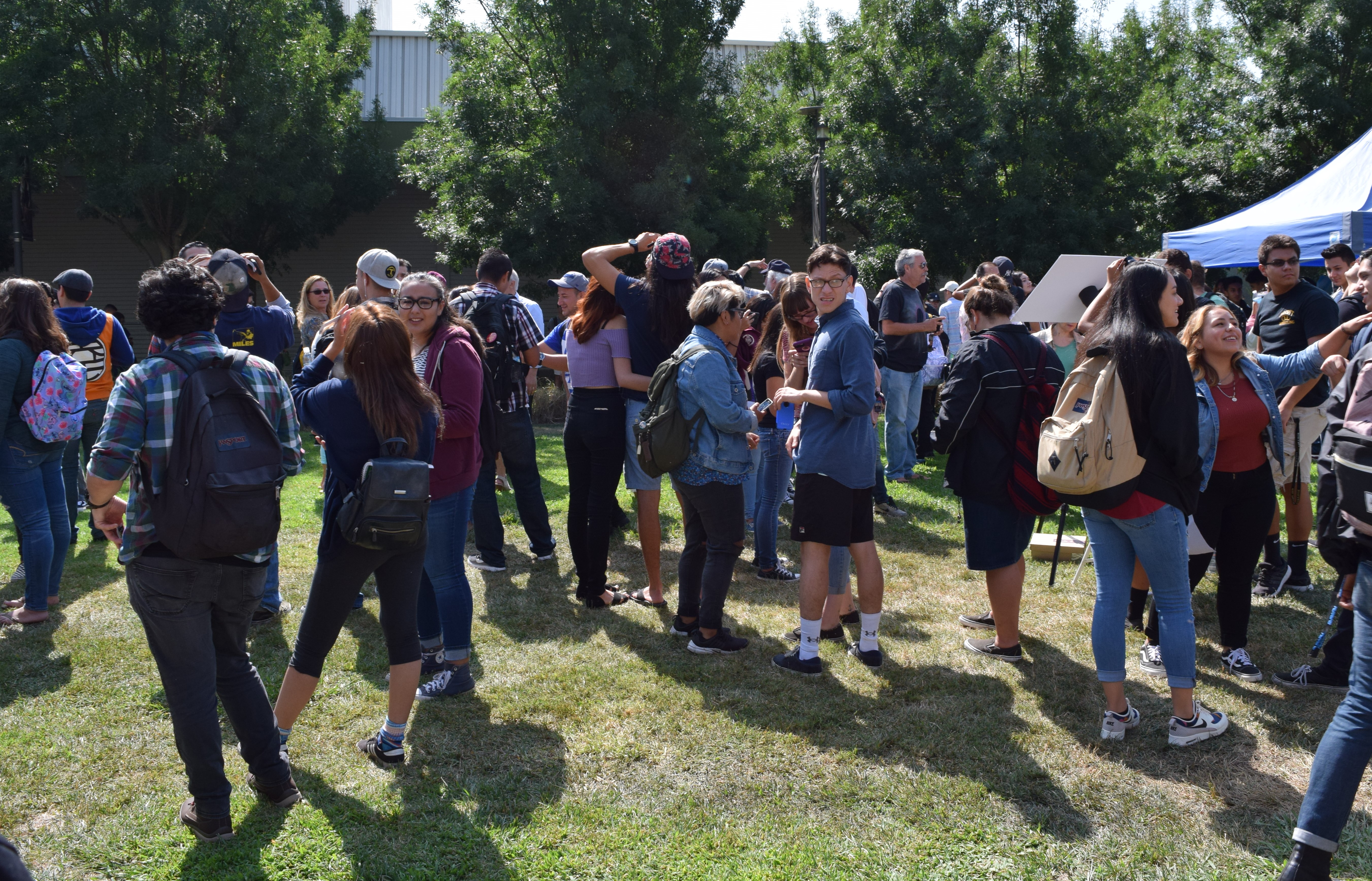