WHITTIER – Marilynn Littlefield, who has been at the helm of Pioneer High School’s award- and championship-winning Dance/Drill Team for 50 years, will be honored for her dedicated service during a reunion and tribute jubilee on Saturday, May 2.

The festive event, to be held in the gym from 5:30 to 9 p.m., will reunite Littlefield with Dance/Drill Team students she has coached over the last five decades – as many as 3,000.

“We have so many relatives from the former generations I taught on the drill team now. It’s really become a tradition,” Littlefield said. “This event is a celebration of the community and the participants because they are the ones who have kept this going and have made it what it is through all of their hard work and enthusiasm for the program.”

Penny Mammano, a 1987 Pioneer High graduate who was a member of the Dance/Drill Team for two years, called Littlefield an inspiration.

“Ms. Littlefield was always kind, fair and supportive,” said Mammano, a member of the Pioneer High School Alumni Association who is organizing the event. “She had a vision of what she wanted the Drill Team to become and made it happen. She is incredibly admired by thousands of us.”

Littlefield took charge of the Dance/Drill Team program two years after its inception in 1965, nurturing it into one of the largest and most successful competitive high school teams in the state, winning numerous state and national championships over the years.

Littlefield was inducted into the Drill Team Director Hall of Fame and named “Outstanding Drill Director” by Miss Dance Drill Team USA in 1986. The team was featured in two Super Bowl halftimes and more than 100 members of Pioneer’s Dance/Drill Team performed in the opening ceremonies of the 1984 Olympic Games in Los Angeles under her leadership.

The Whittier Union High School District Board of Trustees recognized her excellence with an award in 2012.

“I’m so inspired to see the positive changes that occur and how much these students can accomplish when they work together,” Littlefield said.
During her tenure at Pioneer, Littlefield filled several roles, including chairwoman of the girl’s physical education department. She also served as the director of the Titanette Revue – an annual song and dance tradition – for 48 years before passing the torch to the show’s new director last year.

Littlefield officially retired from teaching in 2006, but continues to work six days a week as director of the Dance/Drill Team.

“I love the entire team of girls, including our wonderful graduate choreographers who work with the team all year long, and the entire Pioneer community, who continue year after year to support our efforts to represent them well, whenever and wherever we perform,” Littlefield said.

“Marilynn is a living legend here at Pioneer High School; the success of our students has been her life’s work,” Oviedo said. “She is a role model of high expectations, hard work, grace and integrity and I greatly appreciate her untiring efforts and the positive impact she’s had on the young ladies of Pioneer High.”

“As a former Pioneer High teacher, I was fortunate to have Marilynn as a mentor and have had the pleasure to witness how revered she is by generations of students across the school and throughout the District,” Thorstenson said. “While she is the winningest coach in Whittier Union, her greatest legacy will always be the positive influence she’s had on the lives she’s touched.”

LITTLEFIELD: Dance/Drill Team Director Marilynn Littlefield receives a special award for her service to Pioneer High School and its students in 2012 from the Whittier Union High School District Board of Trustees. She will be honored during a reunion and tribute jubilee on May 2, 2015. 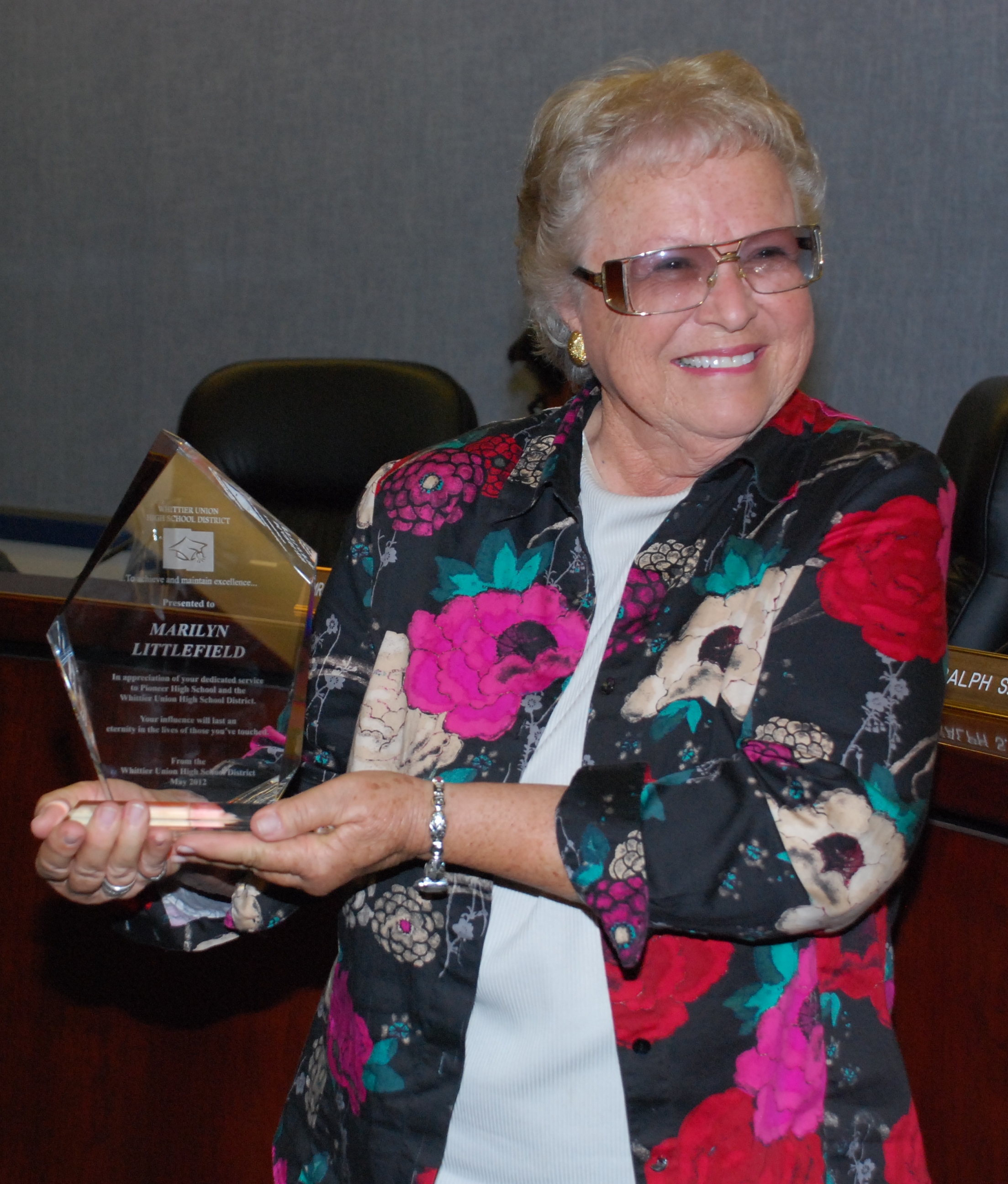