Southeast Academy in Norwalk is celebrating two of its highest-achieving cadets, as they head to prestigious national universities, taking their first steps toward careers as officers in the U.S. Armed Forces.

“The whole experience is surreal,” said Gutierrez, who plans to major in psychology. “When I first came to Southeast I was very shy. Through the tremendous guidance of my instructors and the observation of the Academy’s leadership traits and principles, I am prepared to take the next step in the service of our country.”

Gutierrez was inspired to attend West Point as a junior when she heard Southeast alumnus Casey Batley describe his experiences at the USMA at Southwest’s Academy Day. Determined to earn her place at USMA, she rose in rank at Southeast from squad leader to battalion commander and obtained a Congressional nomination from U.S. Rep. Linda Sanchez, who interviewed Gutierrez last November.

Upon graduation of West Point, Gutierrez will be commissioned to the United States Army as a second lieutenant.

“Congratulations to Marissa and Jose, who made the commitment to their education and country, and are on their way to being the leaders of tomorrow,” NLMUSD Superintendent Dr. Hasmik Danielian said. “With Southeast Academy’s culture and high accountability standards, students graduate college- and career-ready, inspired to give back to their communities.”

Barajas set a goal to become an officer in the U.S. Marine Corps when he spoke with a selection officer during a visit to a Naval Reserve recruitment center. He began a two-tiered application process, applying separately for the NROTC scholarship and admission to Oregon State.

When Barajas graduates from OSU, he will be commissioned as a second lieutenant in the Marine Corps.

“At Southeast Academy, you have Marines teaching you, and they take great pride in wearing the uniform. They are our role models, they are there to help us succeed,” said Barajas, who plans to study kinesiology at OSU. “I will be best served in the Marine Corps, leading Marines.”

“I am proud that our students will be contributing to the best and brightest minds in the United States, and will become greater leaders in the future,” NLMUSD Board President Karen Morrison said. “Through the leadership of its director, Master Sgt. Marty Schafer, Southeast Academy is doing its part to ensure that America will remain strong and vigilant.”

SEACADETS: Southeast Academy cadets Jose Barajas and Marissa Gutierrez will be taking their first steps towards careers as officers in the United States Armed Forces. Gutierrez has been accepted into the U.S. Military Academy at West Point, while Barajas received a $180,000 NROTC scholarship to attend Oregon State University. 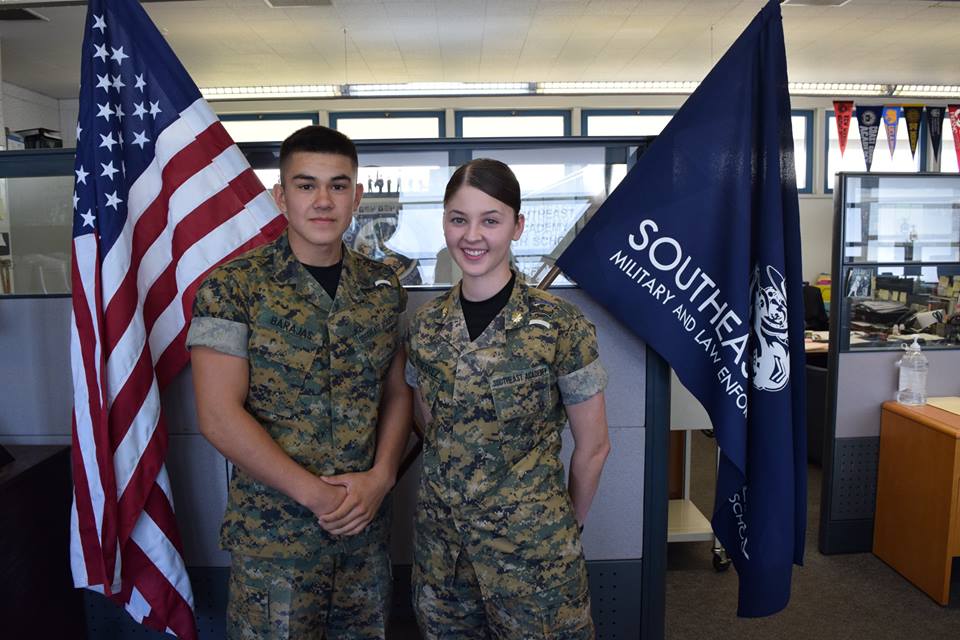