Thirty Norwalk-La Mirada middle school musicians, all District Honor Band members, got their first experience performing on the big stage when they joined with the La Mirada Symphony for a pair of performances April 19 at the La Mirada Theater for the Performing Arts, with more than 1,000 District students in the audience.

“The opportunity to perform with some of the best musicians in the world is a once-in-a-lifetime experience, and serves to show our students that anything is possible if they establish a goal and stay dedicated to achieving it,” NLMUSD Superintendent Dr. Hasmik Danielian said. “This is a wonderful event. They played beautifully.”

La Mirada Symphony conductor Alan Mautner began the program by giving the audience a brief tutorial on the four components of a symphony orchestra – percussion, wind, brass and strings. Then, assembled the honor band musicians on stage to play “Into the Clouds” and “The Thunderer.”

“This is my first time getting to play with the symphony,” said Julissa Flores, a Corvallis seventh-grader who plays double bass. “I am looking to improve myself and my classmates. We can all learn from each other.”

Next, two La Mirada High School guitarists were introduced as winners of the Blanche Nissim Memorial Competition. LMHS senior Kayla Harrell and sophomore Alyssa Salas performed a guitar duet of a Domenico Scarlatti sonata and received both a medal and a $100 cash prize.

“This is pretty cool,” said Harrell, who will continue her music education at Vanguard University and has collaborated with Salas for two years. “This is such a great opportunity to learn from professionals.”

In a light moment, Mautner invited four NLMUSD elementary school students on stage to play a variety of unlikely percussion instruments – a slide whistle, a bike horn and a bird whistle – with the symphony. This prompted a large cheer from the audience, which consisted of the entire District fifth-grade class, as well as advanced band, orchestra and guitar class students from all the middle schools.

“This is a really fun day, and it serves as an excellent recruitment tool for the music program,” District VAPA coordinator Karen Calhoun said. “For the fifth-grade class, it presents an achievable goal for them upon entering middle school, and for the middle school musicians, it shows what can be accomplished if they apply themselves.”

Music instruction is offered to every NLMUSD student – from transitional kindergarten to grade twelve – as part of the VAPA curriculum. The Youth Enrichment Program began in 2001 as a way to bring orchestral music to the schools.

“Our collaboration with the La Mirada Symphony continues to be a jewel of our performing arts program, and we thank their board of directors for their enthusiasm and support for our VAPA program,” NLMUSD Board President Karen Morrison said.

LAMIRADASYMPHONY1: Thirty Norwalk-La Mirada middle school musicians received their first experience performing on the big stage when they joined with the La Mirada Symphony for a pair of performances April 19 at the La Mirada Theater for the Performing Arts, with more than 1,000 District students in the audience.

LAMIRADASYMPHONY3: Kayla Harrell (left) and Alyssa Salas (right) of La Mirada High, winners of the Blanche Nissim Memorial Competition, perform a guitar duet at the La Mirada Theater of the Performing Arts on April 19, during a pair of performances with the La Mirada Symphony by thirty NLMUSD middle school honor band musicians. 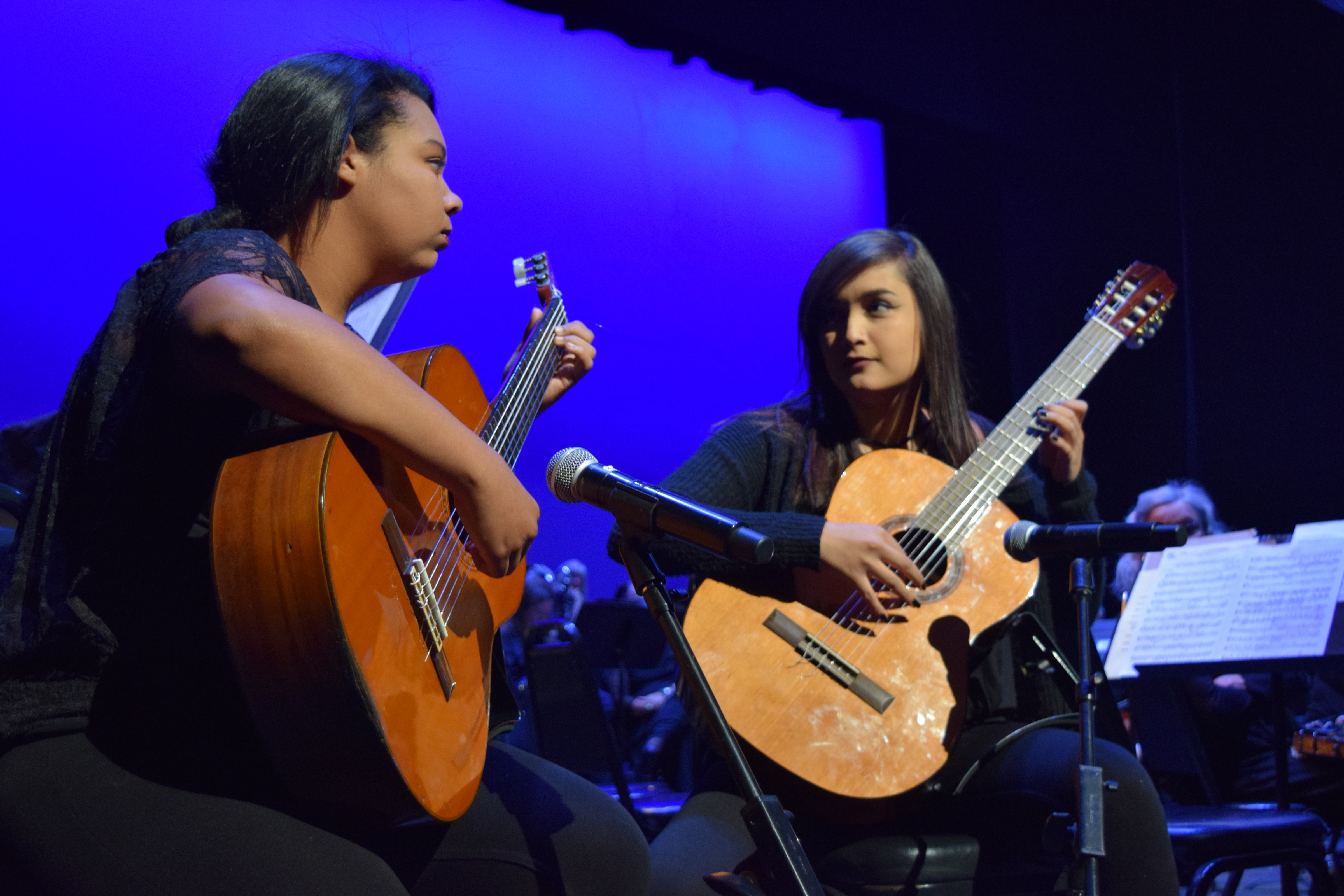 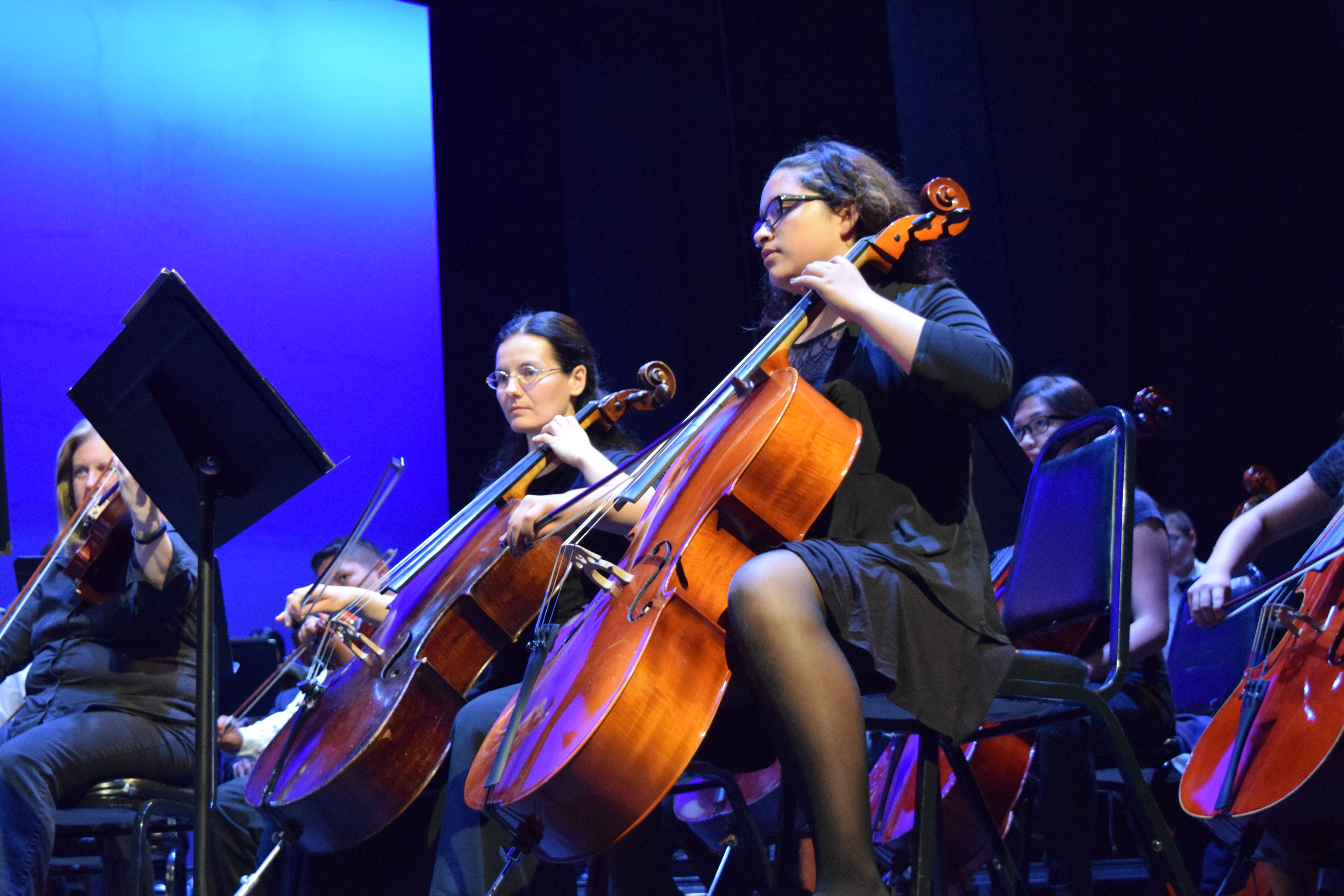 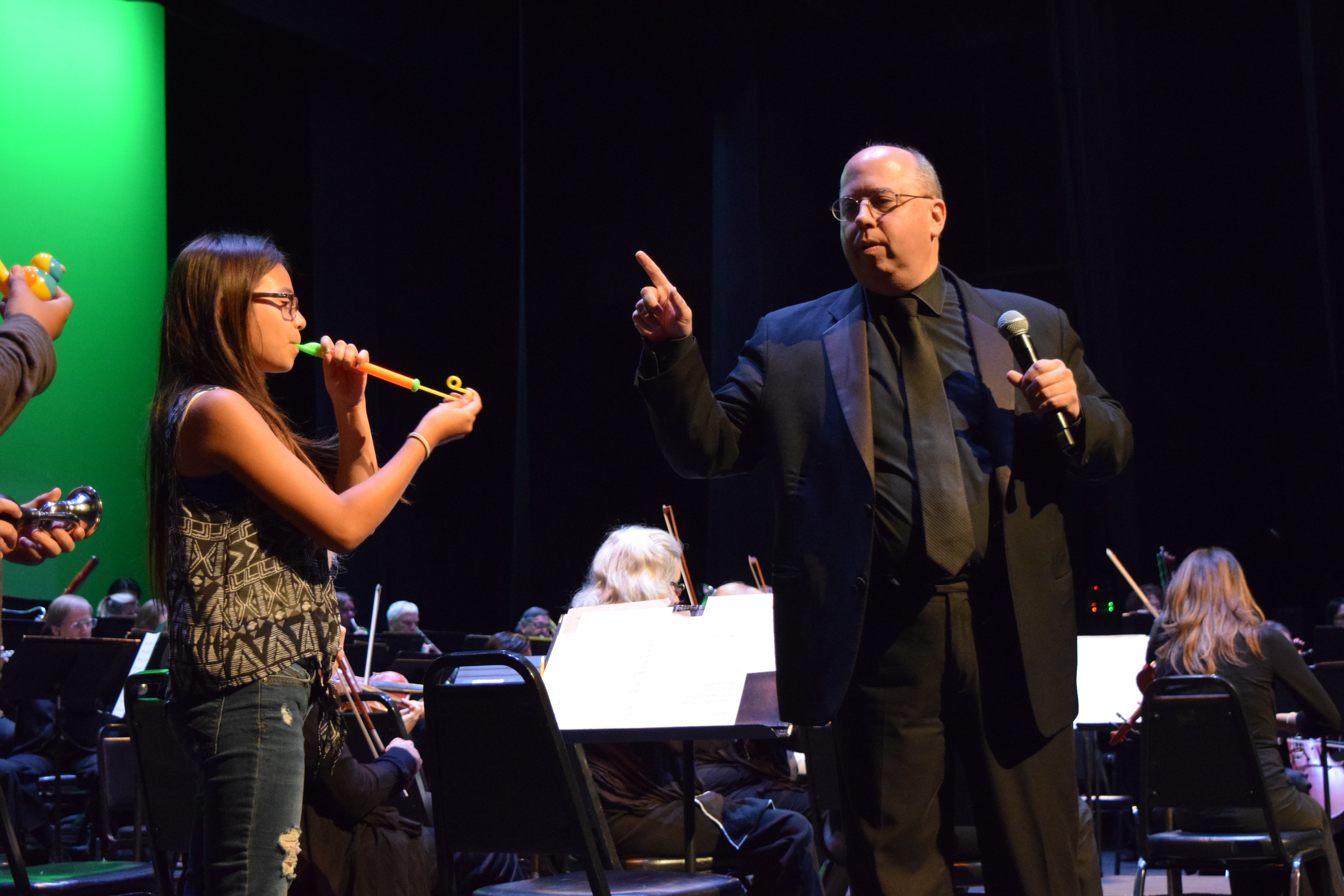