BELLFLOWER – Bellflower High School is celebrating two Golden Footballs received from the National Football League in honor of alumni Ron Yary and Ed Dickson, players who between them appeared in six Super Bowls, stretching from the contest’s early days to this year’s Super Bowl 50.

The Golden Footballs are symbols of the NFL’s High School Honor Roll initiative, launched as part of its Super Bowl 50 outreach program. The initiative links the past 49 Super Bowls to this year’s game and honors the high schools and communities that have benefitted the game of football.

More than 2,000 high schools across the country and nearly 3,000 Super Bowl players and head coaches will receive commemorative Golden Footballs.

“We have them proudly displayed in our trophy case,” Bellflower Principal Mike Lundgren said. “They are a great reminder to our students about how far dedication to your goals can take you.”

Yary’s career is legendary. At Bellflower, he starred on football, baseball and basketball teams, graduating in 1964. He attended USC, helping the college to secure a national football championship in 1967. Named America’s best interior lineman in his senior year, he graduated in 1968 with a degree in finance.

That same year, he was recruited as the No. 1 choice in the draft by the Minnesota Vikings. A towering 6 feet, 5 inches tall and 255 pounds, Yary played 14 years as a tackle for the Vikings, making appearances in Super Bowls IV, VIII, IX and XI. He played his final year with the Los Angeles Rams. In 2001, Bellflower High named its football stadium in his honor.

Dickson, a tight end, led Bellflower in receiving yards and quarterback sacks as a senior, and was named Southeast-South Coast Lineman of the Year. He graduated from the school exactly 40 years after Yary, and attended the University of Oregon. He was recognized as national player of the week in 2009 and was on the watch list for the nation’s best tight end.

He graduated in 2010, earning a degree in family and human services. He was drafted in the third round (70th overall selection) that year by the Baltimore Ravens. Stretching 6 feet, 4 inches and 255 pounds, Dickson helped the team to its Super Bowl XLVII victory over the San Francisco 49ers. He joined the Carolina Panthers in 2014 and played in this year’s loss to the Denver Broncos.

“These extraordinary men are part of Bellflower’s rich athletic history,” Superintendent Dr. Brian Jacobs said. “They serve as inspiration not only for their skill on the football field, but as students who also vigorously pursued their educational goals at some of the country’s top universities.”

As part of the NFL’s High School Honor Roll initiative, high schools honored will also receive a new character education curriculum and the opportunity to apply for grants of up to $5,000 to support their football programs.

CAPTION: Bellflower High School is displaying two Golden Footballs in honor of NFL greats Ron Yary and Ed Dickson, who graduated from the high school in 1964 and 2004, respectively. 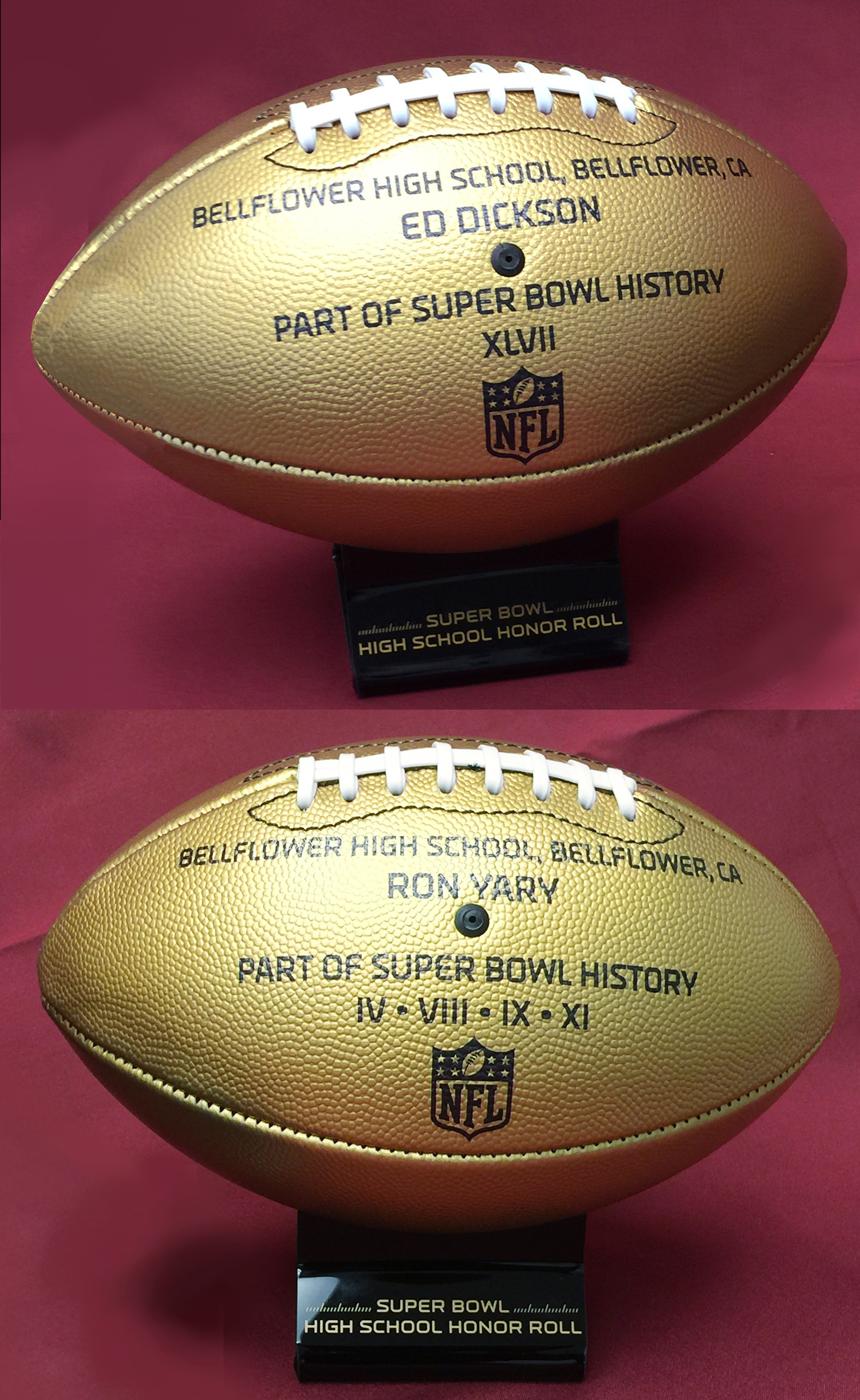