The participatory lesson in civics was designed to teach Lynwood students about the real-life issues confronting voters on Nov. 8, with booths and placards for not just the presidential contenders, but also California’s U.S. Senate seat and the myriad propositions and initiatives on the 2016 California ballot.

“The Lynwood staff is to be commended for putting together such an elaborate, detailed and engaging event,” LUSD Superintendent Paul Gothold said. “It’s a proactive approach that really resonates with the students, enabling them to immerse themselves in the democratic process and debate freely with each other.”

“We have over 250 students who have researched candidates and propositions and are prepared to argue their case,” Alfaro said. “The rest of the student body comes to listen, make an informed choice and vote.”

Students chosen as advocates relished their roles, shouting and screaming, holding signs aloft and engaging in boisterous dialogues as classmates worked their way through a horseshoe-shaped gauntlet of candidate and ballot measure booths in shifts throughout the day.

Though they were role-playing, many students chose positions that allowed them to express their own views.

“I’ve been interested in politics since Barack Obama was elected in 2008,” Lynwood senior and Trump advocate Luis Pescador said. “Our foreign and economic policies need to be changed. That is why I am supporting Donald Trump.”

“I am a firm believer in education and Clinton wants to provide quality education for all students,” Penaloza said. “We need Hillary. She is the only candidate who can lead us through these tough times.

Preparations for the mock election have been ongoing since the start of fall term. In Alfaro’s AP Government class, students have been studying the issues, watching television ads, and researching their positions, often coming to class early and staying late, and even working through their lunch periods. In Abbass’ Economics class, students reviewed and critiqued the debates and identified the impact of each presidential candidate’s economic plan.

The mock election had a light side to it, as students dressed as Republican nominees Trump and Mike Pence were shadowed by students acting as Secret Service agents. And, as in a real-life convention, there was much shouting and chanting, with students using their debating skills to better emphasize their position.

“Lynwood’s mock election provides our students with civic education that develops their critical thinking and collaborative learning,” LUSD Board of Education President Alma-Delia Renteria said. “It goes beyond what they can learn in a textbook and speaks to issues that greatly affect them in the present day. They will become better citizens and will hopefully stay engaged in the political process after they graduate.”

LUSDMOCK1: Shouting and chanting to better emphasize their positions, Lynwood High School students participate in a mock presidential election on Oct. 11. Over 250 students assumed the roles of political advocates, then used their debating skills on their peers, who took time from their studies to come out and vote.

LUSDMOCK2: Supporters of Green Party presidential candidate Jill Stein share a laugh during a mock presidential election held at Lynwood High School on Oct. 11. The participatory lesson in civics was designed to teach Lynwood students about the real-life issues confronting voters, who will vote on Nov. 8. 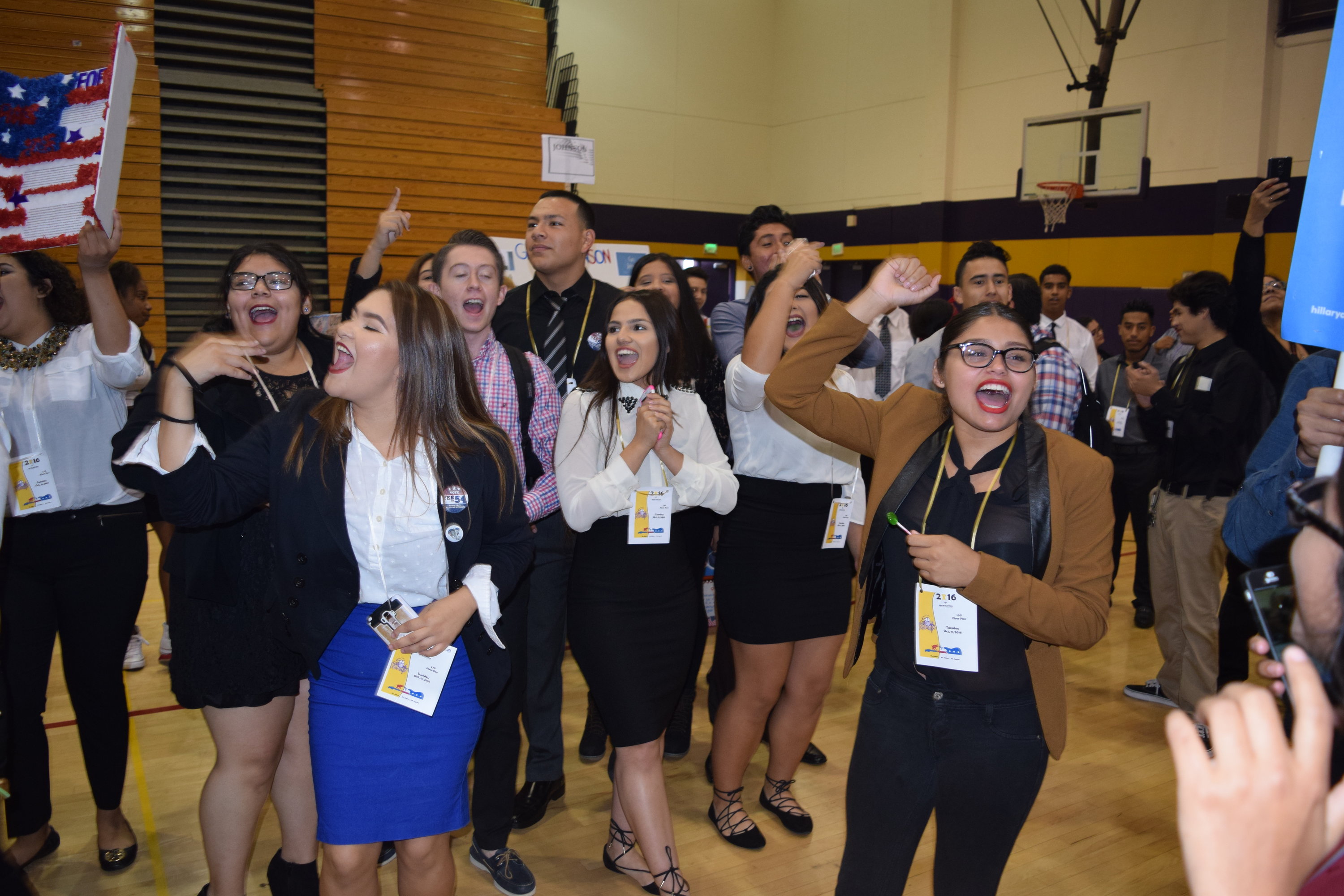 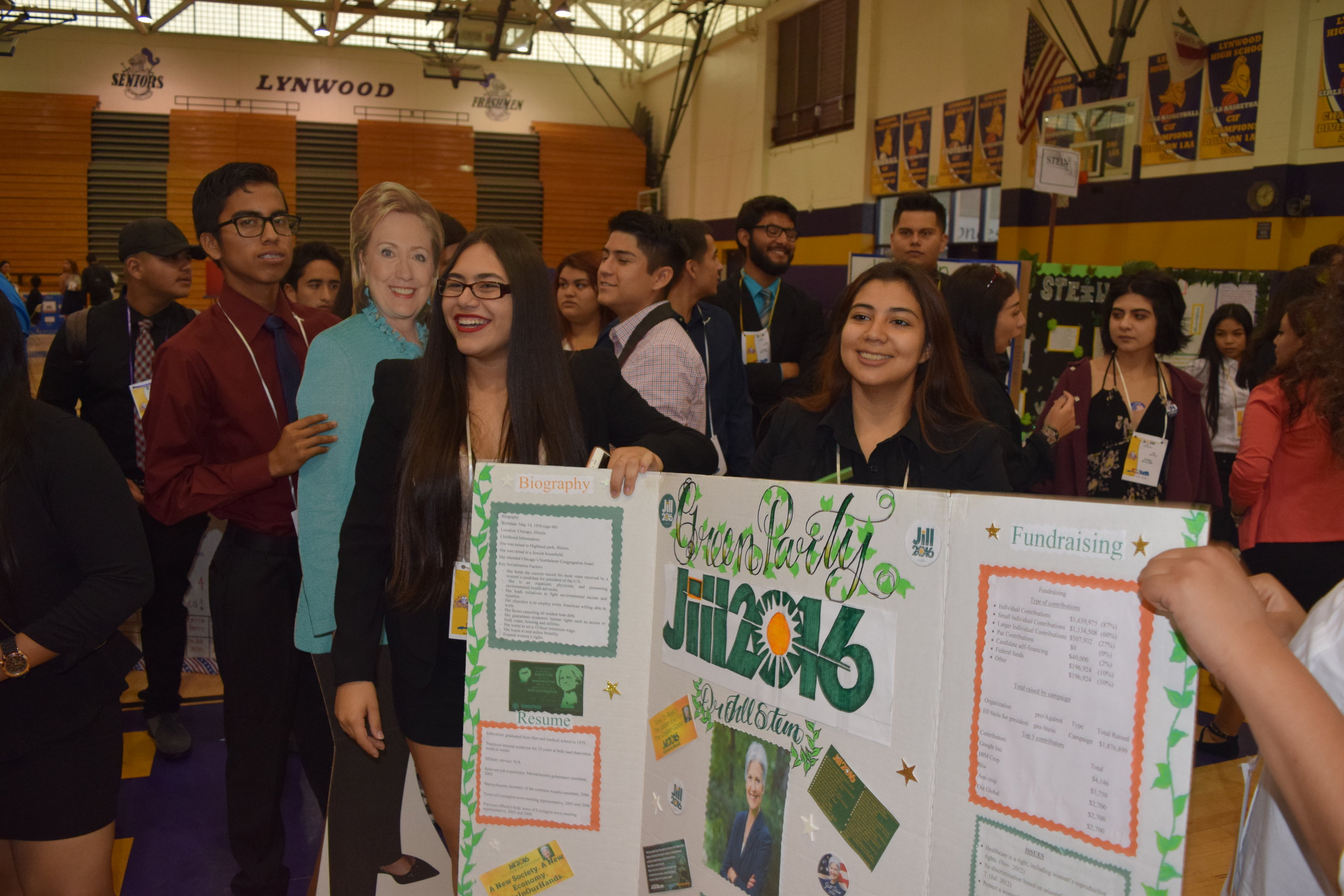