MONTEBELLO – In middle school, Laura Jimenez, a senior at Montebello High School, took a trip to the University of Michigan for a club water polo tournament. She returned home, spirited and resolved that she would play water polo for the university when the time came.

Jimenez, known throughout the Almont League for her prolific offensiveness in the pool, began swimming when she was 5 after her doctor told her family that she was born with a punctured lung. Swimming, the doctor said, would be good for her lungs and overall health. Water polo followed three years later.

“Laura has been such a tremendous asset for Montebello High,” said MUSD Board of Education President David Vela. “During all four years at MHS, she has played varsity water polo, swam on the varsity team, played and swam on competitive club teams in Commerce, all the while maintaining the academic integrity to get accepted into an esteemed institution. What a stellar example of determination and passion.”

On Tuesday, April 22, Jimenez knew she was going to sign her official letter of commitment to attend University of Michigan in MHS Principal Jeff Schwartz’s office. What she didn’t know was that she was going to be joined by her family, club coaches, high school coaches, MUSD Athletic Director Rafael Gutierrez and local media.

“Laura fell in love with Michigan at a young age and grew to love it more and more each time she visited,” said Sandra Jimenez, her mother. “When she got accepted, I wanted her signing to be a special moment for her so we asked her past coaches and friends to join. We are especially grateful to her coaches and assistant coaches including Kenny Clements, as well as Kevin Larson, her swim coach, and her club water polo coach, Gabriel Martinez. Each one has gone above and beyond to contribute to Laura’s success.”

In addition to serving as co-captain of the varsity squad and selected as co-Most Valuable Player of the Almont League this year, Jimenez boasts a talent very rare in water polo. She is ambidextrous in the pool. Being able to shoot with both her right and left arms has contributed to her significant stats. She scored 77 goals this season, shooting at about 60 percent, a team high. Moreover, she leads the team in assists and is second on the team in steals.

“Laura is probably one of the most dynamic and skilled players I’ve ever coached,” said Kenny Clements, MHS women’s water polo coach. “She was someone I could use anywhere in the pool with success. What’s more is that she really was a team leader; her work ethic and discipline was unparalleled.”

Jimenez was also recruited and accepted by other schools in the area such as Azusa Pacific University, California State University, Long Beach, as well as Hartwick College in New York.

“We wish to extend our congratulations to Laura, her family and all of her coaches,” said MUSD Superintendent of Schools Cleve Pell. “We know she will succeed academically and athletically at Michigan and beyond.” 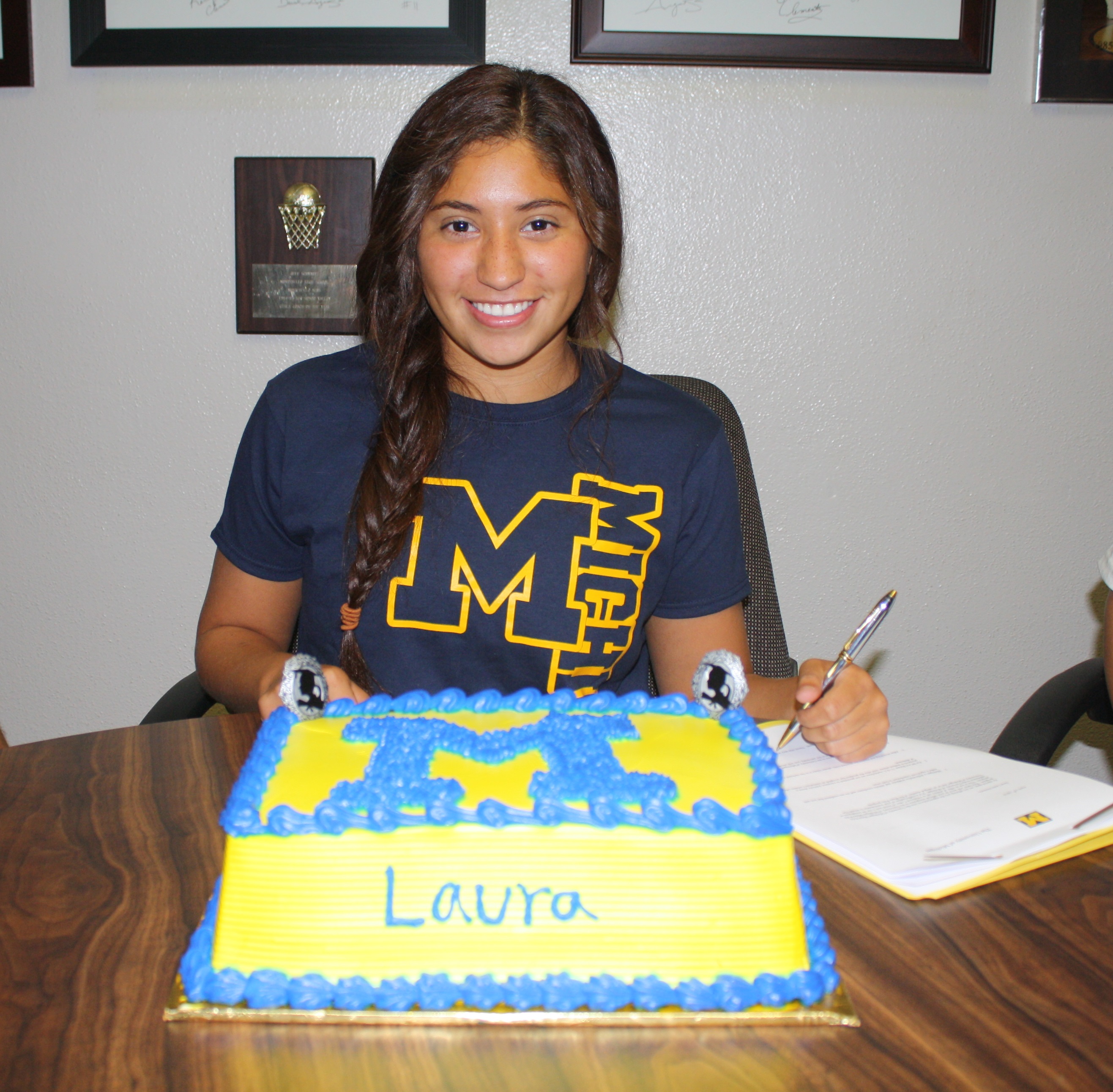