Lynwood – Susana Chavez, a third-grade teacher at Thurgood Marshall Elementary School, has been named Lynwood Unified’s 2016 Teacher of the Year in recognition of her success in engaging students in the classroom and at encouraging parents to be involved in their child’s education.

Chavez uses a smartphone app called Remind to keep parents updated about classroom happenings like picture day, progress reports and upcoming tests. The app allows her to stay in contact with parents without handing out her personal contact information.

When she learned some parents struggled to help their children with rounding numbers, she hosted several of them for an after-school workshop, with one parent even recording Chavez’ lesson to help remember it.

“I don’t do these things for the fame,” Chavez said. “I do them for the students. I want my students to succeed to the best of their abilities and that is more likely to happen when teachers and parents are a team.”

LUSD Superintendent Paul Gothold said the District is fortunate to have teachers like Chavez who are willing to stay after school to help parents on top of transforming their classrooms to engage students through interactive lessons and activities.

“She is a role model as a person of great character who cares deeply about the success of her students,” Gothold said. “Her dedication to communicating with parents is inspiring and is representative of the cooperative community we’re fostering at Lynwood Unified.”

To boost her students’ confidence during state testing, Chavez invited parents to write letters encouraging their children to do well on the exam. After receiving letters and pictures from every parent and writing one of her own for everyone in her class, Chavez instructed her students to put their heads on their desk while she passed the letters out, playing classical music in the background to create a more intimate atmosphere.

When her students opened their letters they were surprised, with some students shedding tears of happiness — it was the first time some students had ever received a letter from their parents.

“Children want their parents’ attention,” Chavez said. “And when students have their parents engaged in their learning, they are going to try even harder to make them proud.”

Chavez was chosen to speak about this strategy and being named Lynwood Unified’s 2016 Teacher of the Year in front of 200 teachers during the second California Teachers Summit at CSU Dominguez Hills on July 29.

Collaboration with fellow third-grade teachers is also important to Chavez, who schedules weekly meetings with colleagues so they can all learn from each other.

Chavez puts her love for mathematics into her lessons, cutting gummy worms into segments and placing toppings on different slices of pizza to teach about fractions and using songs to help students remember formulas for calculating the perimeter and area of an object.

Chavez added that it’s important to instill an interest in math early on because it provides a pathway to high-demand careers in computer programming and engineering later on.

“I couldn’t be prouder of Susana for rising to the top and creating such an inclusive environment for students and parents to learn,” Board President Alma-Delia Renteria said. “She brings joy to students, parents and fellow teachers and I can’t wait to see her continued growth as an educator.”

080116_LUSD_TOY1: Susana Chavez, a third-grade teacher at Thurgood Marshall Elementary, was selected as Lynwood Unified’s 2016 Teacher of the Year. 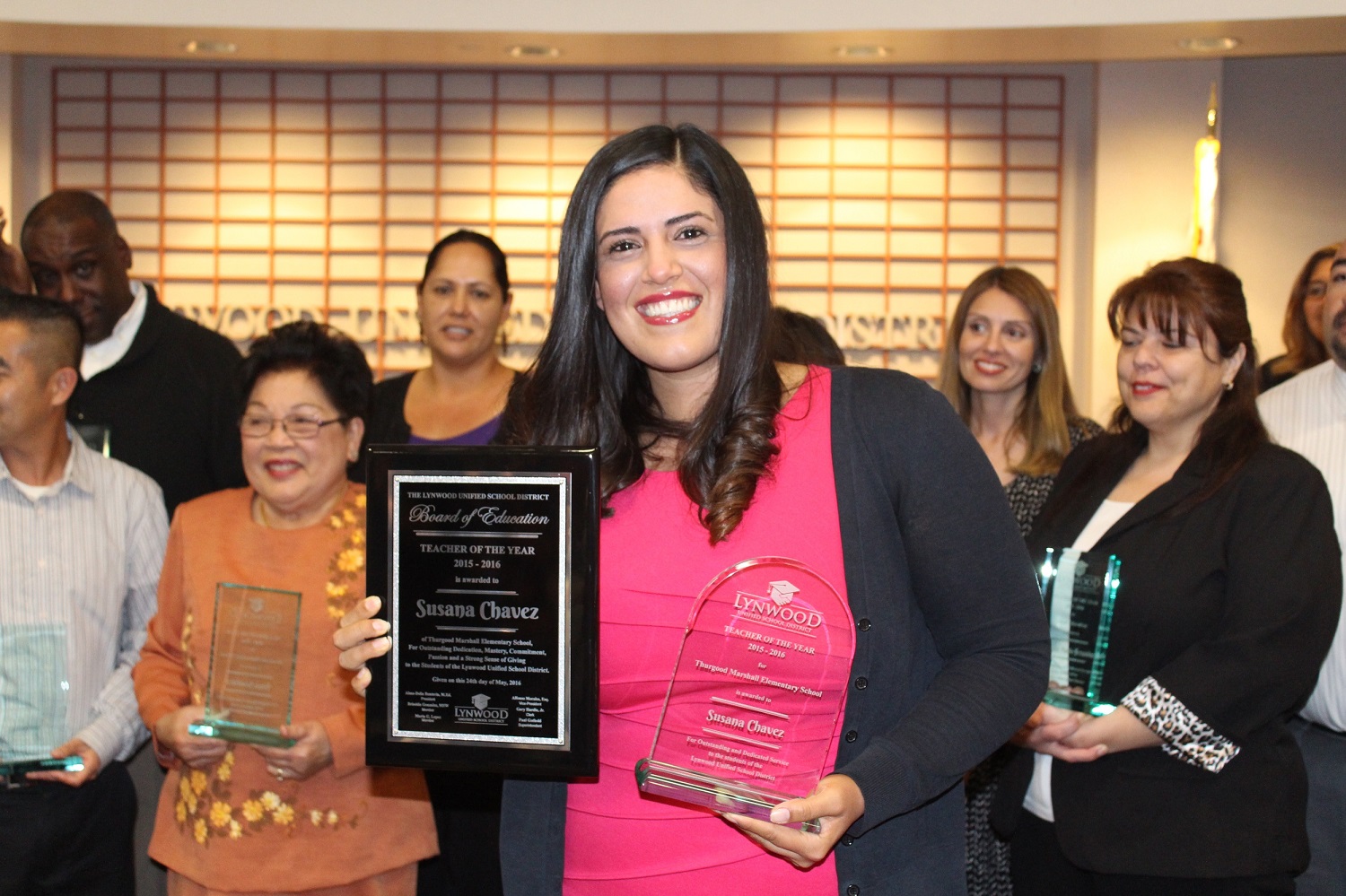