Eduardo Zuñiga is just 11 years old, but this month he is serving in a very important position – the City of Lynwood’s first “Kid Mayor.”

Out of nearly 200 of his peers, the fifth-grader at Lincoln Elementary was recommended for the position by his teachers has spent the last few weeks attending special events, City Council meetings, doing interviews with the media, making recommendations on new city programs and meeting new people. He was also awarded a $400 scholarship, which was deposited in a fund designed for him to access when he’s ready to go to college.

“I felt I was dreaming when I found out I was picked as the Kid Mayor,” he said during his school lunch break. “I pinched myself and realized it was actually real. I was amazed that out of more than 100 kids, they chose me.”

The program was launched by Lynwood Mayor Jose Luis Solache, a former Lynwood Unified board member. Every month, he is opting to cash out his city-provided health benefits to provide one fourth- through sixth-grade student from each of Lynwood Unified’s 12 schools with the opportunity to serve as the Kid Mayor and receive a $400 scholarship.

“This is me paying it forward. When I was a sixth-grader, one of my teachers gave me an application to the Upward Bound Program. He believed in me,” said Mayor Solache, who served 10 years on the LUSD School Board. “As Mayor I want to share this leadership opportunity with our youth so that they can have the same opportunities that I’ve had since I participated in that Upward Bound Program many years ago. I want our youth to know that we believe in them too.”

Eduardo already has big plans for his community. He hopes to reduce fighting and bullying, see more kids succeeding in math and see the city of Lynwood “be No. 1.” He also hopes the city can offer a free or affordable community sports program for kids.

His mother, Fabiola Hernandez, said Eduardo has a noble spirit and is always thinking about his family and siblings. His teacher, Veronica Villegas, called Eduardo “exceptional.”

“He’s well-rounded and so dedicated to his community,” Villegas said. “He’s an excellent student and very smart. I really have to challenge him in class because he is so advanced.”

The program will continue in February when teachers at another Lynwood Unified school recommends a stellar student.

“It’s so important for our students, from a young age, learn the importance of civic involvement,” said Board of Education President Maria G. Lopez. “I want to thank Mr. Solache for bringing such an innovative program to our community so that our students have access to more hands-on opportunities that promote learning in our community.”

Lynwood Unified Superintendent Paul Gothold congratulated Eduardo for his selection for the program and dedication to his academics.

“Eduardo has shown his commitment to his education and we are so proud to have him represent Lincoln Elementary and Lynwood Unified,” he said. “We can’t wait to see all that he accomplishes in the future.” 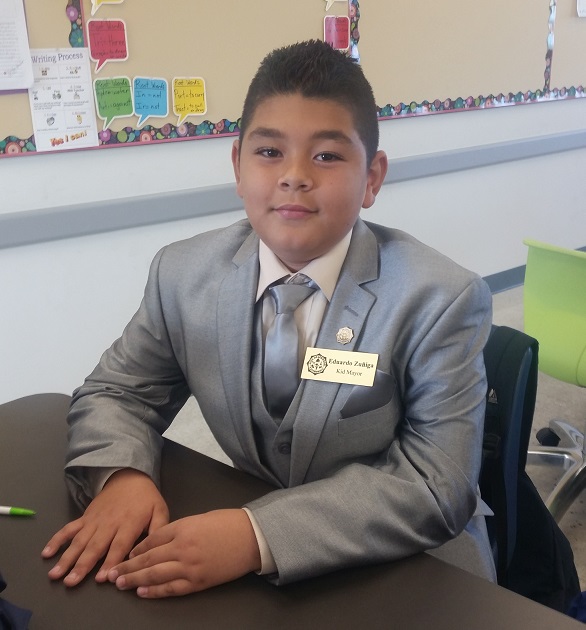