FONTANA, CA – Almeria Middle School special education teachers Michelle Goodrow and Kitzia Jackson are accustomed to working long hours as they help students with moderate or severe disabilities develop the skills they need to lead healthy, independent lives. The educators’ dedication and accessibility often makes them a part of their students’ family.

For their diligence and hard work, Goodrow and Jackson were honored by California State Sen. Connie Leyva with Certificates of Recognition during a ceremony at Almeria Middle School on March 11 in front of family, friends, and special education students. The teachers also received Excellence in Education certificates from Almeria Principal Felix Jones.

“As special education teachers you are ensuring that our students have what they need to be successful,” Leyva said. “Thank you for all that you do. It has been a challenging time the last two years and I don’t know how you did it. As a mother who has seen the impact great teachers have had on my own daughters, your work is truly appreciated.”

Goodrow and Jackson were nominated for the recognition by Almeria parent Elaine Jones, whose son Eric has autism. Goodrow has worked with Eric – now an Almeria eighth-grade student – since he was in the second grade. Jones, who serves as a volunteer at Almeria and is a member of its school site council, praised the teachers for their compassion, empathy and around-the-clock availability.

“I want to say thank you. You mean so much to me and my family,” Jones said. “It takes so much to be a special education teacher. There are only so many Starbucks gift cards you can hand out in appreciation. I wanted to show my gratitude in a way that lets them know just how much they are changing the lives of our kids for the better.”

Goodrow has been with the District since 1998, working at several Fontana Unified elementary and middle schools. Goodrow also is a member of the Autism Society Inland Empire and helps coach Challenger Division Pop Warner football for Fontana children with disabilities, ages five to 16.

“I am very honored to be recognized,” Goodrow said. “It’s the smiles and accomplishments that stay with you. Every student needs to have the opportunity to get the tools to communicate. I’ve known Elaine and Eric for many years and seen so many kids grow up. I’m a little shocked at the recognition. I don’t have many words.”

Jackson was hired by the District in 2012, and began her career path at Almeria as a special education aide in 2007.

“I am extremely thankful that Michelle and I are being honored for the work we do,” Jackson said. “Seeing the students become independent, seeing them grow, this is why we do what we do. Over the years you see how the effort you put in really helps them to develop. Michelle and I put our whole heart into everything we do.”

After recognizing the teachers, Leyva met with female members of Almeria’s Leadership Development program, answering questions and encouraging the students to embrace their individuality and ability to make change in the world.

“This is a special day at Almeria. We are absolutely delighted to see Ms. Goodrow and Ms. Jackson honored by Sen. Leyva for going above and beyond and establishing deep emotional connections with the students and their families,” Felix Jones said. “The time that Sen. Leyva spent with our leadership students will be invaluable to their development and serve as an inspiration going forward.” 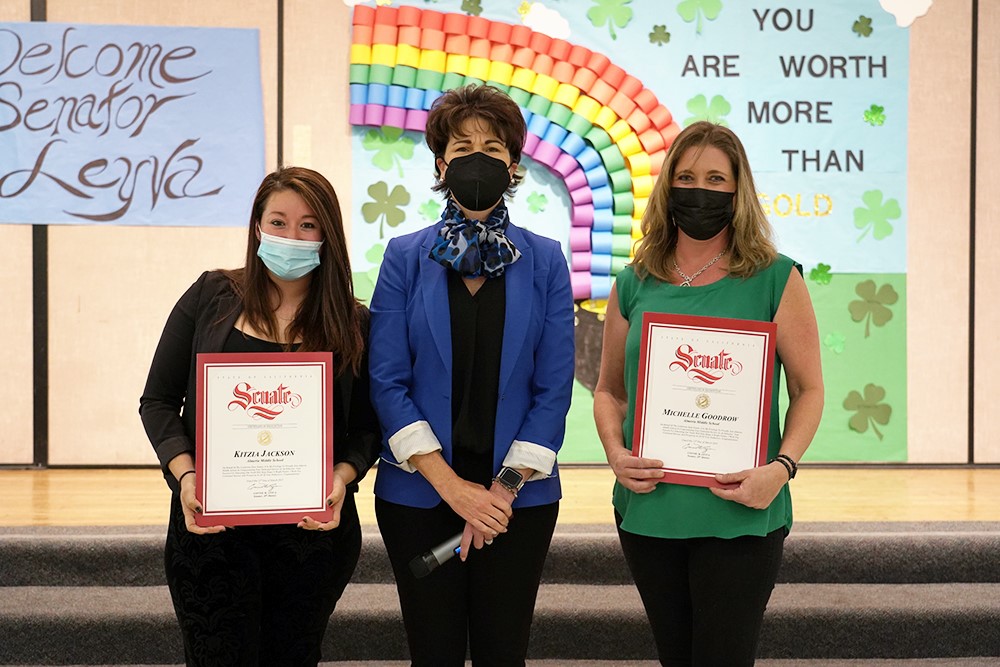