EAST WHITTIER – East Whittier City School District’s Leffingwell Elementary School has been recognized as one of the nation’s top schools, one of only 30 schools nationwide to be designated as a 2017 National Blue Ribbon Exemplary Achievement Gap Closing School, the U.S. Department of Education announced on Sept. 28.

Leffingwell will join 342 National Blue Ribbon recipients at a special celebration in Washington D.C. November 6-7, when they will be officially recognized for their success in creating a school culture that engages, motivates and inspires diverse student groups to work hard and reach for their potential.

“Leffingwell has an amazing staff that has created a culture of keeping kids at the center of all we do, making school fun and engaging while maintaining high, rigorous expectations for every student,” Leffingwell Principal Scott Blackwell said. “We’re challenging students to do their best and providing interventions to support those who may be struggling, ensuring that all students receive an equitable educational experience.”

Leffingwell Leopard Paw Pride was in evidence everywhere as Blackwell made the official Blue Ribbon announcement during the school’s regular Friday flag salute for students, parents and staff on Sept. 29.

Teachers and PTA members spent the previous night decorating the campus with balloons, ribbons and banners heralding the recognition. Leffingwell students came to school dressed in blue shirts adorned with Leffingwell’s 2017-18 academic theme – Pirate Leopards “On the Quest for Knowledge.” At the conclusion of the ceremony, Leffingwell students and teachers performed a dance to Britt Nicole’s “Gold,” chosen for its message of inclusion and lyric, “You are worth more than gold.”

“My favorite subject is reading and the teachers are awesome. Dr. Blackwell is really nice,” Browne said. “I am looking forward to middle school, but I will miss attending Leffingwell.”

In 2016, Leffingwell was nominated by the California Department of Education to apply for the Blue Ribbon. To qualify for the award, each student subgroup must be ranked in the top 15 percent of all schools in the state, based on state assessments in English language arts and mathematics. Schools are also evaluated on their core curriculum; instructional methods, intervention and assessments; school leadership; school climate; engagement of families and community; professional development; and strategies for academic success.

“This is a tremendous honor for East Whittier City School District, the embodiment of our mission to provide all students the opportunity to achieve at high levels, to become lifelong learners and to work together to celebrate their talents and diversity,” Superintendent Marc Patterson said. “Congratulations to our Leffingwell teachers, staff, administrators and parents for working hard every day to bring their community together.”

Leffingwell, which began as an East Whittier City Developmental Center for students with disabilities, became a general education campus in 1990, successfully uniting general and special education students around a balanced, comprehensive standards-aligned curriculum that is enhanced by Visual and Performing Arts (VAPA) instruction and extracurricular activities, best exemplified by their longstanding annual tradition, the Leffingwell School Musical.

LEFFINGWELL_BLUERIBBON1: Leffingwell Elementary School students show their school spirit during a ceremony commemorating the school’s designation as a 2017 National Blue Ribbon School by the U.S. Department of Education on Sept. 29. Leffingwell was recognized for its success in narrowing the achievement gap, one of 30 schools nationwide to be named an Exemplary Achievement Gap Closing School.

LEFFINGWELL_BLUERIBBON2: Leffingwell Elementary School Principal Scott Blackwell tosses confetti in the air, celebrating the school’s designation as a 2017 National Blue Ribbon School by the U.S. Department of Education on Sept. 29. Leffingwell, recognized for their success in narrowing the achievement gap, will join 342 National Blue Ribbon recipients from across the country at a formal reception in Washington D.C. on Nov. 6-7. 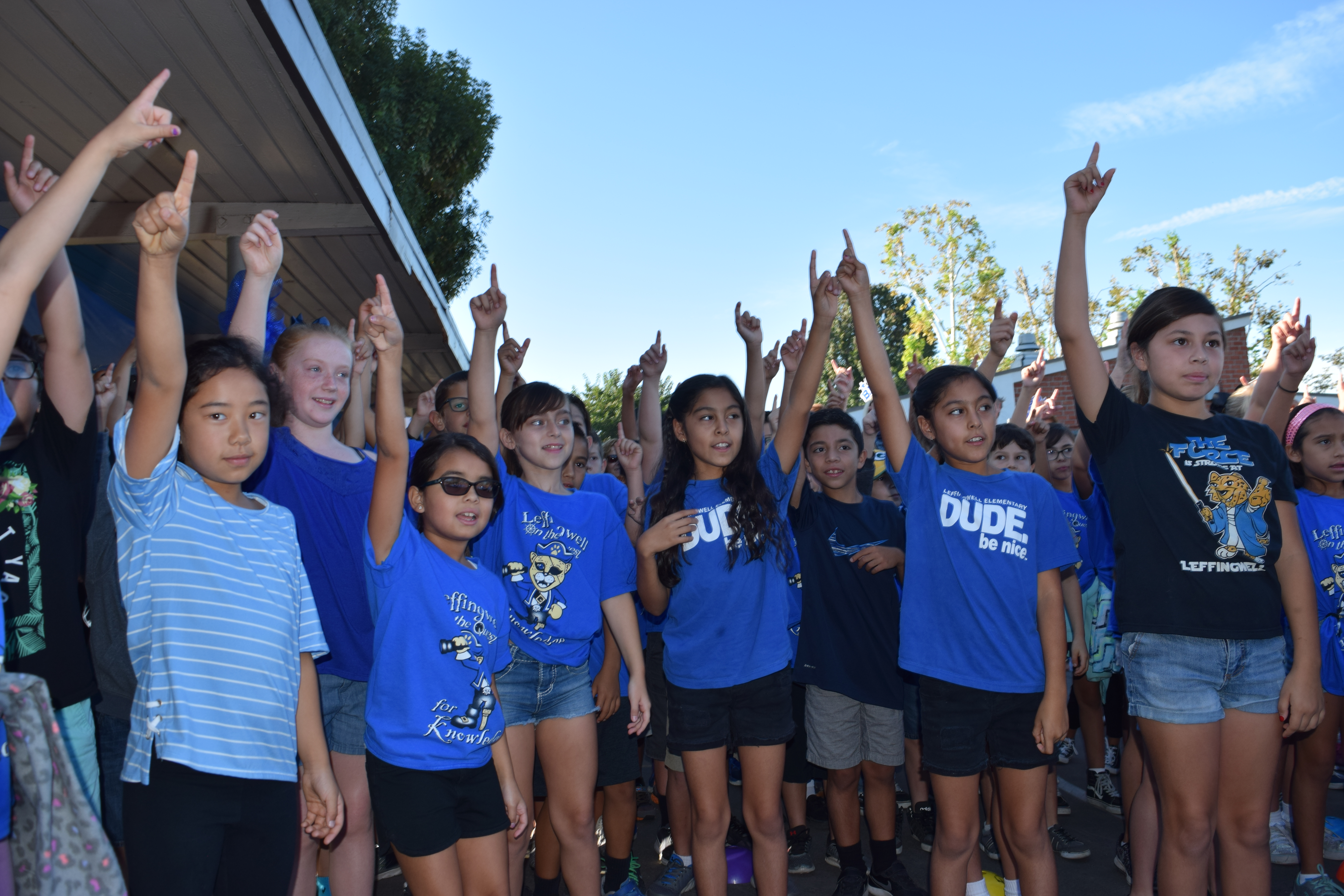 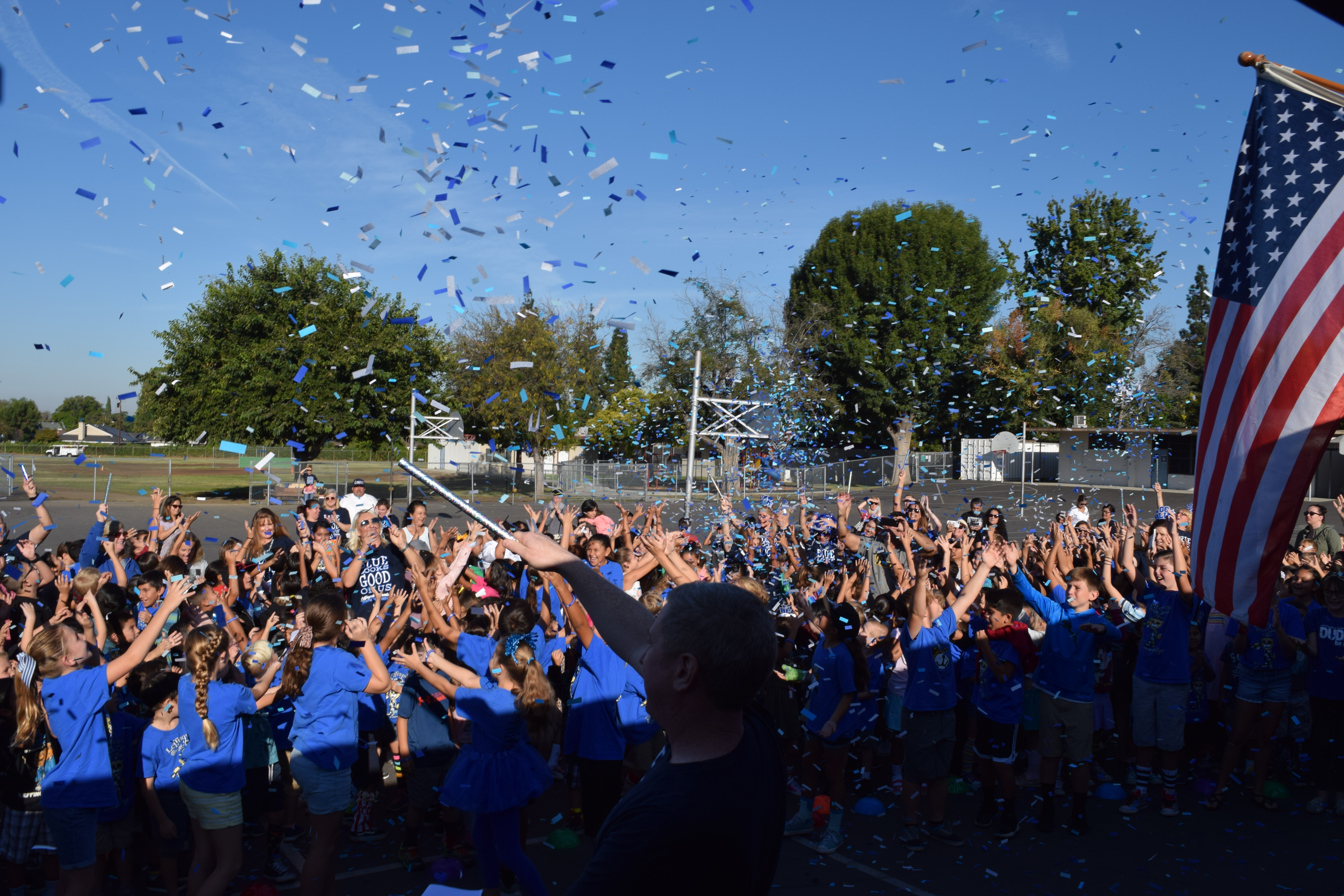