POMONA – A group of seniors enrolled in Village Academy’s National Academy Foundation (NAF) Information Technology program are gaining first-hand knowledge of the creative development and technical production of Cal Poly’s Rose Float for the 2016 Pasadena Tournament of Roses Parade – a painstaking process that will be captured in the students’ new documentary film.

The film will debut at the District’s annual “PINDIE” Pomona Independent Student Film Festival in 2016.

“This project presents our students with a fantastic opportunity to learn from experienced individuals in their respective fields and enables them to explore possible careers in television and film production,” said Board of Education President Adrienne Konigar-Macklin. “It’s very exciting to see our students putting into practice what they’ve learned. We look forward to seeing the complete film later this year.”

As a National Academy Foundation school, Village Academy offers several multimedia and technology career pathways that adhere to a rigorous curriculum that prepares students for career opportunities in fields such as digital video media production.

“Village Academy has gone through the rigorous process of instituting the NAF curriculum, and our students are benefitting to an incredible degree, with many of them going on to colleges such as Cal Poly Pomona and excelling,” Principal Marco Sanchez said. “We’re so proud of our students for undertaking this challenging project.”

In addition to connecting what they are learning to the NAF curriculum, these student filmmakers are also gaining fieldwork experience for industry-level internships.

“This project has incorporated a 21st century learning paradigm in which students are working with computers, cameras and audio gear, gathering news electronically and using technology for collaborative communication,” Baker said. “It’s incredible to see the twinkle in their eyes. They are so looking forward to seeing the end result.”

Students have been gathering footage, interviewing representatives and researching the history of the Tournament of Roses Parade and Cal Poly float, which began participating in 1949 and is built from the ground up by students from Cal Poly Pomona and Cal Poly San Luis Obispo.

“This documentary project is another great example of how Cal Poly Pomona can help provide unique experiences and opportunities for students in our local community,” Cal Poly Pomona President Soraya Coley said. “It is so important for our children to see what college life is like so that they can be inspired to aim high. The Rose Float documentary gave them the chance to meet college students and to see Cal Poly Pomona’s learn by doing philosophy in action.”

Interim Rose Float Director Janetta McDowell said that she hopes the partnership will grow even greater in the future.

“It has been a pleasure working with the staff and students of Village Academy,” McDowell said. “I am continually impressed with the level of professionalism, commitment and dedication that the students display each time I see them.”

Students also observed KTLA reporter, technicians and producers during a recent production of a live morning broadcast, “The Tournament of Roses Preview.” KTLA has broadcast the parade annually since 1948.

Di Bella has been participating in the project through weekly production meetings via Skype, while Baker has worked with students to develop their electronic field production skills. Di Bella will join the team during the week of the tournament.

“We’re sharing skills with them, but we’re also sharing life experiences that they might not get otherwise,” Di Bella said.

Students are expected to complete the documentary in time for the PINDIE Festival, which showcases student films and works, in May 2016.

“Students have been eagerly working on this film, learning from pros and gaining in-the-field experiences that are crucial to developing their skillsets,” Superintendent Richard Martinez said. “Cal Poly Pomona has been a great community partner to Pomona Unified’s students, and we all look forward to our students’ accomplishments.” 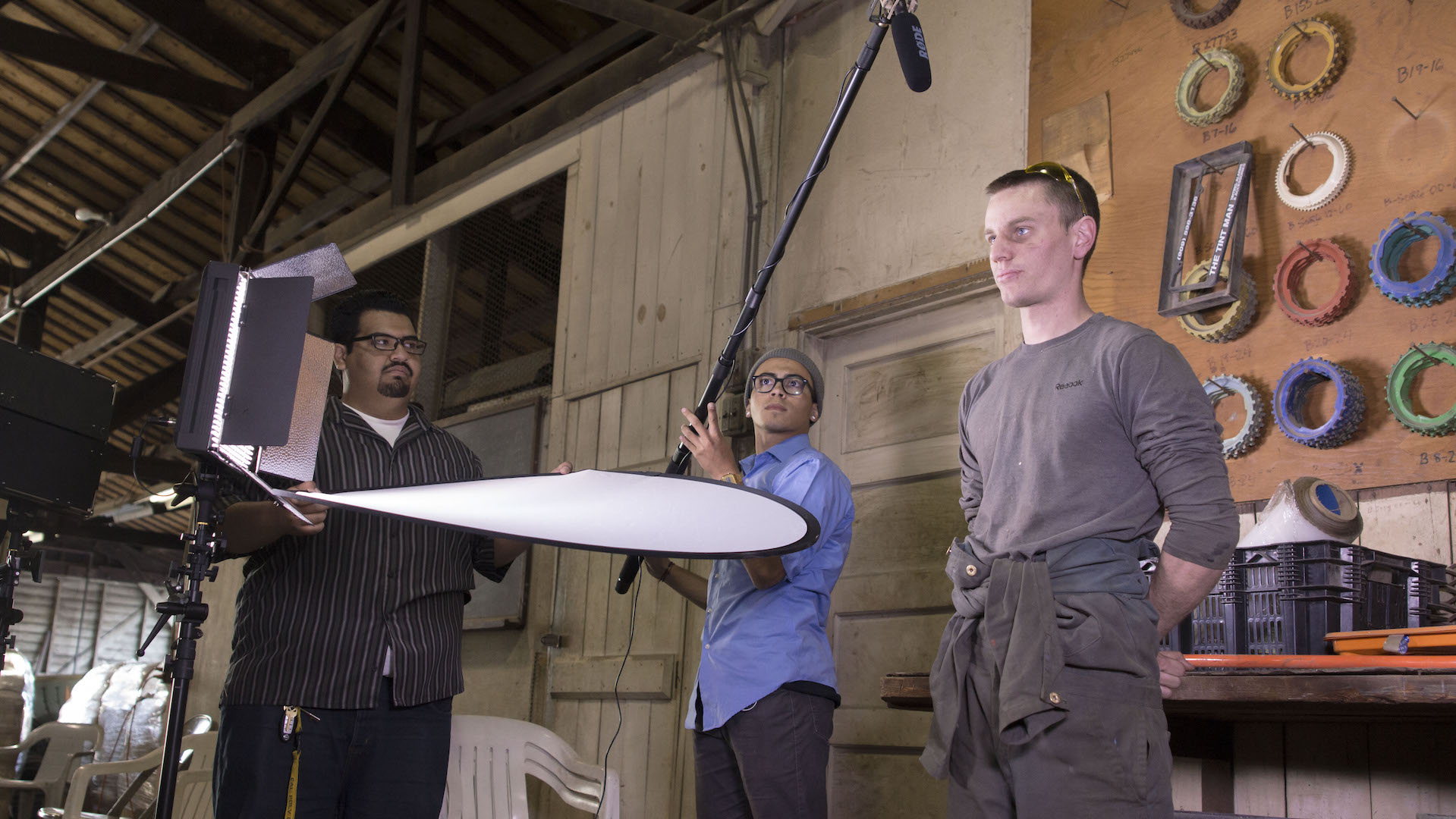 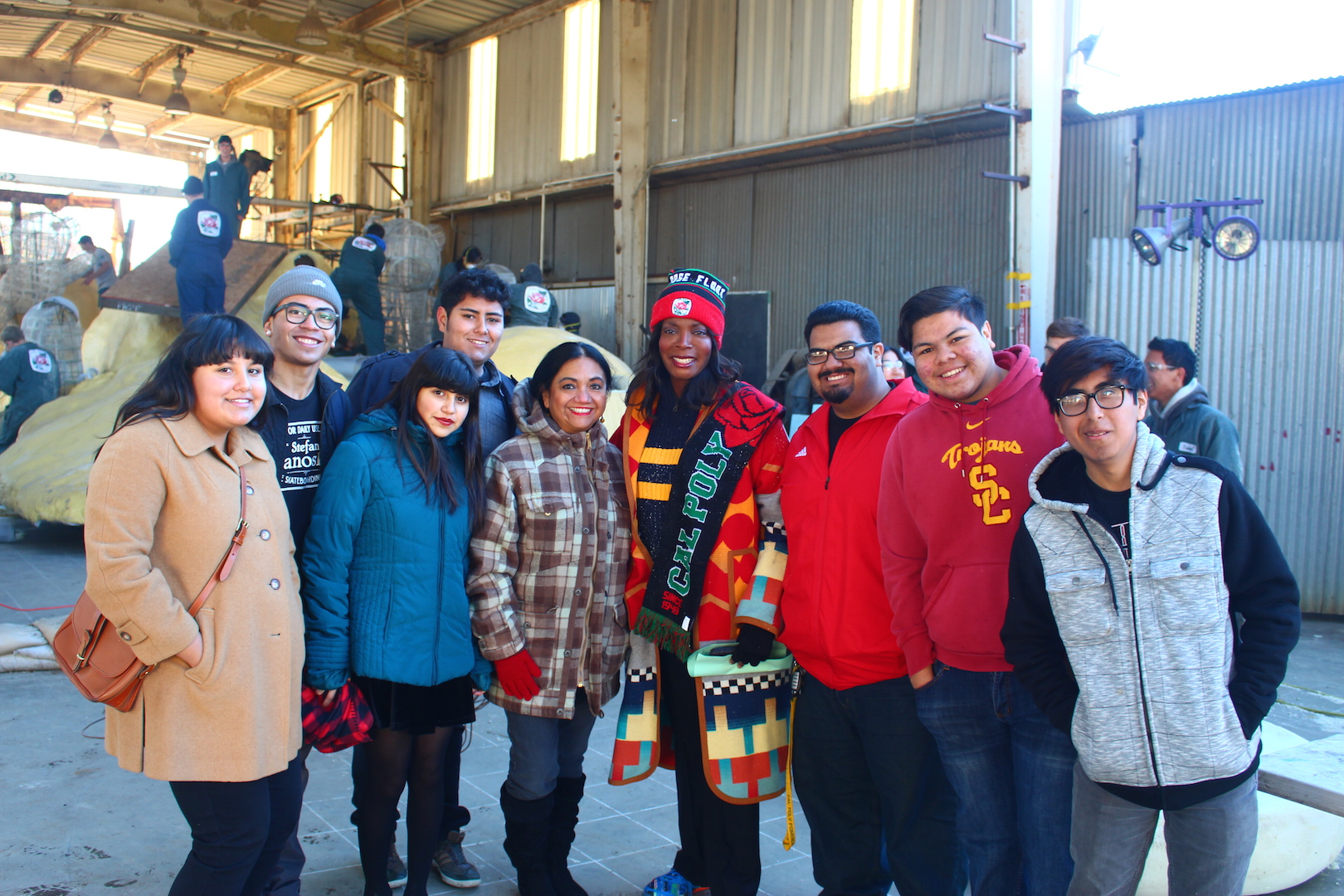