Sporting matching gray suits and bow ties, seniors Jared Cohen and John Ramirez received the top score of the March tournament for their interpretation of Mel Brooks’ comedy “The Producers” – adapting the feature-length film into a 10-minute performance filled with snappy dialogue, singing and dancing.

The duo will travel to Dallas in June to compete with fellow high school student champions representing the 110 district tournaments held regionally throughout the nation in the largest competition of its kind in the world.

“Jared and John have enjoyed great success since joining Speech and Debate last year because they are confident communicators and have excellent stage presence,” said Cal High Speech and Debate adviser Allison Huntley. “Since both students were previously involved in drama, we knew they both had a lot of potential to excel if they joined our program, and we are so proud of their accomplishments.”

Cohen and Ramirez chose to enter the duo interpretation competition, with their initial inspiration to create the piece stemming from two sources: their mutual affinity for the film and desire to find a challenging, creative project that could incorporate singing into a competitive performance piece.

“This is one of the greatest challenges I’ve ever had, and it’s been an exciting and amazing learning experience along the way,” Cohen said. “I look forward to showing the nation what Cal High Speech and Debate has to offer.”

Drawing on their backgrounds in the dramatic and performing arts, Cohen and Ramirez watched the film carefully, taking copious notes and selecting key scenes to incorporate into their performance. They worked with Huntley, as well as the team’s co-adviser Kristina Flores, to iron out the flow and content.

“To be able to go to the National Tournament is a dream in the making, and I’m proud of my partner and school and am thankful to Ms. Huntley for getting us to this level,” Ramirez said.

Prior to competing in the East Los Angeles competition, the duo’s “Producers” performance drew high marks at competitions earlier in the academic year – earning a first-place designation at La Costa Canyon High School’s Winter Classic Speech and Debate Competition in December and qualifying as a finalist at UC Berkeley’s Speech and Debate Tournament in February.

“These talented students have taken their commitment and passion for speech and debate to the highest level, undergoing countless hours of coaching and regular practice to ensure their work is flawless,” Whittier Union High School District Superintendent Sandra Thorstenson said. “I want to congratulate Cal High and the advisers for achieving this amazing feat and helping our students reach success. I wish them the best of luck in the competition.” 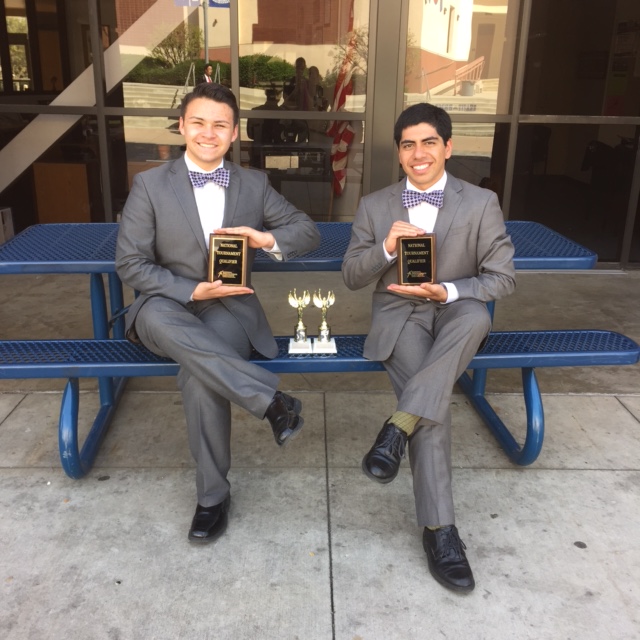