BUENA PARK, CA – Beatty and Buena Park middle school students beamed with positivity and filled an entire stadium with their cheers during their promotion celebrations on May 26, which marked years of academic success and the end of their educational journeys at Buena Park School District.

The ceremonies, held at Buena Park High School, allowed families to cheer on students while safely maintaining social distancing and following health guidelines. The event included messages of encouragement from District administrators and teachers from both middle schools. This was the first in-person middle school promotion for District students since 2019.

First-place Distinguished Scholar for Beatty Middle School Darine D., who has participated in journalism, Club Live and the Associated Student Body during her years in the Buena Park School District, said she was honored to be one of the highest achievers of her promoting class.

“I’m always looking for ways to boost my communication skills and engage with others – like younger students and even adults,” Darine D. said. “I found all the programs I participated in while at Buena Park School District very helpful – especially in developing leadership roles. Communication is a fundamental skill when you lead others and it’s something I always try to improve upon.”

Darine. D. said she does not know which high school she will attend next year, but that Buena Park School District has prepared her for whatever steps come next.

“We are so proud to know she is one of the top three promoting students,” said Catherine D., mother of Darine D. “She’s an achiever and is always focused on her studies.”

Mauricio Manriquez L., first-place Meritorious Award winner for Buena Park Middle School, thanked his teachers for being kind and helpful and wished his classmates luck in their futures.

Following the ceremonies, family members and friends celebrated and gave cheerful hugs to the middle school alums while showering them with balloons, flowers and leis.

“I would like to acknowledge our students for their talent, effort and the determination they showed this year,” Superintendent Dr. Ramon Miramontes said. “This promotion is just the start of our students’ greatness – from here they will all go on to do amazing things and impact the world. We are proud to be the spark that ignites their passion for learning.”

Above and Beyond Award
Riley M.

AVID Stand Out Award
Lujain I.

BUENAPARK_GRADMS1: Beatty Middle School alum Darine D. rejoices after being named first-place Distinguished Scholar during her school’s eighth-grade promotion ceremony on May 26. Darine D. and 116 of her classmates were showered with cheers and praise during the day’s event.

BUENAPARK_GRADMS3: A Beatty Middle School alum laughs as her family members take her photo to memorialize her eighth-grade promotion. Beatty and Buena Park middle schools held their in-person promotions on May 26 at the Buena Park High School stadium. 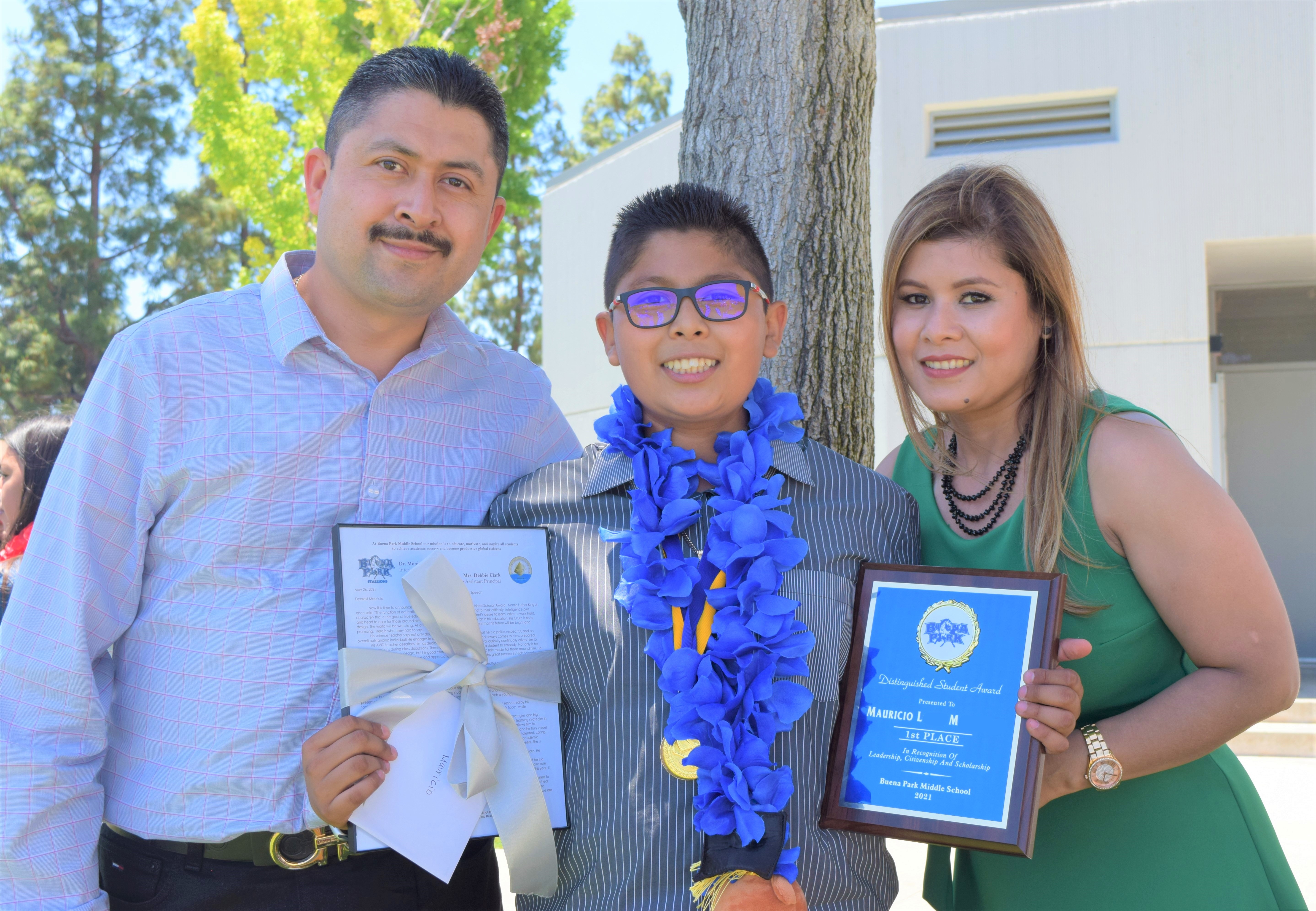 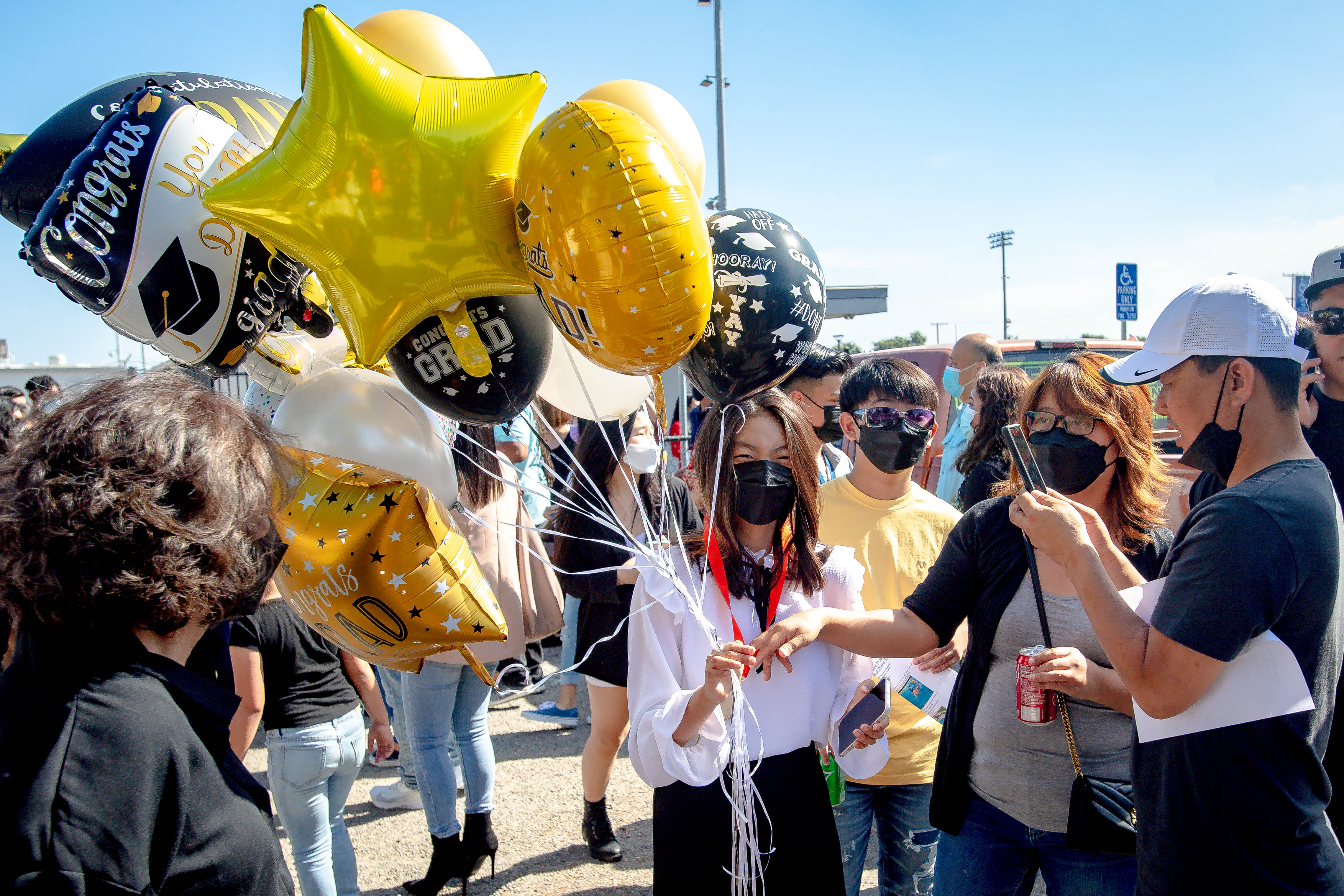 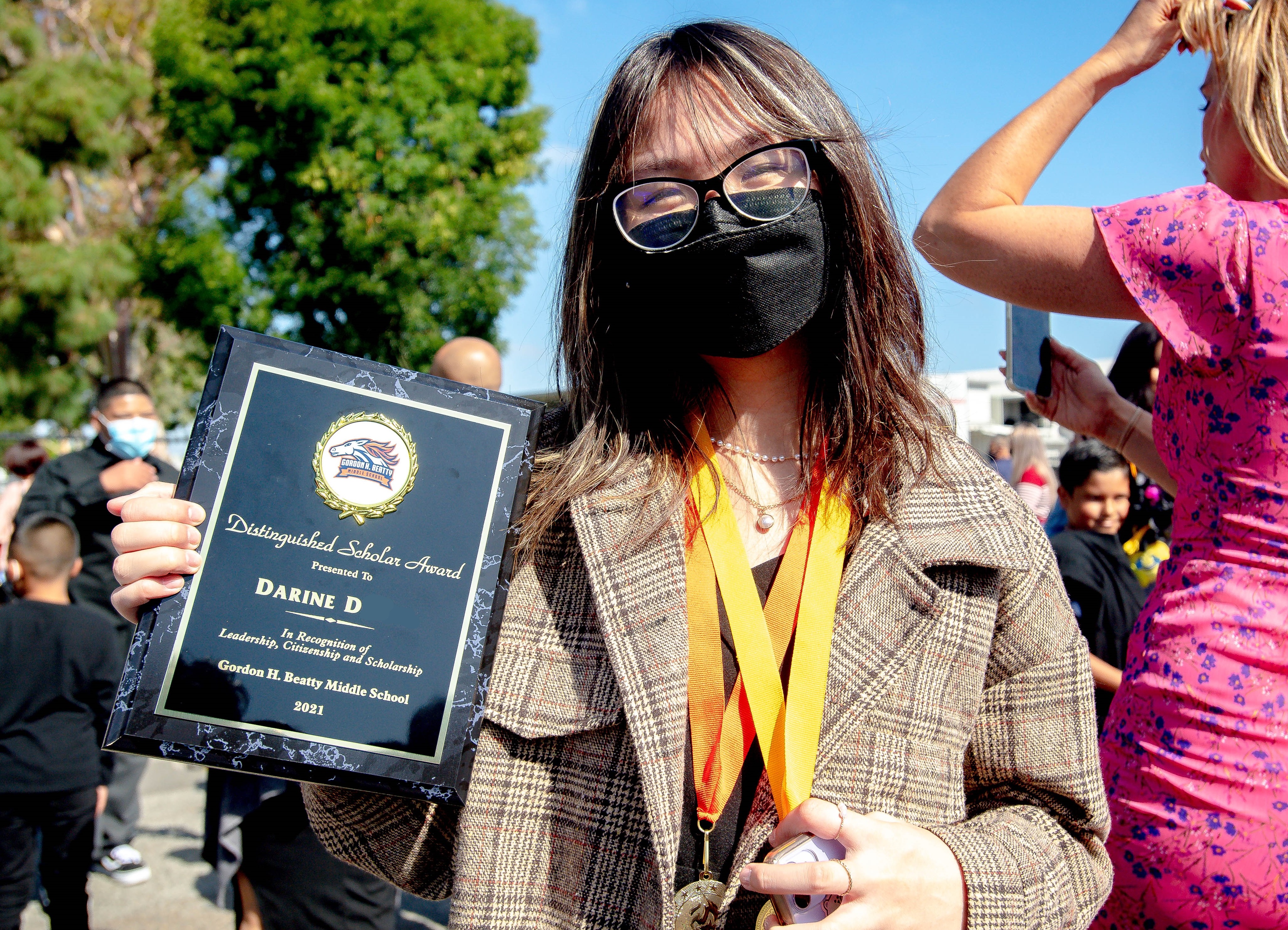