LAKEWOOD – Mayfair High senior Elizabeth McMahon is decked out in all black – from her windbreaker to her sunglasses – with just a gold chain to break the scheme.

And she isn’t alone.

LAFF club – its name stands for Learning Acceptance through Friends and Fun – is known for its annual videos and other programs designed to bring together Mayfair’s special education and general education student populations.

The club has about 100 members from Mayfair High School and Middle School – about evenly split between the two student populations.

“The video, like LAFF Club, is about connecting with each other, about making friends and about letting bullies know there’s a better way,” said McMahon, who is president of the group. “Like the club, it’s also a lot of fun, with plenty of laughing and dancing.”

LAFF club was launched eight years ago, but really took off after the school began holding an annual assembly featuring elements such as the video. This year’s assembly will be held at 8 a.m. Feb. 5.

“It’s really grown over the past few years and its impact on Mayfair’s campus has been noticeable,” said Lindsey Brown, a special education teacher who acts as the club’s adviser.

General education student leaders gather with Brown early in the week to plan the activities that will be featured in a Friday meeting of the full group.

“It’s a huge commitment,” she said. “A lot of them are involved in a lot of other activities – band, sports, as leaders in other clubs – but they still make time for this.”

The group holds a number of popular activities, including its annual pie-eating contest and end-of-year blowout. And almost every activity – like this year’s video – features dancing.

During December, club members practiced for their video, which is set to a rap song written by LAFF Club member Moises Delgado. The song celebrates the values of the LAFF Club, and includes lyrics such as “I’m eating bullies for breakfast if they don’t implement acceptance” and “It’s all about friendship around here boy; ain’t nobody about to take away this joy!”

Some students – like four-year member Emmy Patterson – quickly mastered a dance for the video, and dedicated their time to ensuring others would be able to keep up when they began shooting this week.

“My favorite part of LAFF is dancing,” Patterson said. “And I also like making friends.”

In addition to the dancing and singing, the annual videos are also big on silly-string and confetti – and the party-like atmosphere those two elements entail.

“LAFF Club really embodies our efforts to rip down the barriers between students in our general education and special education populations,” Bellflower Unified Superintendent Dr. Brian Jacobs said. “The message is about how we have far more in common than we think – as they have made fairly clear each of their videos.”

LAFF 1: Members of Mayfair High School’s LAFF Club pose during a video shoot to celebrate the club’s message of inclusion. The video – styled after a 1990s rap music video – will be shown at a school assembly in February.

LAFF 2: Silly string begins to fly during the shooting of a 1990s-style rap music video by members of Mayfair High School’s LAFF Club, a group that builds bridges between the school’s general and special education populations. 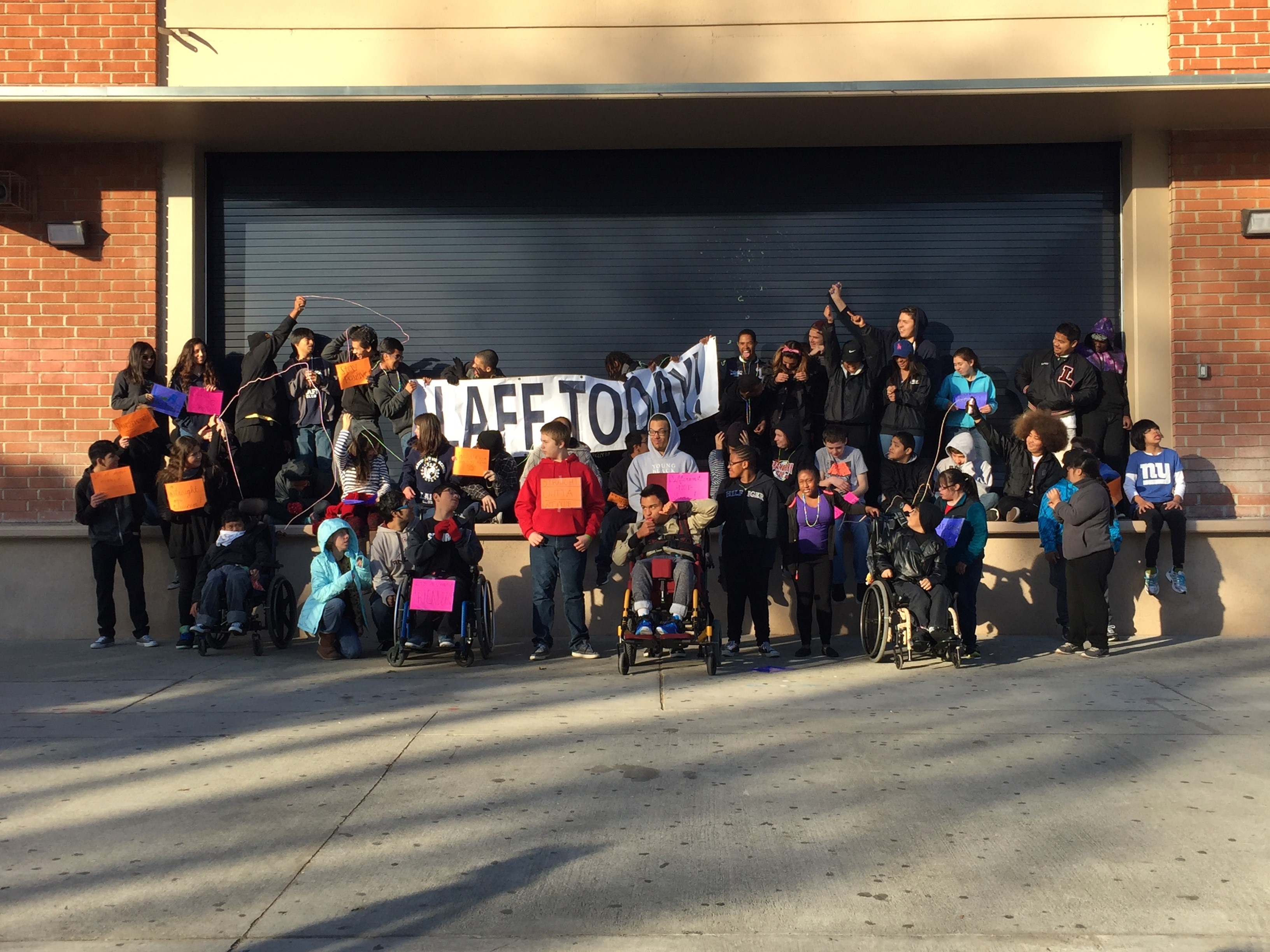 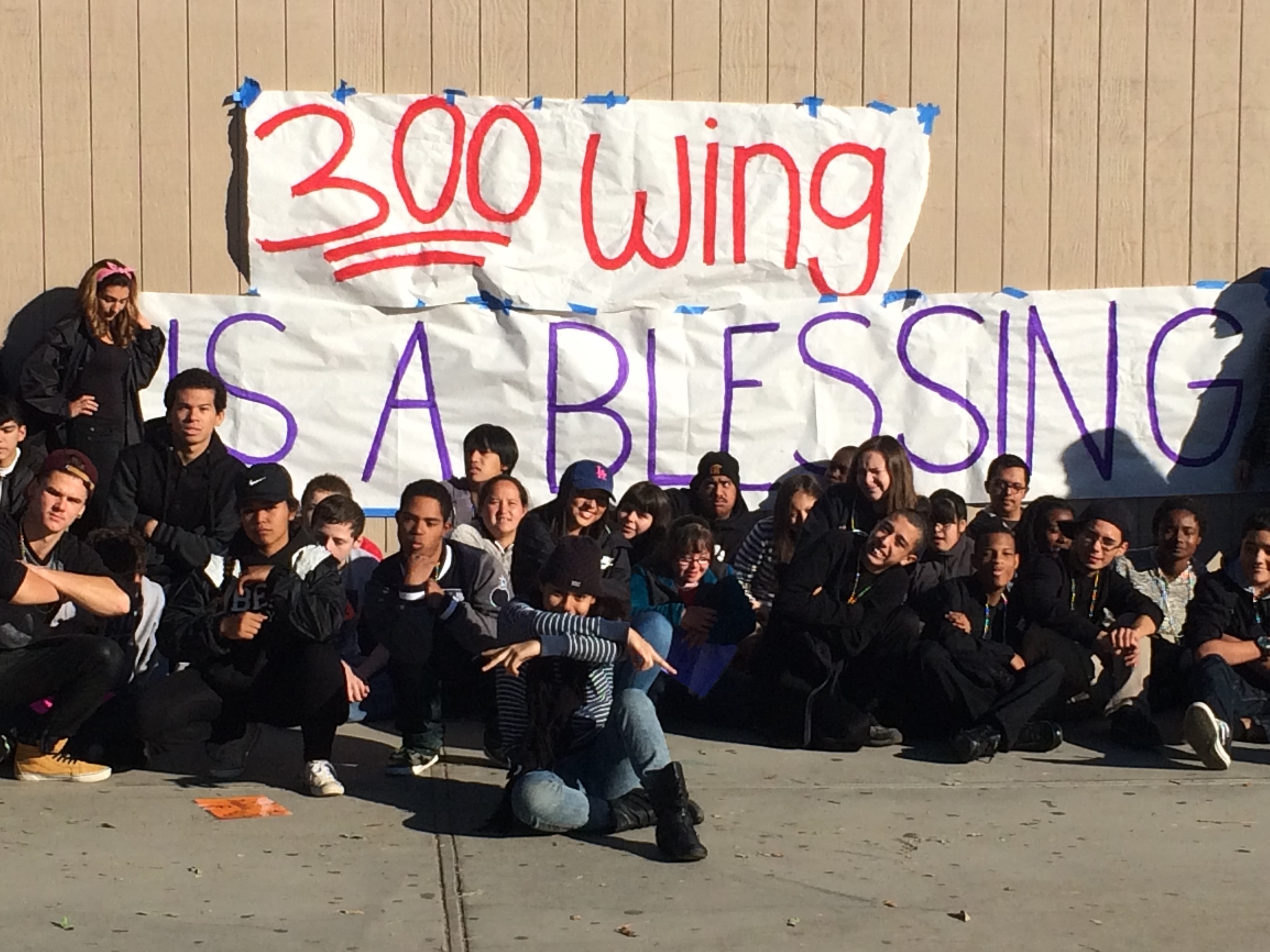