Five Bassett High students, portraying victims of a vehicle collision, sat stunned or lay unconscious in a pair of battered cars on April 19 as part of a program designed to bring home the real consequences of driving under the influence of alcohol or drugs, or driving while distracted.

More than 500 juniors and seniors watched the “Every 15 Minutes” program unfold from the sidewalks on April 19 – just 10 days before prom – as police cars, ambulances, fire trucks and coroner vehicles arrived at the scene of the crash.

Bassett High senior Ruben Bermudez played one of the drivers involved in the crash.

“It puts you in a position that you don’t ever want to be in,” said Bermudez, 17. “It makes me think about my decisions and how I don’t want to drink and drive.”

Before the staged accident, a costumed Grim Reaper pulled 13 students from their classrooms to be part of the “walking dead,” representing one person killed by drunk driving every 15 minutes. Their desks were vacant for the rest of the day, serving as memorials.

The “walking dead” stood in the background of the staged accident as the Grim Reaper claimed another life at the crash scene – a student sprawled face down on the hood of one of the wrecked cars.

“It is so important that the students understand the consequences of driving while under the influence or driving while using their phones,” Bassett High principal Gabriel Griego said. “This will help prevent tragedies from occurring in real life since the students are seeing their peers involved in a terrible crash right in front of them.”

One of the student drivers played the role of a drunk driver, pretending to fail a series of DUI tests by the police. He was arrested and taken to a sheriff’s station where he went through a staged booking.

Injured students were taken to a hospital and the “walking dead” visited a mortuary before spending the night at a hotel participating in workshops and activities without having contact with families or friends.

On April 20, an assembly was held at Bassett High School where the “walking dead” students clad in black, hooded outfits, followed their coffin into the gym for a funeral. Parents read eulogies for their children and the students spoke about their experience with the program. A documentary of the program was shown to all Bassett High School students, recounting the events of the two days.

“Bassett Unified is focused on the safety of every student,” Superintendent Dr. Alex Rojas said. “The ‘Every 15 Minutes’ program demonstrates the ramifications of unsafe driving, and the students will learn how to make responsible decisions independently and remove themselves from potentially dangerous situations.”

The program was held in collaboration between Bassett High and the California Highway Patrol, the Los Angeles County Fire Department and the City of Industry Police Department.

MOCKCRASH1: The Grim Reaper walks in front of a mock car crash involving five Bassett High School students on April 19, as part of the “Every 15 Minutes” program. The accident was staged in front of more than 500 students, bringing home the real consequences of driving under the influence of alcohol or drugs, or driving while distracted.

MOCKCRASH2: Bassett High School students stand in the background of a staged crash to represent a person killed by drunk driving every 15 minutes. The “Every 15 Minutes” program is designed to bring home the real consequences of driving under the influence of alcohol or drugs, or driving while distracted. 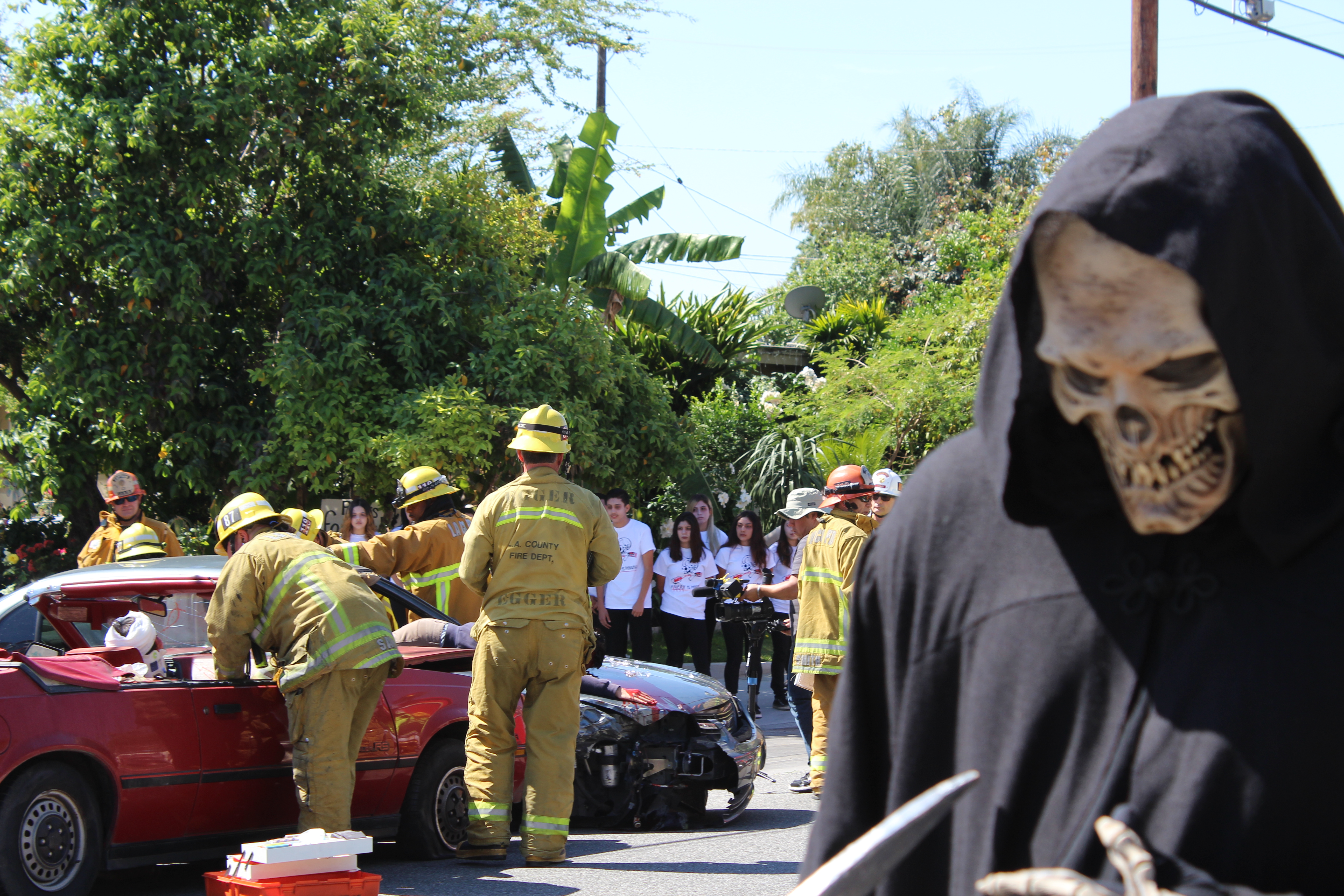 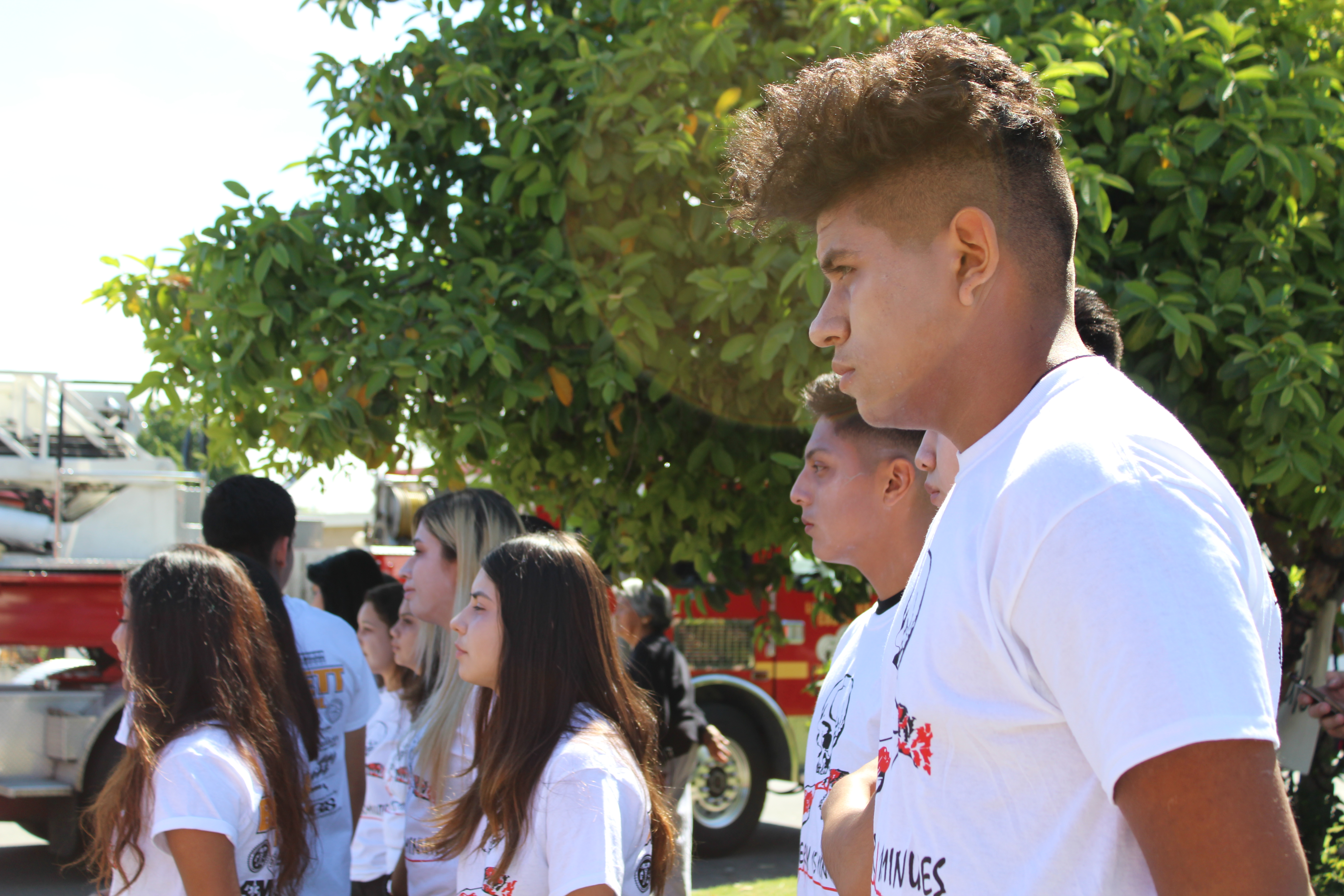