LA PUENTE, CA – A recording of screeching tires and the smashing blows of an auto collision echoed outside of Bassett High School as the Grim Reaper paced the staged scene of a two-car crash, marking the start of the “Every 15 Minutes” program.

The two-day program on March 20-21 presented the unforgiving consequences of driving while under the influence of alcohol or drugs by displaying a series of scenarios, beginning with a simulated car crash presented to Bassett High juniors and seniors.

“Many teens think they are invincible but this goes to show what horrible things happen when someone chooses to drink and drive,” Bassett High senior Diane Orozco said. “I wouldn’t want to see anyone as a victim of something that can be avoided.”

The simulated crash, held March 20, included a mock student arrest, emergency responders accessing the scene and firefighters cutting open totaled vehicles to retrieve survivors. One fatality was declared by a medical examiner before the student actor was carted into the coroner’s van.

Throughout the day, the Grim Reaper pulled selected students from classes to become the “living dead,” representing 20 lives lost to drunk driving. With faces painted pale-white, the “living dead” students gathered by the simulation and later participated in an overnight retreat to reflect on the event and to write letters to family.

“People die way too often because of DUI-related crashes – something that is totally preventable,” California Highway Patrol officer Rodrigo Jimenez said. “There is no better program to affect and influence new and future drivers to keep them safe and smart.”

On March 21, students and family members of the “living dead” gathered in the gym to watch a short film on the previous day’s simulated crash. The dramatization continued at a hospital with one of the injured students dying while his mother mourned over his body.

A mock funeral was held for the “living dead” students, with parents delivering eulogies through broken words and tears. Two student participants read letters of loss and regret, describing what they believed would be the impact of being involved in or affected by drunk driving-related crashes.

“This program is really tough and heartbreaking, but hopefully it teaches everyone to think about what we are doing,” said Alissa Castillo, a senior and one of the “living dead” students.

Guest speaker Joshua Jahn shared a personal story of loss to give life to the people behind the statistics. Jahn’s wife, 3-year-old son and 11-month-old daughter were killed when a drunk driver going more than 70 miles an hour hit his family’s car. He now works to bring meaning to their deaths and to prevent similar devastation for others.

The program was held in partnership with the Los Angeles County Industry Sheriff’s Department. “Every 15 Minutes” launched in 1990 to challenge high school students to take responsibility for mature and safe decisions and understand the impact their choices have on others.

“This program brings to light the students’ responsibility for their own safety and security when they are not at our schools,” Interim Superintendent Debra French said. “Thank you to all of our community organizations and Bassett High staff for bringing home the real consequences of drinking while driving.”

032818_BASSETT_HIGH_SCHOOL_EVERY15 _1: The Grim Reaper surveys the destruction at the “Every 15 Minutes” program’s drunk driving crash simulation at Bassett High School on March 20.

032818_BASSETT_HIGH_SCHOOL_EVERY15 _2: Bassett High School hosted the two-day program “Every 15 Minutes” on March 20-21 with selected students being pulled from classes to become the “living dead,” representing 20 lives lost to drunk driving. 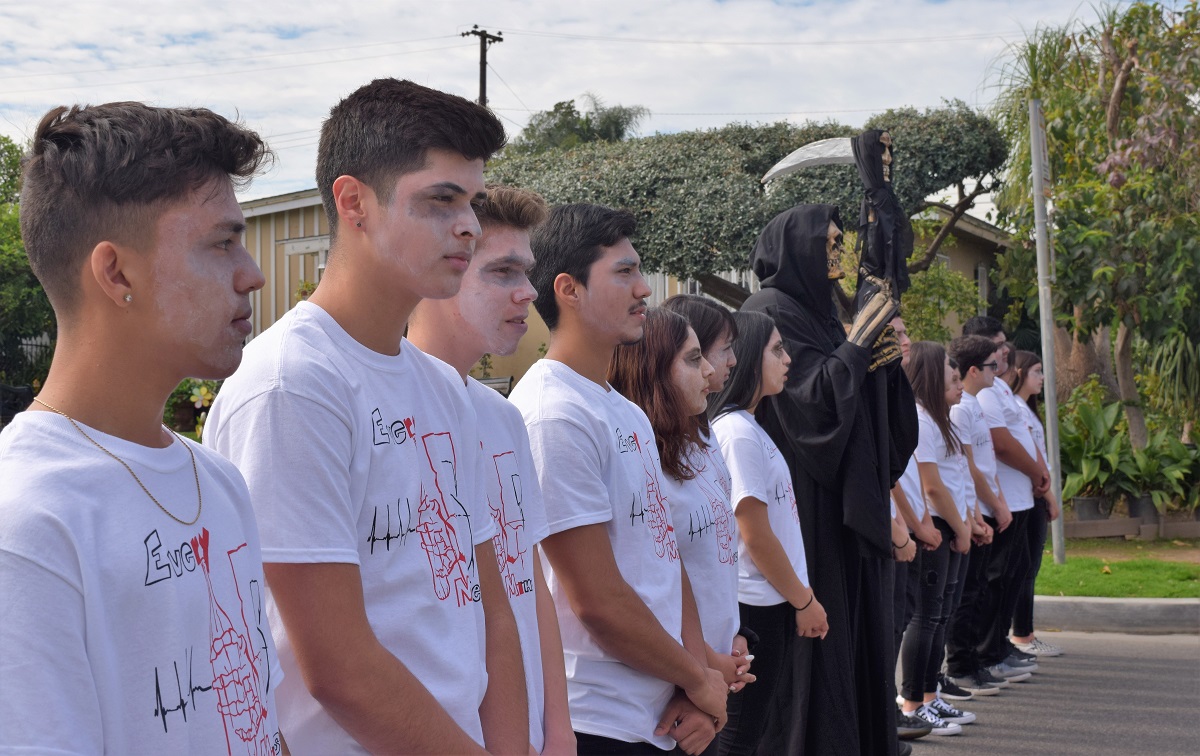 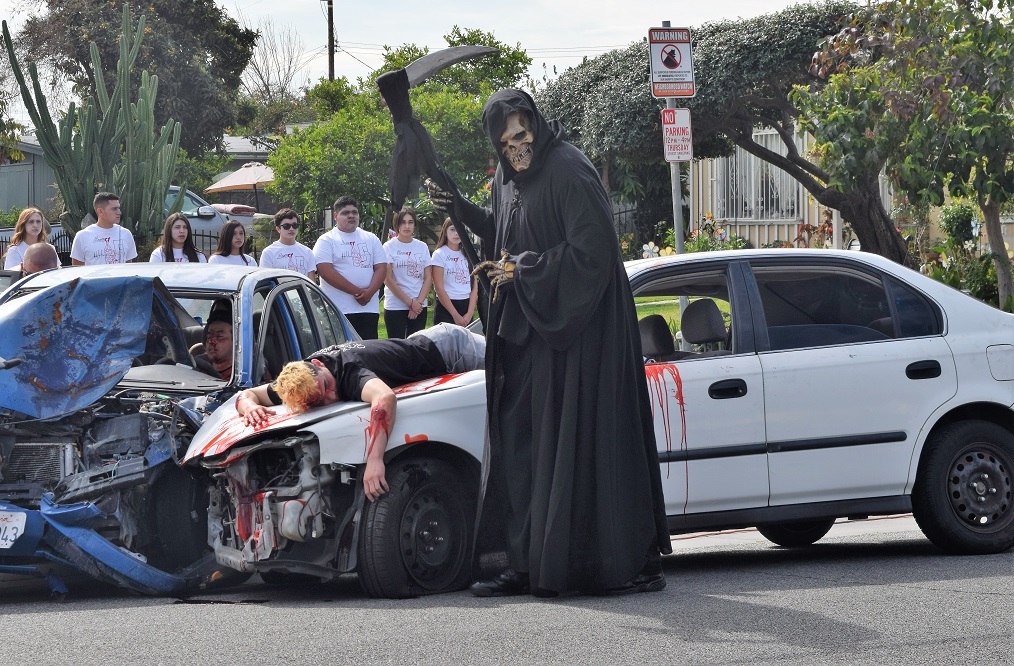