BALDWIN PARK – Baldwin Park Unified dedicated Sierra Vista High School’s stadium to retired board member Jack B. White on Sept. 22 during an emotional evening filled with testimonials from community leaders about how White’s decades of service have transformed the city and its schools.

The stadium’s new name – Jack B. White Stadium – was unveiled during a halftime presentation along with a bronze plaque recounting the impact of White’s 22 years on the school board, 10 years as city mayor and leadership of community sports leagues.

White championed the construction of Sierra Vista and Baldwin Park high school stadiums after watching his grandson, Jack, play football at a much nicer stadium in San Diego.

Board of Education President Christina Lucero said during a series of testimonials before the halftime ceremony that White had great influence on many people.

“He is someone who will share his experience, his wisdom and just his life with you,” Lucero said. “I’m incredibly, incredibly blessed to have met you, to call you my friend, my mentor. I just love you, Jack.”

Many, like Lucero, said White and his wife mentored them as they pursued community service.

More than a dozen community leaders, including Assemblywoman Blanca E. Rubio and Baldwin Park’s mayor, echoed Lucero’s praise for White’s dedication and service, and thanked his wife, Edna, and family members for supporting Baldwin Park over the years.

Rubio – a former Baldwin Park Unified board member – said White understood the fields were about more than just sports.

“Jack saw beyond what people thought of Baldwin Park,” Rubio said, tearing up. “Those fields out there are beautiful, but they represent more because Jack saw the potential in our students and in our community…To a kid that is not used to going to fancy places, it means that we believe in them, and Jack you believed in them.”

“I am honored and humbled to call you my mentor, my friend, family,” she said. “You deserve this and much more.”

White said he was moved by the praise.

“I’m in awe of what has been said here tonight,” he said. “I always got more than I gave. I thank you all very, very much.”

During the halftime ceremony, White shifted credit for the fields to the community.

“It was your parents, your families and the community that built this field,” he said as students cheered. “Play hard and win.”

Superintendent Dr. Froilan N. Mendoza said the bronze plaque, which weighs nearly 50 pounds, will be mounted by the stadium snack bar in the coming weeks.

“This was an incredible evening; it is definitely one to remember,” Dr. Mendoza said. “We want to thank Mr. White and his family for their years of dedication and service to the community and to the Baldwin Park Unified School District.”

BPUSD_WHITE_1: Former Baldwin Park Unified board member and mayor Jack B. White stands with his grandson, Jack, after the dedication of Sierra Vista High School’s stadium in White’s honor on Sept. 22. White got the idea to construct top-of-the-line stadiums in Baldwin Park after watching his grandson’s team play in a beautiful stadium in San Diego.

BPUSD_WHITE_2: Former Baldwin Park Unified board member and mayor Jack B. White stands with a plaque that will be mounted at Jack B. White Stadium at Sierra Vista High School. The stadium was dedicated to White on Sept. 22. 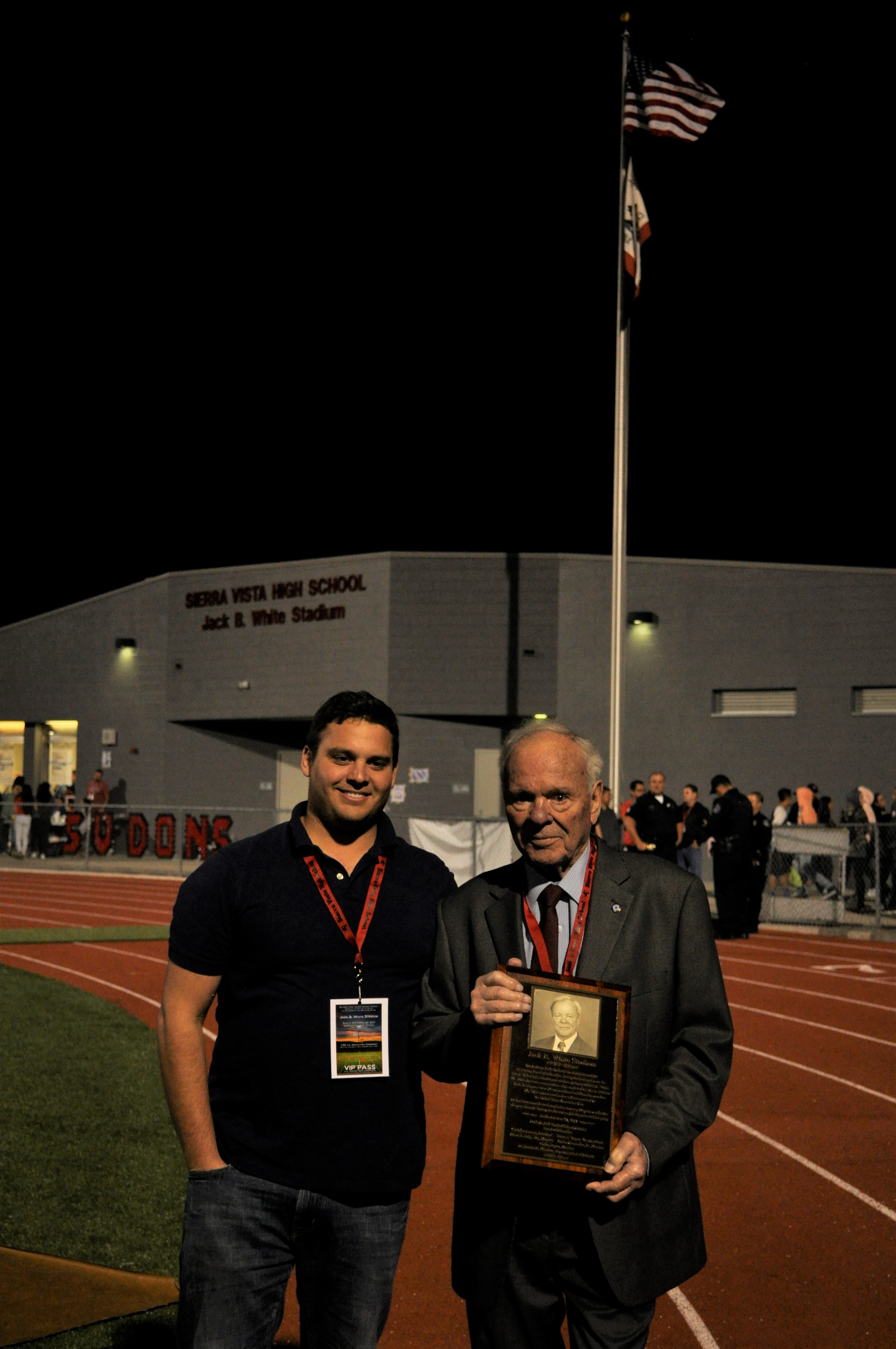 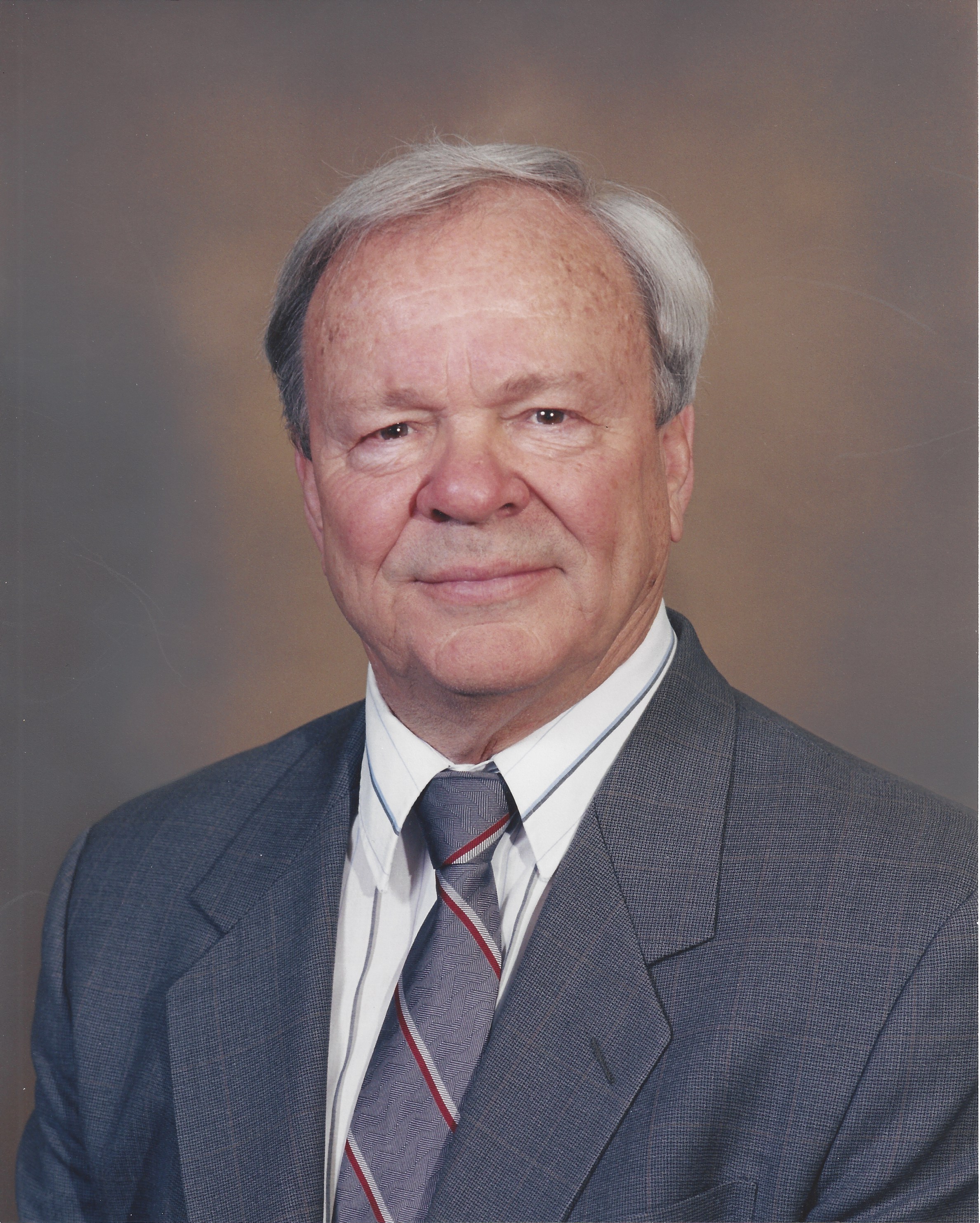 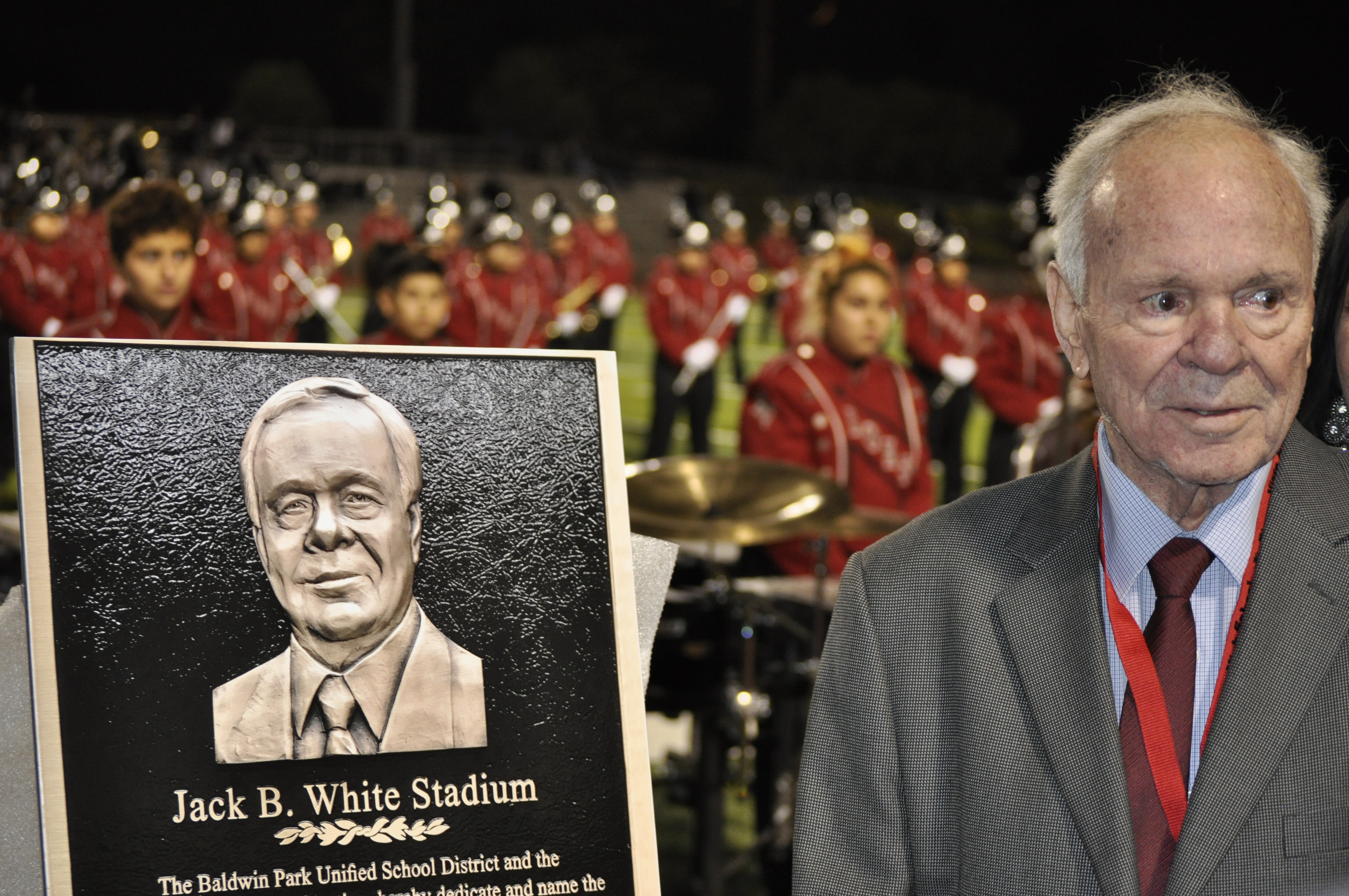