Jonathan, a previous contender in the District Spelling Bee, was among the top two spellers from 13 elementary schools and two middle schools chosen to participate.

“All of us here at Baldwin Park Unified are immensely proud of Jonathan’s success in the District Spelling Bee and wish him the best as he represents the District at the county level,” said Superintendent Froilan N. Mendoza.

The spellers competed fiercely for seven rounds Feb. 18 at the Performing Arts Center of Baldwin Park, with students eliminated after missing a single word. School staff, family members and friends cheered on the students as they competed.

In the end, it came down to Jonathan and Holland Middle School sixth-grader Julian Estrella. The two went head to head for three rounds before Jonathan emerged victorious. The hardest words of the day: apparatus and the winning word, orthodox.

To prepare for the contest, Jonathan said he worked hard, practiced with classmates and accessed online spelling bee resources. He plans to study daily until the county contest.

Jonathan and Julian each received trophies and gift baskets containing school supplies and a gift card. All participants received T-shirts and certificates of participation from the District and from local officials. Master of Ceremonies was Assistant Superintendent Angela Salazar and the Spell Master was retired Sierra Vista High School Principal Jackie White. 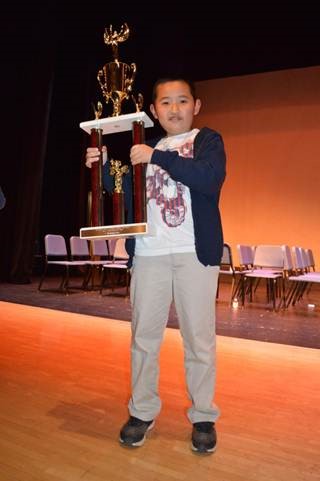