Called KIDS Talks, the speeches were given to an audience of administrators, teachers and 90 fifth-grade classmates. Each emphasized the benefits of project-based learning in science, technology, engineering and math (STEM), as well as lessons that incorporate art (STEAM).

The four-week lesson featured construction of air-propelled rockets, systems for cushioning dropped eggs, robots made from scrub brushes and models of animal and plant cells.

“Teachers should make a commitment to teach 21st century curriculum instead of the traditional way of teaching,” Yazmin Alvarado said during the opening talk.

Speaker Genesis Esparza asked audience members to practice a lesson in spelling before dismissing the idea as antiquated.

Andrea Salazar told classmates that a strength of STEAM lessons is a chance to create.

The students drew on examples such as Barbara Paulson, who helped calculate NASA rocket trajectories, and Sally Ride, America’s first female astronaut, as well as the African-America women portrayed in the movie, “Hidden Figures.”

Rangel, who developed the lesson plan, said he wanted his students to see STEAM through diverse perspectives. For example, many people don’t know that Guillermo Gonzalez Camarena pioneered color television when he was just 17, and introduced color television to Mexico.

Each of the four speakers represented a team of students who researched toy marketing at Target. Students learned that Target offers mostly pink toys to girls and darker-colored toys for boys, and that most STEAM toys are aimed at boys.

“Why can’t it be different? Why do the boys always have to get the orange and black colors and the girls only get pink?” Vanessa Carrillo asked.

“I think there should be more STEAM toys because I like scientific stuff, too, and I like building, too. That’s why I really liked these projects,” she said.

Rangel said his goal was to inspire a broader view of STEAM topics.

“The main goal was to encourage a shift to 21st century curriculum, but from a diverse perspective,” Rangel said. “It’s not just about teaching STEM. It’s about why are we doing stem and how are we studying and looking at STEM.”

Principal Leslie Peregrina thanked the students for their “powerful message” about STEAM.

“It’s about all of us,” Peregrina said. “You can do this, you’ve shown me. Continue the work. We are so proud of you.”

BPUSD_TALK_2: Walnut Elementary fifth-graders Andrea Salazar and Genesis Esparza examine a model of cell after giving KIDS Talks on Oct. 30 on the power of STEAM instruction.

BPUSD_TALK_5: Walnut Elementary fifth-grader Genesis Esparza explains how students would prefer to build projects instead of doing worksheets during a presentation on Oct. 30.

BPUSD_TALK_7: Walnut Elementary fifth-graders Yazmin Alvarado and Niklaus Delgado show a “bristle bot” robot and a cell model after speaking about the power of STEAM education on Oct. 30. 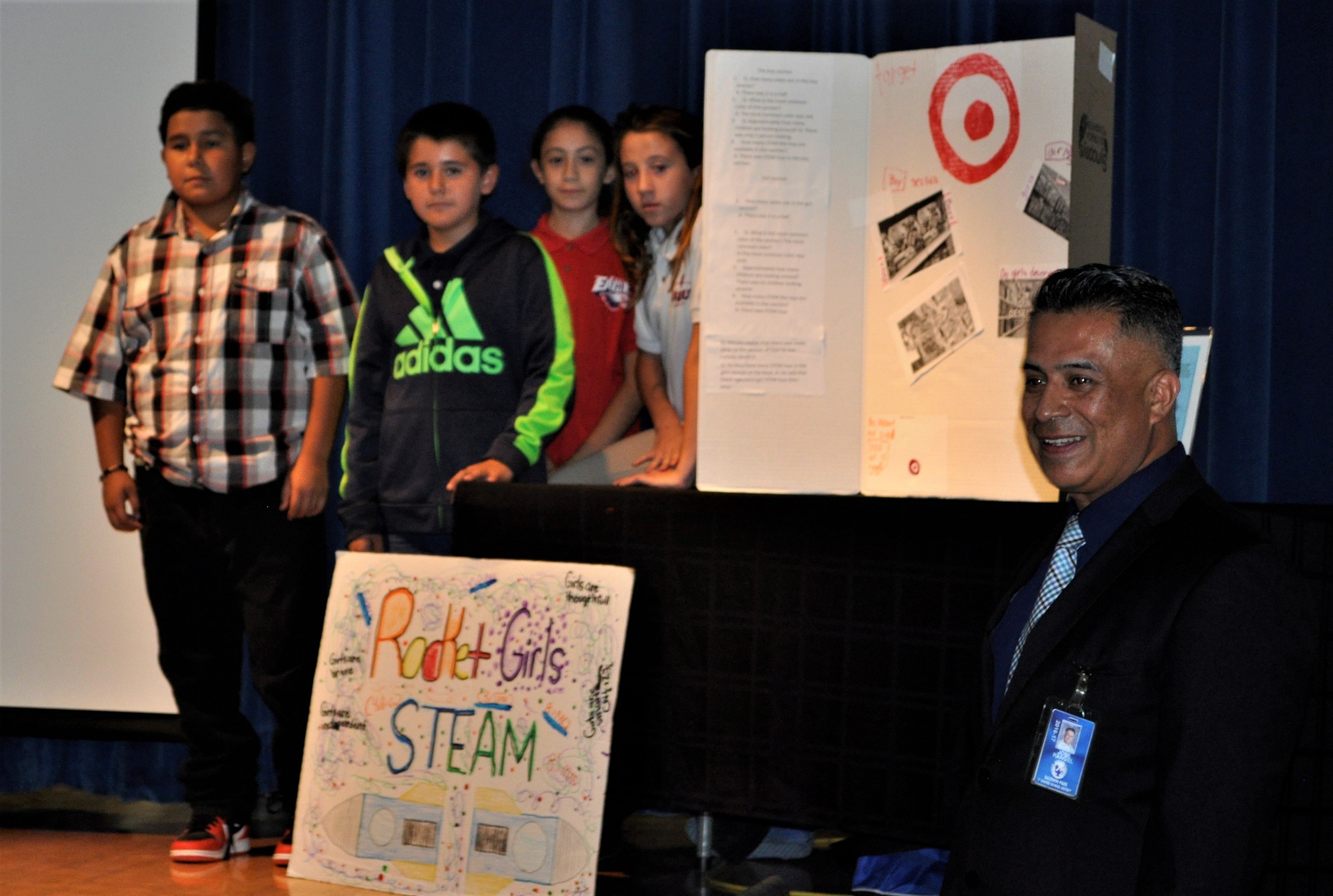 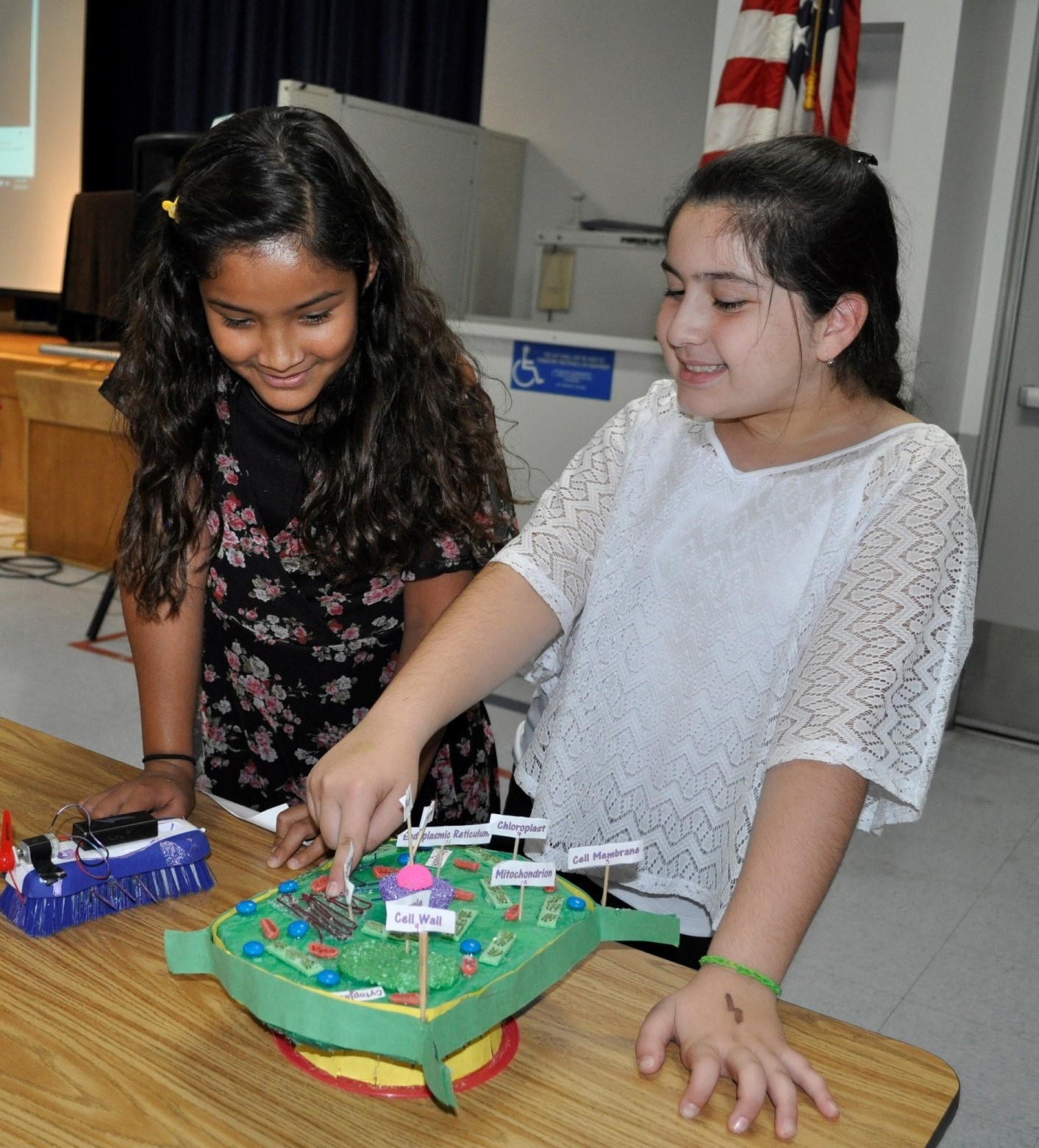 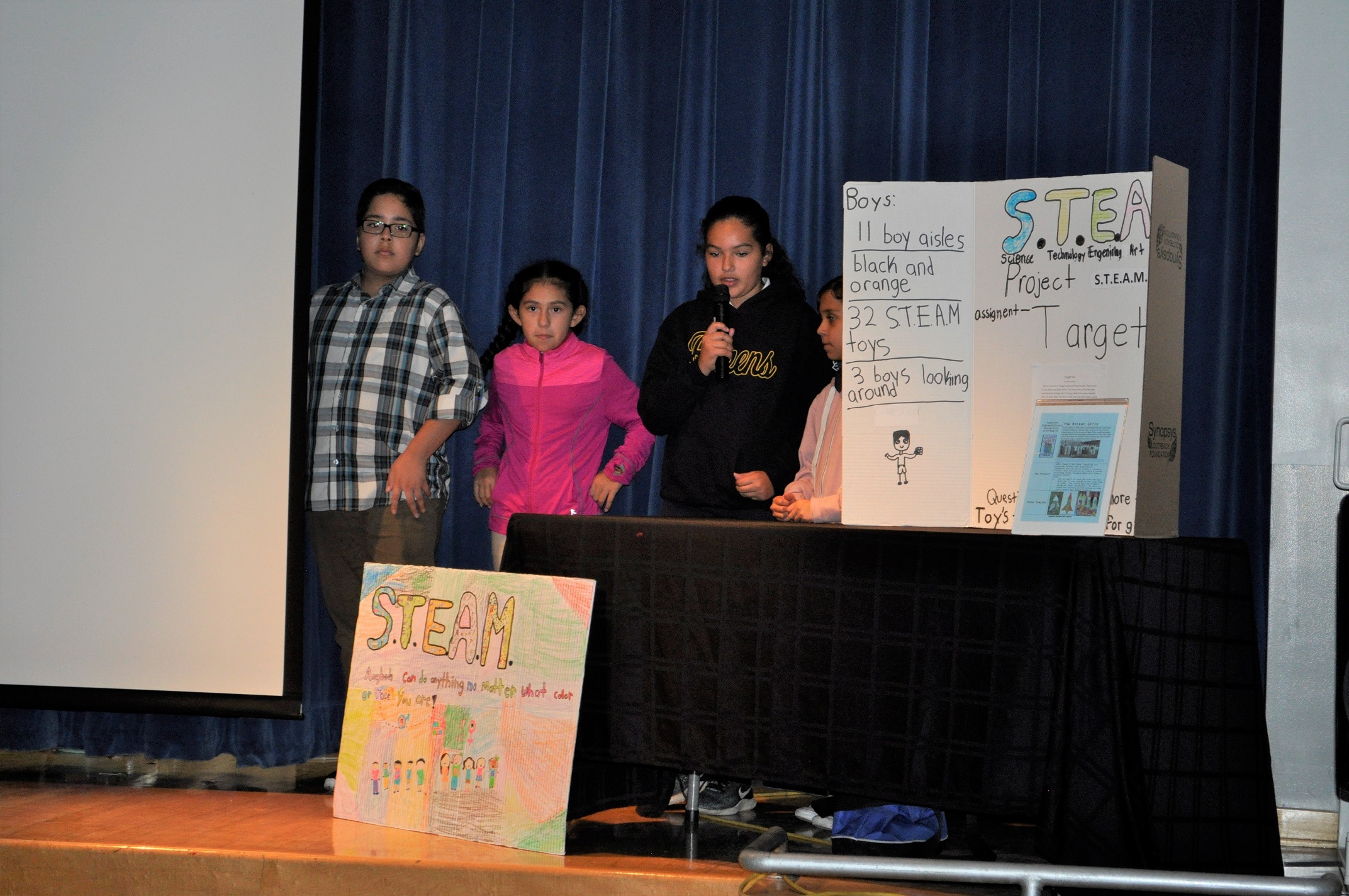 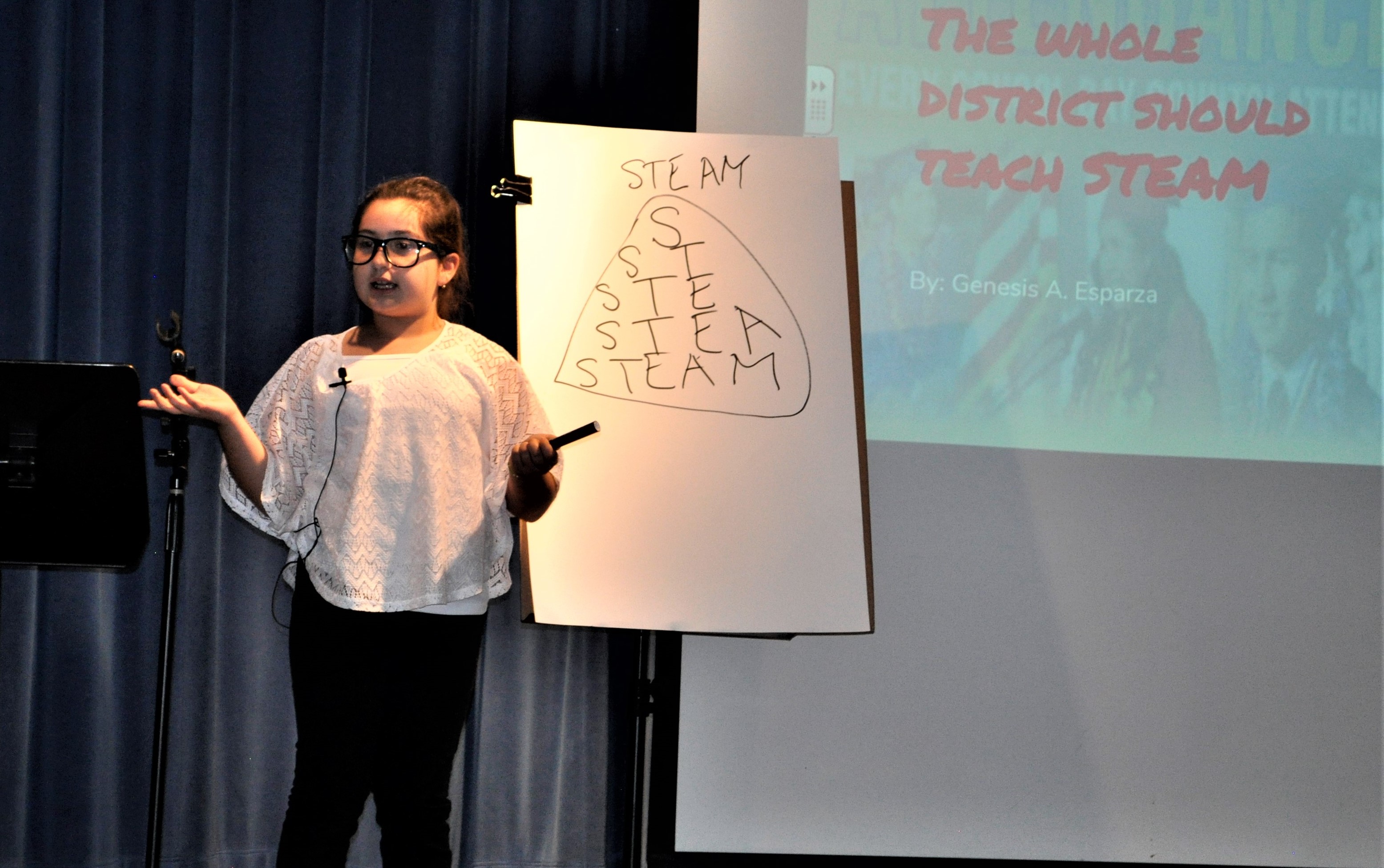 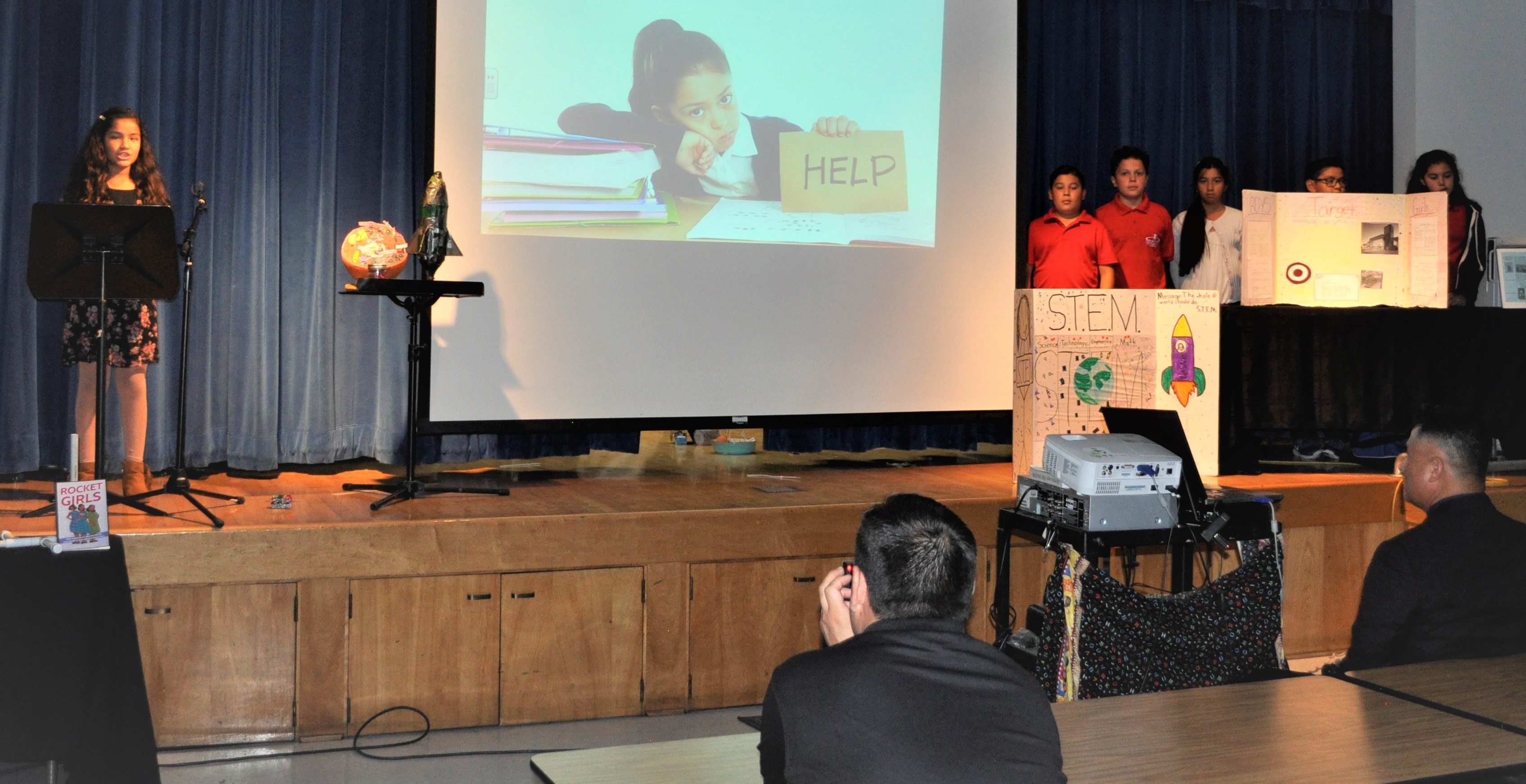 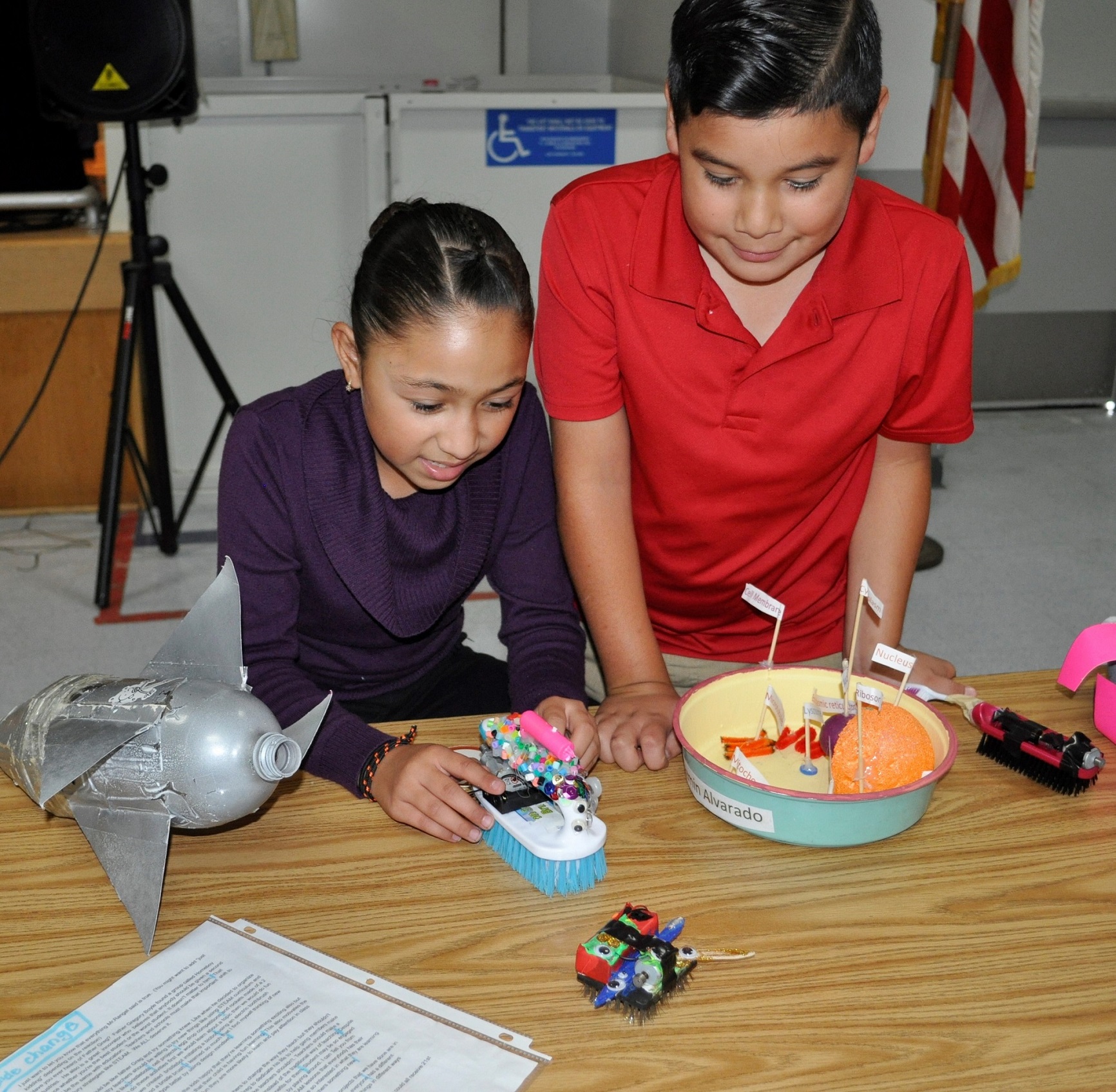