Gladstone High School Athletic Director Chuck Shore and student-athlete scholar Irma Ramos were also named recipients of the award. The Champion for Character honor goes to students, administrators, coaches and schools for contributions in promoting “Victory with Honor” and who embody the six Pillars of Character: trustworthiness, respect, sportsmanship, fairness, caring and citizenship.

“Azusa and Gladstone high schools set a high bar for the ideals of integrity and sportsmanship, and demonstrate unequivocally that athletics is just as much about fair play, dignity and grace as it is victory,” AUSD Superintendent Dr. Linda Kaminski said. “Congratulations to our high-achieving schools for being recognized for their outstanding leadership.”

Ramos, a junior, plays three sports – volleyball, basketball and track – and has been nominated for the award three years in a row by Shore.

“Irma’s character is flawless. She is so deserving of the award. In three years, no one has ever said anything negative about her,” said Shore, who expressed appreciation to his peers for his selection. “This is one of the most prestigious awards you can get. I am deeply honored and humbled at the same time.”

This is the third year that Azusa High has been acknowledged by the CIF-SS. Prior recipients include Azusa High student-athlete Destiny Tellez and principal Ramiro Rubalcaba in 2015, Azusa High cross-country coach Patricia Dorsey in 2014 and Gladstone High assistant principal Jacalyn Littrel in 2012.

“This is a tremendous honor to receive a Champions for Character award,” Azusa High athletic director Sandy Gahring said. “These awards are presented to only the most extremely dedicated and hard-working individuals, those who display the six pillars of character – trustworthiness, respect, responsibility, fairness, caring and citizenship. I am so proud of our school and so happy for my colleague Coach Shore and Irma Ramos.”

Recipients will receive banners to hang in their school gymnasiums. The Champions for Character awards are presented in honor of former CIF-SS commissioner Jim Staunton, who helped develop the criteria for the six pillars of character. A golf tournament is held every year to help fund scholarships for Champions for Character student-athletes. This year’s tournament will be held June 21 at Rio Hondo Golf Course in Downey.

“Our mission at Azusa Unified is to teach our children to be outstanding achievers,” AUSD Board President Yolanda Rodriguez-Pena said. “Thank you to the CIF for continuing to recognize the efforts of our students, coaches and administrators.” 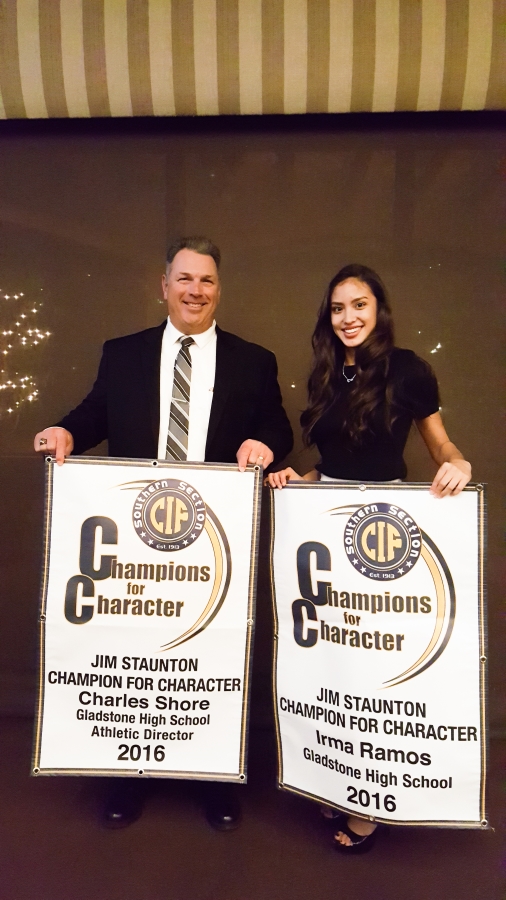