Rodríguez Moisa and Mendez were officially seated as Board members after taking the Oath of Office during a celebratory ceremony where they were joined by family, friends and community supporters. This is the first time in the Board’s more than 100-year history that they have seated an all Latino/a Board.

Rodríguez Moisa and Mendez replace outgoing Trustee members Leighton Anderson and Jeff Baird, who both retired after serving 25 years on the Board.

The Board reorganization meeting, which followed the ceremony, saw Trustee Jaime Lopez step into his new role as president. The Board also selected Dr. Ralph Pacheco to serve as vice president and Mendez to serve as clerk, with outgoing Board president Dr. Castañeda Calleros and Rodríguez Moisa rounding out the Board.

“The Whittier Union Board of Trustees is proud to welcome our new trustees, Irma Rodríguez Moisa and Gary Mendez,” Dr. Castañeda Calleros said. “Each new member brings a unique skill set that will complement the strengths and experiences of our current board members. Through collaboration and communication, I am hopeful our new trustees will exemplify our Whatever It Takes philosophy to achieve student success.”

Rodríguez Moisa is an attorney who specializes in labor and employment law representing public and private entities. She and her husband, Alex M. Moisa, have one daughter and two sons, all of whom attended Whittier Union schools. Cristina and Alex Moisa both graduated from La Serna High School and Isaac Moisa graduated from Whittier High School.

Rodríguez Moisa said her service as a Trustee is motivated by her belief in public education and that she is committed to making decisions that will positively impact students, staff and the community. Rodríguez Moisa is the first female Trustee member since 2003.

“I am incredibly honored to have been elected to serve on the Whittier Union Board of Trustees and look forward to the amazing and crucial work ahead,” Rodríguez Moisa said. “Whittier Union is known for excellence, and it is my goal to continue that tradition while ensuring all of our students, teachers, staff and families have access to programs and tools that will aid in their success. I am grateful to work alongside a group of true professionals who prioritize the success and achievement of this District.”

Mendez is a Class of 1987 graduate from Whittier High School, a school attended by five generations of Mendez’s family, and has served five consecutive terms on the Río Hondo College Board of Trustees.
While attending California State University, Sacramento, Mendez worked for the state legislature, beginning a long career in government working as a legislative analyst on the local, state and federal levels, including the U.S. House of Representatives.

Mendez is CEO of a local nonprofit dedicated to the safety and emotional health of youth. He is a certified karate sensei, with nearly 40 years of experience as a martial arts teacher. Mendez is also a certified naturalist and climate science steward.

“I am very appreciative that my election is the product of the California Voting Rights Act and I am grateful to the voters who have given me the opportunity to serve them – it is the highest honor,” Mendez said. “As a Board member, I am focused on equity, inclusion and the overall health of all our students. I am determined to continue the District’s culture of excellence, while looking at what we can do to provide additional resources and support to our students, ensuring all mental and academic barriers are eliminated.”

“The Whittier Union High School District prides itself on ensuring the academic success of students by providing them with the tools and resources they need to achieve their dreams,” Superintendent Dr. Monica Oviedo said. “We are proud to have a Board of Trustees that always puts the needs of our students at the forefront of their decision making and are thrilled to welcome back Trustee Dr. Castañeda Calleros and congratulate Mr. Gary Mendez and Ms. Irma Rodríguez Moisa on their victories. I look forward to working together and continue living up to our District motto, ‘To Achieve and Maintain Excellence.’”

WUHSD_BOARD1: During a Dec. 13 Board meeting, the Whittier Union High School District held an Oath of Office ceremony, which celebrated Dr. Russell Castañeda Calleros (left) for his re-election and welcomed Irma Rodríguez Moisa (middle) and Gary Mendez (right) to the Board. 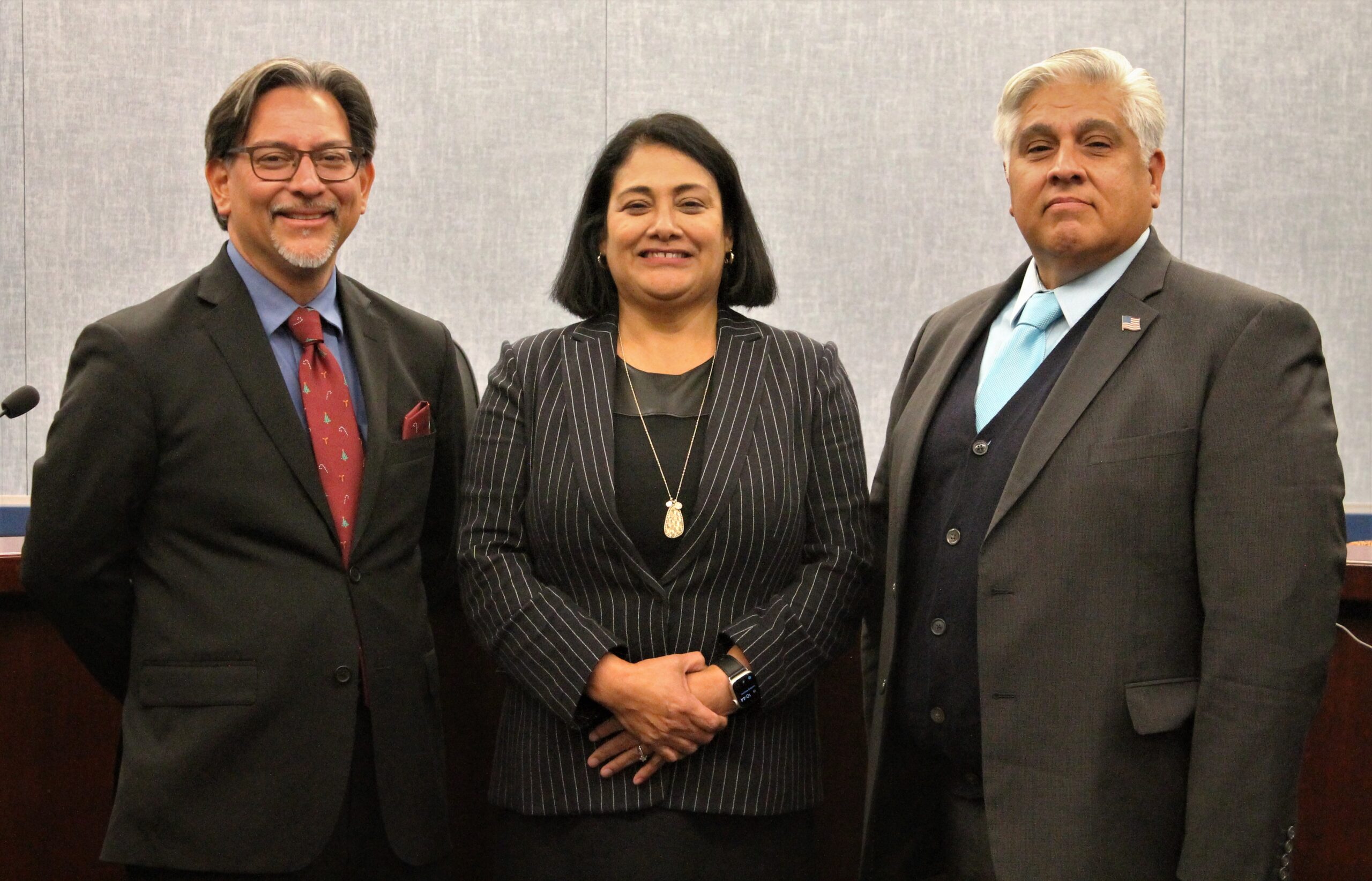 Whittier Union Welcomes New and Returning Board of Trustees Members