WHITTIER – La Serna High School senior Olivia Genao is a budding artist whose lifelong passion for art, science and math has fueled a remarkable educational journey that has earned her District-wide recognition for gaining early admission to Yale University.

Genao, La Serna’s 2019 Student of the Year, was granted early admission to the elite Ivy League campus in December. She is one of 794 applicants from around the world selected to join the Class of 2023 through the Early Action Program. Genao, who plans to major in neuroscience, was offered a full-tuition scholarship.

“Being accepted into Yale is something I never imagined possible,” Genao said. “I couldn’t have done it without my most important support system – my family.”

Surrounded by friends and family, the scholar was recognized by the Whittier Union Board of Trustees with an Award of Merit on Feb. 19.

“It is extremely difficult for me to summarize Olivia’s accomplishments and outstanding qualities, because of how highly I think of this young lady,” La Serna counselor Kelley Strong said. “Olivia is incredibly insightful, determined and has an enormous amount of potential.”

Genao, who has a 4.53 GPA, serves as editor-in-chief of La Serna’s award-winning yearbook and has taken 13 Advanced Placement classes – seemingly finding a way to combine her love for the arts, which began when she picked up a camera at 5 years old, with her passion for science and math.

“An artist is innovative, imaginative and inventive. So is a scientist,” Genao said. “It may seem odd that the qualities that serve me so well in science sprouted from the field that most obviously contrasts it, but for me it makes perfect sense.”

In 2017, Genao was one of 20 high school juniors selected to participate in a nine-month Women in STEM program at Harvey Mudd College. Later that year, Genao attended the UCLA Nanoscale Microscopy Lab Summer Institute and in 2018 completed a research project at Whittier College.

Genao has received numerous honors for her leadership experience, serving as president of La Serna’s National Honor Society and the Whittier chapter of the National Charity League. Genao has also been cited as a National Merit Commended Scholar and AP Scholar with Distinction.

Even with a full schedule of classes, Genao has given over 800 hours of volunteer service as a STEM mentor at La Habra Library and hospital ambassador at PIH Health.

“Oliva is a remarkable and extraordinary young woman, using innovation and imagination to excel in her studies while becoming a leader among her classmates and in her community,” La Serna Principal Ann Fitzgerald said. “I am excited to see what the future will bring for Olivia.”

022519_WUHSD_GENAO2: La Serna High School senior Olivia Genao, who gained early admission to Yale University, was honored with an Award of Merit by the Whittier Union Board of Trustees on Feb. 19. Genao is pictured with Principal Ann Fitzgerald, left, and her family. 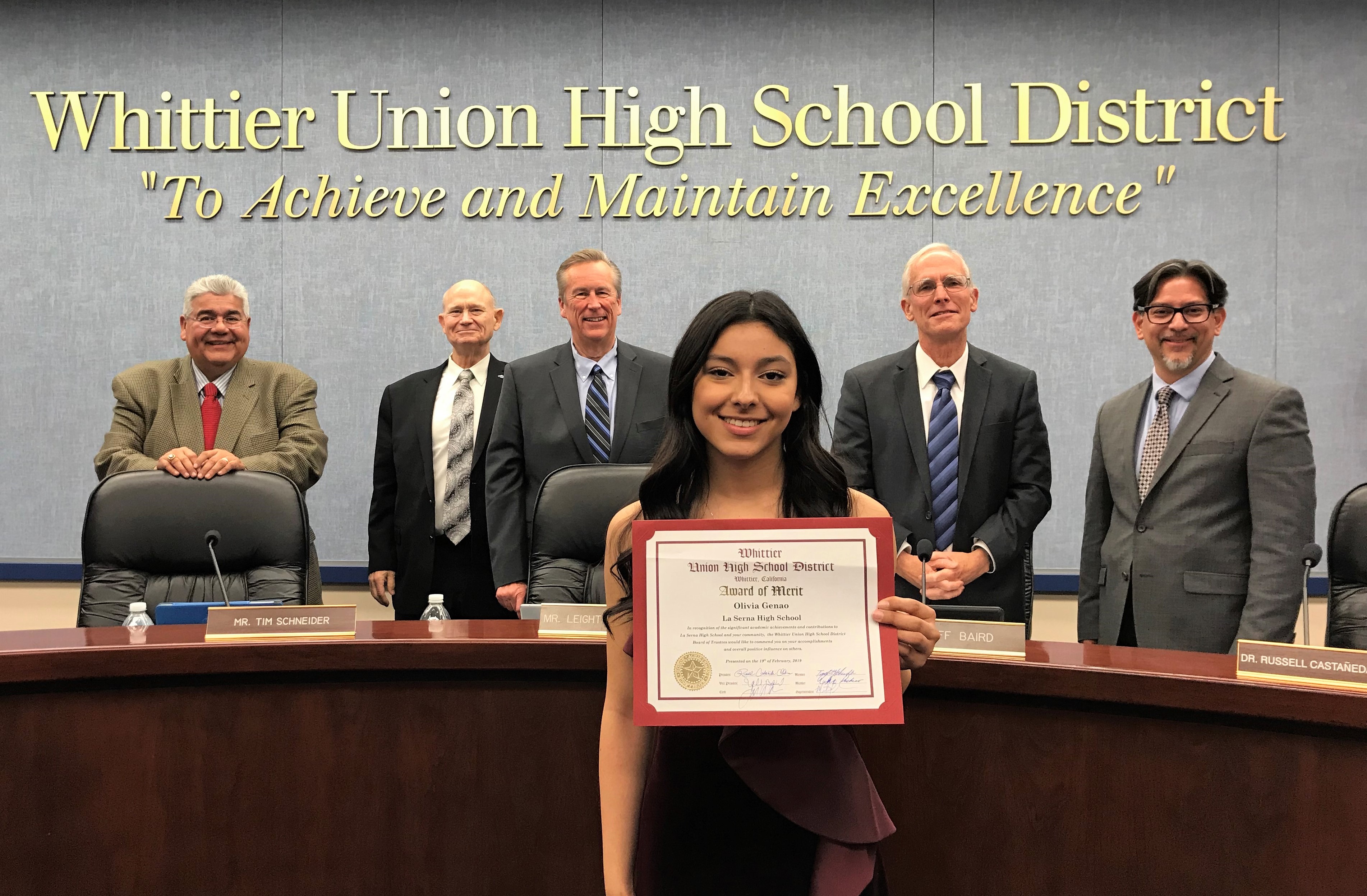 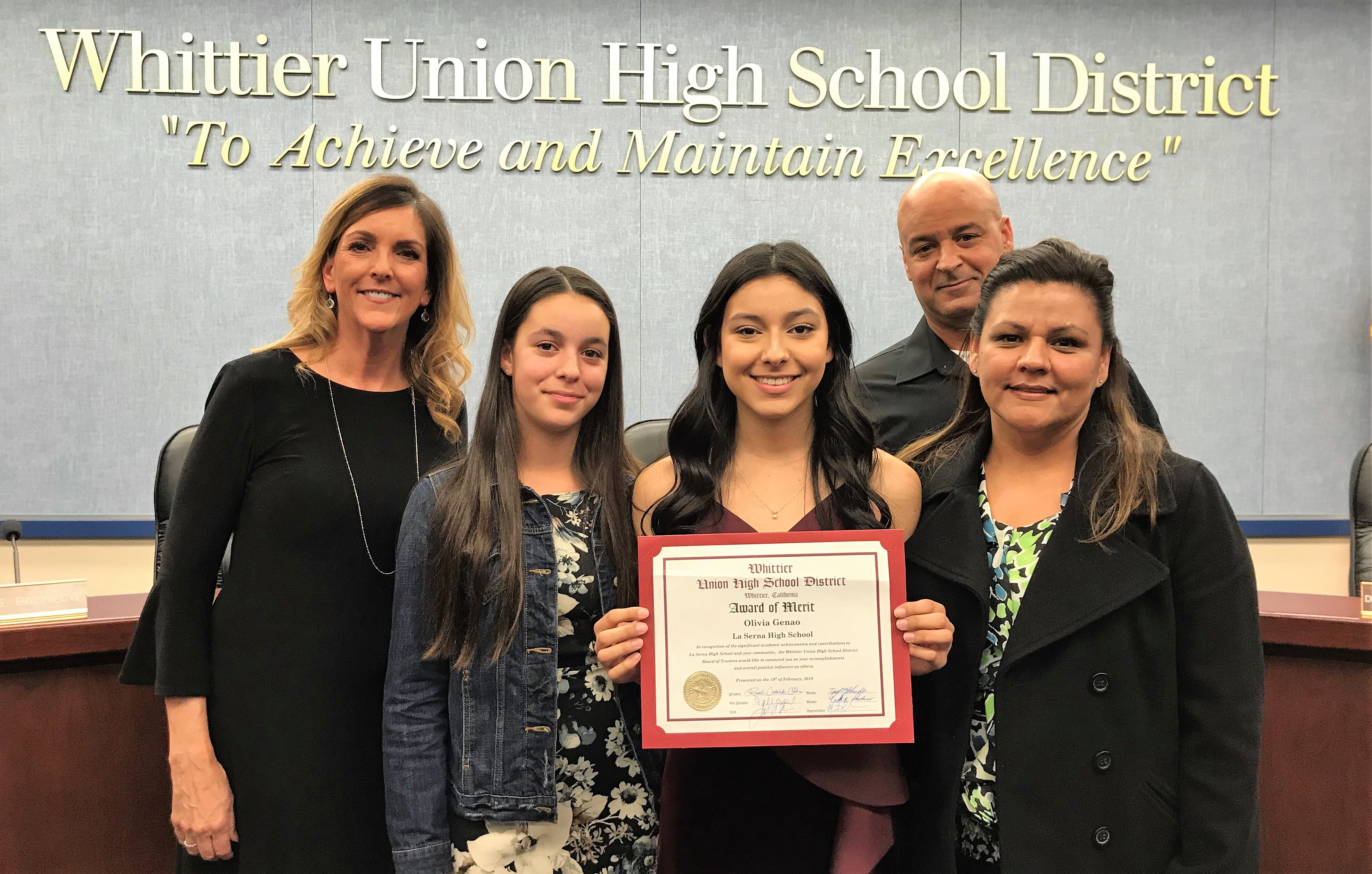