WHITTIER – When La Serna High School senior Diana Gonzalez immigrated to California from Mexico with her mother and brother as a fifth grader, she spoke no English. Determined, positive and resourceful, Gonzalez sought to learn a new language and a new culture.

Designated as an English Language Development (ELD) student, Gonzalez immediately began immersing herself in the language, taking home extra grammar work and listening to audio tapes in English. By the end of sixth grade, Gonzalez was reclassified and put in mainstream classes.

Entering La Serna, Gonzalez enrolled in the school’s four-year college prep Puente Program and joined the Expanded Horizons service club. Gonzalez’s language and leadership skills developed so rapidly that she now serves as a translator for students who are themselves newly arrived in the country, as well as serving as a peer mentor and role model for ELD students.

For her determination and leadership, Gonzalez was recently named La Serna’s Exemplary Student for the 2020-21 school year. She was recognized with an Award of Merit from the Whittier Union Board of Trustees during its March 9 board meeting.

“It is an honor to be recognized by La Serna as an exemplary student. I would like to thank all of the teachers who guided me on the path to English literacy and success, and my fellow students for believing in me,” Gonzalez said. “I would also like to thank my mother and brother, who have always been there for me and supported all of my academic and extracurricular activities.”

Gonzalez, who has a 3.98 GPA and dreams of a career as a radiologist, has taken numerous AP and Honors classes and been a member of the La Serna Honor Roll for four straight years. Gonzalez is fluent in three languages, English, Spanish and French and will graduate with a Gold Seal of Biliteracy. Gonzalez has been distinguished as a French Honor Society life member.

Gonzalez’s development through the Puente Program epitomizes her pursuit of academic achievement and leadership. Gonzalez has been a Puente cabinet member for four years, serving in various capacities, including AP representative, secretary and, currently, as vice president. Gonzalez has also been nominated for the Statewide Puente Academic and Leadership Award.

Gonzalez is a member of the La Serna tennis team and has performed with the La Serna Marching and Concert bands. She has volunteered more than 100 hours at Presbyterian Intercommunity Hospital and worked with the Future Teens of Medicine.

Though she misses her native Mexico, Gonzalez is proud to be an American citizen and part of the Latino population in the U.S. She plans to major in pre-medicine and has applied to many universities, including Stanford, Georgetown, University of Pennsylvania, UCLA, Cal Poly San Luis Obispo and San Diego State.

“Diana is a dedicated student, is goal oriented, kind, respected and admired by her peers and teachers, and appreciates every opportunity available to her,” La Serna Principal Griselda Castro said. “I have no doubt that she will continue to shine and be an asset to our community. We wish her the best of luck.”

031621_WUHSD_AWARDOFMERIT: La Serna High School Senior Diana Gonzalez shows off her Award of Merit, which she received from the Board of Trustees during its March 9 virtual meeting. 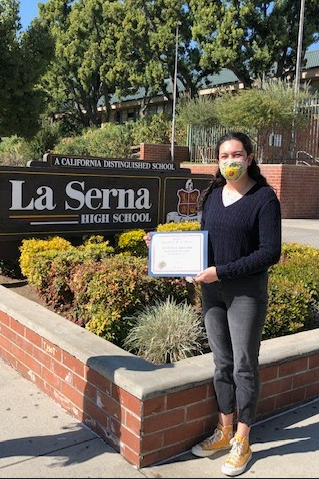