WHITTIER – When California High School girls swim team members Hanna LaBrada and Kai Izquierdo first entered the world of competitive swimming, the two prodigies often found themselves battling against each other. Today, LaBrada and Izquierdo are part of an extraordinary group of young swimmers who are leading Cal High’s swim program back to championship levels.

After a season of dominating their Del Rio League opponents, The Cal High Lady Condors won the CIF Southern Section Division IV girls swimming championship with a scintillating performance that saw the team scoring nearly double the points as the second-place finisher, Riverside North. The team was recognized by the Whittier Union Board of Trustees during its July 13 meeting.

“It seemed like Hanna and I were always in the finals together, but now we are teammates,” Izquierdo said. “It’s fun to look back at the videos when we were kids, not wanting to practice. It’s different now, and we look forward to training as a team. The CIF championship is amazing, but we look forward to moving up to Division III and showing them, we are ready to compete.”

The championship caps a stunning turnaround for the swim team, which finished last in league play just two years ago. Cal High’s fortunes turned for the better after hiring veteran coach Todd Jacobsen in 2020. As head coach for the Whittier Aquatics Club since 2014, Jacobsen has been instrumental in the progress of Cal High’s young swimmers, including LaBrada and Izquierdo.

“This is a very special group of swimmers, and I could not be prouder of them,” said Jacobsen, a former All-American swimmer for UC San Diego. “Having trained many of our freshmen swimmers, we knew what they were capable of, but we didn’t know how much they would improve over the course of the year. They really proved themselves in competition this year.”

LaBrada, who has trained at the aquatics club since she was 8 years old, credits Jacobsen for keeping her focused in the water and easing the transition to the demanding schedules of high school competition.

“I was nervous at my first meet at Cal, but once we got in the water, it was the same as swimming at the club,” LaBrada said. “Coach Jacobsen knows how I work and how to keep me motivated to push myself. He has helped develop me as an individual and as a team player. This has been the most fun year ever. I can’t wait to see what the next year brings.”

The Cal High Condors boys swim team came close to matching their counterparts in the pool, just missing a swim title of their own after taking second place in the CIF Southern Section Division IV championship, being edged out by Carpinteria High School.

“I am so impressed by the performances turned in this year by both our girls and boys swim teams,” Cal High Principal Bill Schloss said. “They were able to stay focused and keep working hard in those months when we had no idea if we would even have a season. Congratulations to Todd Jacobsen for his diligence and dedication to the swim program.”

WUHSD_CALHIGH_SWIM1: California High School girls swim team members were recognized for their achievements and presented with certificates of recognition from the Whittier Union Board of Trustees during its July 13 board meeting. 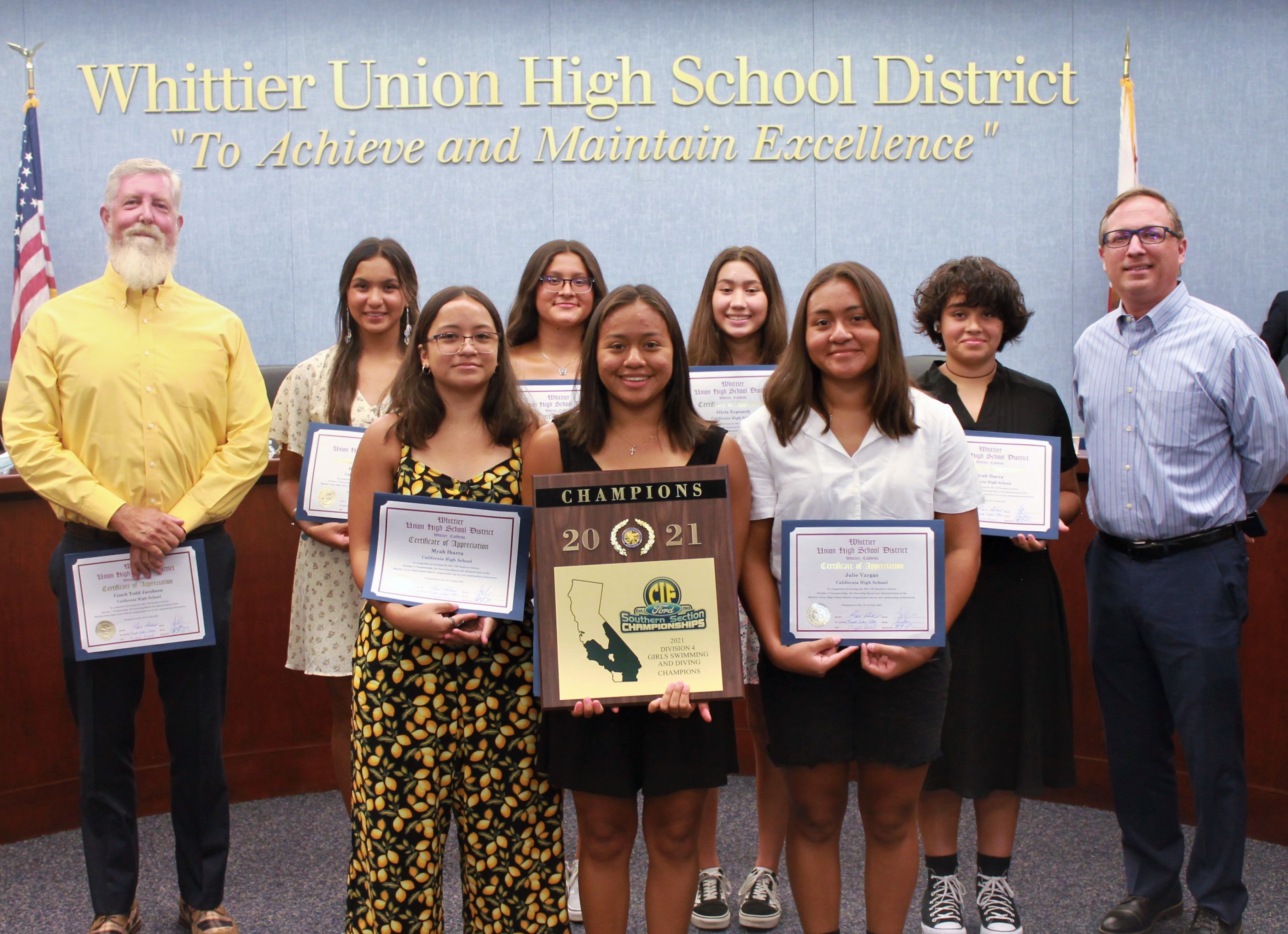