WHITTIER – At only 18 years old, Whittier High School senior and math enthusiast Joaquin Perkins is a retired National Chess Master, a title he received in 2018 after years of hard work and multiple national champion titles – the first of which he earned at age six.

Perkins began playing chess at an early age; his father Kele, a Whittier High School social studies teacher, shared his passion for the game. At the age of one, Perkins knew how to move all the pieces around the chess board. Perkins participated in his first tournament at the age of three and at six years old, he was ranked the No. 1 player in the nation among those his age. Later in his chess career, Perkins made the U.S. National Chess Team and at the age of eight, he won a gold medal in the North American Youth Chess Championship in Mexico City. Despite his retirement from the game, he is still ranked No. 24 nationally among other 18-year-olds.

His notable accolades extend beyond the world of chess. Perkins is also a high-achieving scholar with a 4.3 GPA and will graduate with a total of 389 credits – far exceeding the required 220 credits. For his academic excellence, passion and determination, Perkins received an Award of Merit from the Whittier Union Board of Trustees during an April 12 meeting.

“Thank you to the Board of Trustees for the award and for being here to present me with this honor,” Perkins said. “Thank you to the Whittier High School administration team and teachers for nominating me, and to my tutors and my former babysitter – the impact you have had in my life is very significant. Most prominently of course, thank you to my parents for taking care of me and my sister, providing us with a good education and for sharpening our minds.”

Perkins retired from chess as his interest in math began to expand, noting that he became more interested in pure mathematics and less interested in applied mathematics. Before coming to Whittier High School, Perkins had already started taking college-level math classes as a middle school student. He started classes at Citrus College and since has taken courses at Río Hondo College, Mt. San Antonio College and Whittier College.

Upon graduation, Perkins will near the completion of a math major having finished and excelled in courses such as calculus 1, 2 and 3, differential equations, linear algebra, advanced geometry, point set topology, numerical analysis, complex variables and number theory.

During his time at Whittier High, Perkins has challenged himself academically, taking several Advanced Placement (AP) classes – including AP Physics 1 and 2, Calculus AB and Statistics. He has taken and passed 15 AP exams and serves as an academic mentor for students in AP Calculus this year.

“Whittier High School has given me the opportunity to challenge myself,” Perkins said. “It gave me the chance to take any classes that I had proven qualified for, which greatly expanded the range of classes I could take.”

In the fall, Perkins will matriculate to the Massachusetts Institute of Technology (MIT), where he will continue his remarkable academic journey as he majors in mathematics with an emphasis in number theory. Perkins shared that his ultimate goal at MIT is to expand his knowledge and love for mathematics and later pursue a career in mathematical research.

“Joaquin is not only an outstanding student, but he is also an outstanding person,” Whittier High School Principal Tim Liggett said. “While he is clearly aware of his gifts, he always maintains an appropriate degree of humility with a nice mix of humor. Joaquin is a true Cardinal with CLASS and has achieved success in and out of the classroom. We are so proud of him and cannot wait to hear more about his future successes as he takes his talents, skills and passion to MIT this fall.”

WUHSD_PERKINS1: Whittier High School senior and math enthusiast Joaquin Perkins was recognized with an Award of Merit by the Whittier Union Board of Trustees during a meeting on April 12. 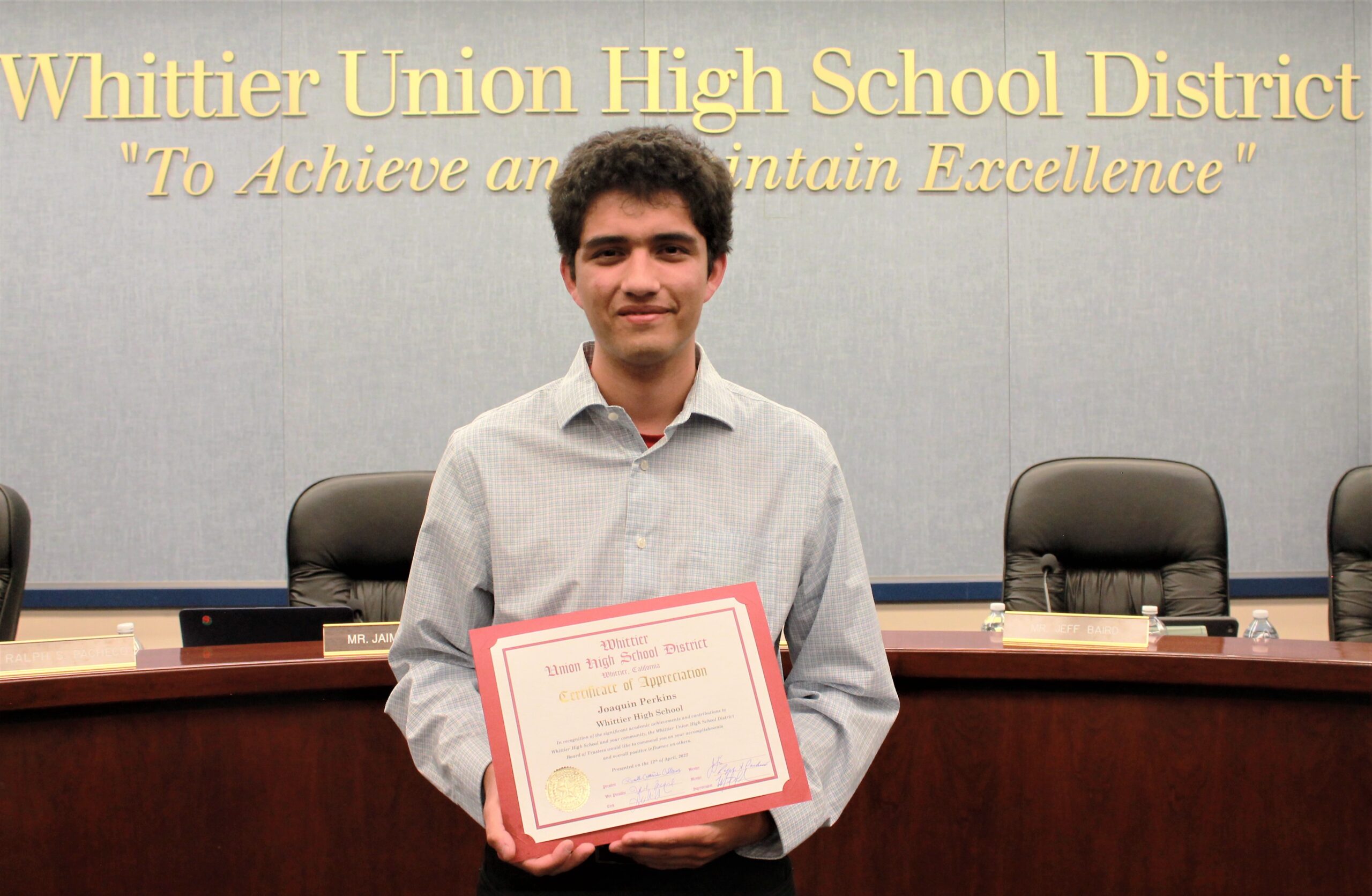