WHITTIER – California High School senior Avigahy Garcia moved from California to Mexico and back during her childhood, challenging her to learn and re-learn different languages and cultures over the course of several years.

For triumphing against the odds, Garcia was recognized with an Award of Merit by the Whittier Union Board of Trustees on Sept. 11.

“We talk often at Cal High about the fact that every one of our kids has a story – many times filled with tremendous challenges,” Cal High Principal Bill Schloss said. “More often than not, our kids work really hard and rise above their challenges to do great things. Avigahy Garcia is a great example of just that.”

At the start of fifth grade, Garcia moved to Mexico with her parents and twin brother, while her two older siblings remained at Cal High. Garcia, who spoke only English, struggled to keep up with her studies in Mexico, painstakingly learning to speak, write and learn Spanish.

Garcia dreamed of the day she could return home and attend Cal High. The opportunity came at the beginning of sophomore year, when she and her brother returned to Whittier, moving in with an uncle and resuming their schooling in Whittier. Her parents stayed in Mexico, understanding that it was necessary for the twins to re-establish themselves as college-bound students.

The first year at Cal High was the toughest, as Garcia had to re-learn English, readjust to high school life and make new friends. Despite being separated from her parents, Garcia worked arduously to excel in her studies with the help of the Cal High’s student support program, Expanded Horizons.

Since her parents returned to California in 2017, Garcia has soared. Designated as an English Language Learner student, Garcia was reclassified as fluent English last year and serves as an Academic Mentor for English language arts students who may be struggling.

“I just want to say that Cal High is a great school. I would like to thank everyone, especially my English language teachers. Without them I wouldn’t be on the right track,” Avigahy said. “I would also like to thank my family, who always supported me and who were always there for me emotionally and spiritually. They will forever be the reason for my success.”

Garcia is applying to UC Irvine and several Cal State universities. She wants to study business and pursue a career as an accountant.

“Avigahy was embraced by the Cal High community and supported at every step along the way,” Schloss said. “Avigahy has tremendous drive and a desire to go places. Cal High helped her develop the skills necessary to be successful at the next level. We are so very proud of her and know that she will be another great American success story.”

092618_WUHSD_AVIGARCIA1: California High School senior Avigahy Garcia was honored with an Award of Merit by the Whittier Union Board of Trustees on Sept. 11 for overcoming challenges in her language development to become a straight-A student on the road to college. Pictured are Garcia along with the Board of Trustees, Tim Schneider, Leighton Anderson, Jeff Baird, Vice President Dr. Russell Castañeda-Calleros and President Dr. Ralph Pacheco.

092618_WUHSD_AVIGARCIA2: California High School senior Avigahy Garcia was honored with an Award of Merit by the Whittier Union Board of Trustees on Sept. 11 for overcoming language barriers and achieving success. She is pictured with Principal Bill Schloss. 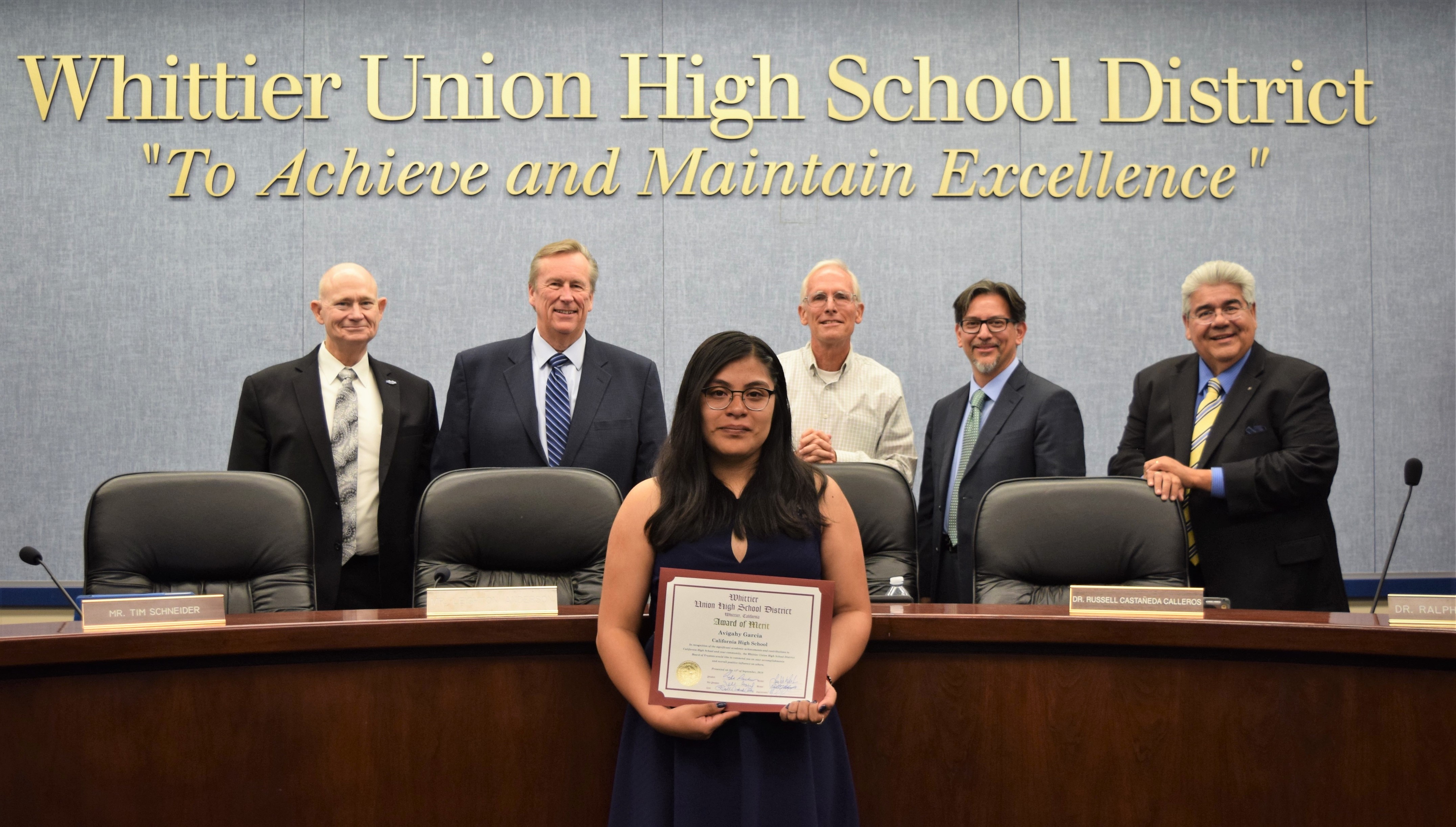 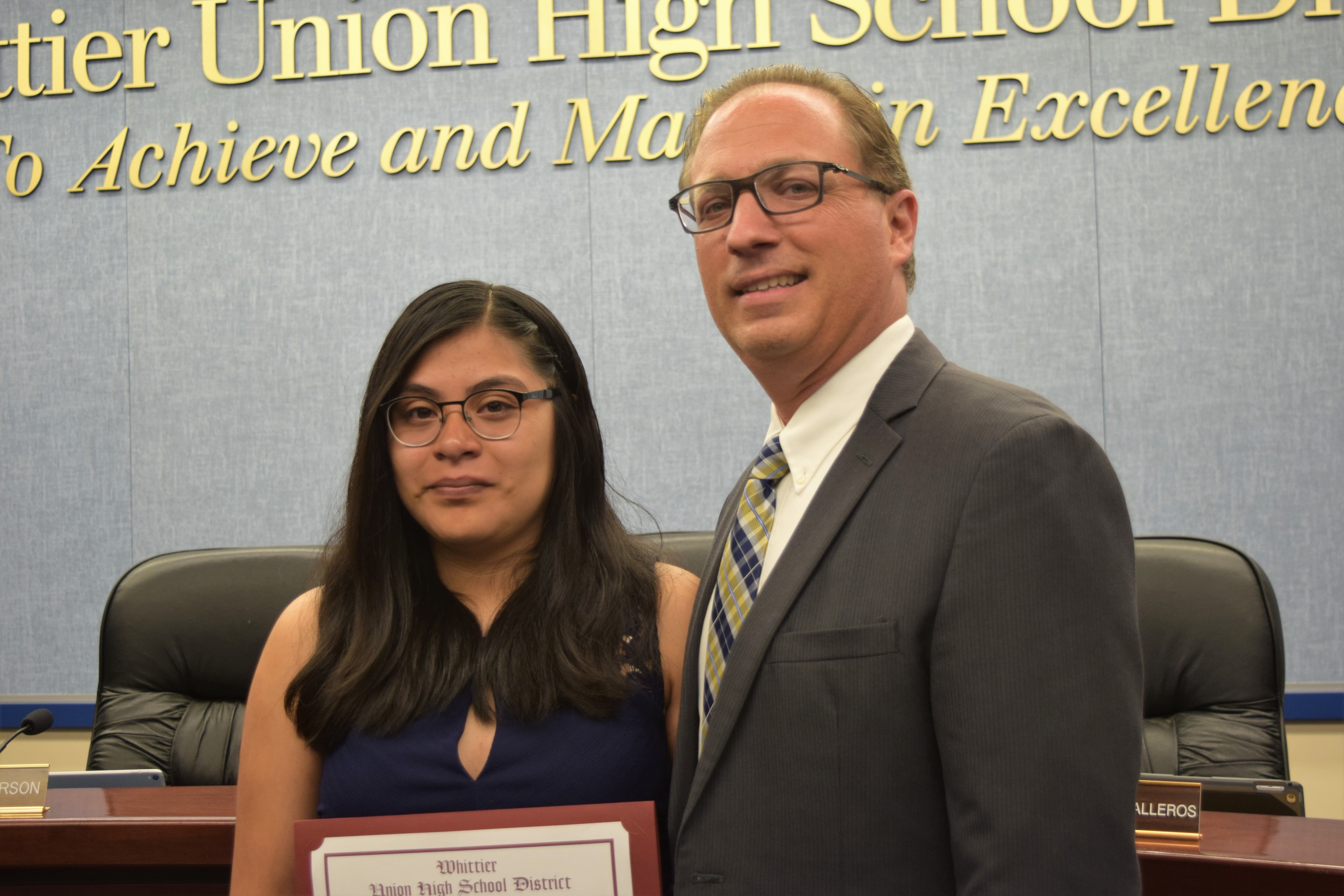