WHITTIER – The Whittier Union High School District Board of Trustees celebrated the careers of two of its longest-serving members during the Nov. 8 Board meeting, saying farewell to Vice President Jeff Baird and Clerk Leighton Anderson, who are both retiring from the Board after serving together for 25 years.

Baird and Anderson were first elected to the Board in 1997 and have each served five terms. During that time, they have worked alongside four superintendents, have shepherded through three separate facilities bond measures, and seen thousands of Whittier Union students graduate and receive their diplomas.

“Congratulations to our retiring Board members, Mr. Baird and Mr. Anderson, who have served our community with integrity, compassion and the highest level of professionalism while always remaining student-centered,” Superintendent Dr. Monica Oviedo said. “Whittier Union is blessed to have a Board of Trustees that is truly invested in the health and welfare of its students and families, and eager to work with administration, faculty and staff to ensure that we have all of the tools necessary to provide our children with an education that puts them on the path to college and career.”

Baird had already served a term on the South Whittier School District Board of Trustees when he first ran for a seat in Whittier Union. Anderson felt compelled to run after attending several Board meetings as a parent.

“I’ve enjoyed working with Jeff over the years,” Anderson said. “We are very dissimilar. I’m a talker while Jeff is reserved. But everyone on the Board knows that when Jeff has something to say, you have to listen. He has always been focused on what matters. It’s always been a delight to work with Jeff.”

Baird has cherished his years on the Board, which have given him the opportunity to work with, and be mentored by, a succession of highly regarded superintendents. He said he is most proud of seeing so many students from his Trustee district – which includes Cal High – graduate and become first-generation college goers. His wife, Jan Baird, is still a member of the South Whittier Board of Trustees.

“It’s been a lot of fun. There is a tradition of excellence at Whittier Union and I am proud to have played a small part in our 122-year history of providing excellent high school education services,” Baird said. “One of the most outstanding characteristics of the District has been the hiring and training of our faculties. There has also been a tradition of mentoring our staff at all levels. I thank the Whittier community for giving me the opportunity to serve.”

Anderson said he is most proud of restoring District facilities into state-of-the-art campuses through a series of bond measures passed by Whittier voters over the years. Anderson supported District administrators in securing millions of dollars in Federal Emergency Management Agency (FEMA) funding for District schools, which remained in disrepair after the 1987 Whittier earthquake, by meeting with congressional and FEMA staff during a personal visit to Washington D.C.

Among Anderson’s favorite memories are the years he spent as the La Serna High home game football announcer, attending band competitions and other school events and handing out diplomas at commencement ceremonies.

“It has been an absolute pleasure,” Anderson said. “I consider Whittier Union to be the premier education agency in Los Angeles County. The District is continually being recognized for its outstanding work. I am proud that I have been able to contribute to laying the foundation for a culture of excellence. I’ve enjoyed every minute.”

WUHSD_BOARD1: Board Clerk Leighton Anderson and Vice President Jeff Baird celebrate with one another as they complete their final meeting as part of the Whittier Union Board of Trustees on Nov. 8. Both members are retiring after serving together for 25 years. 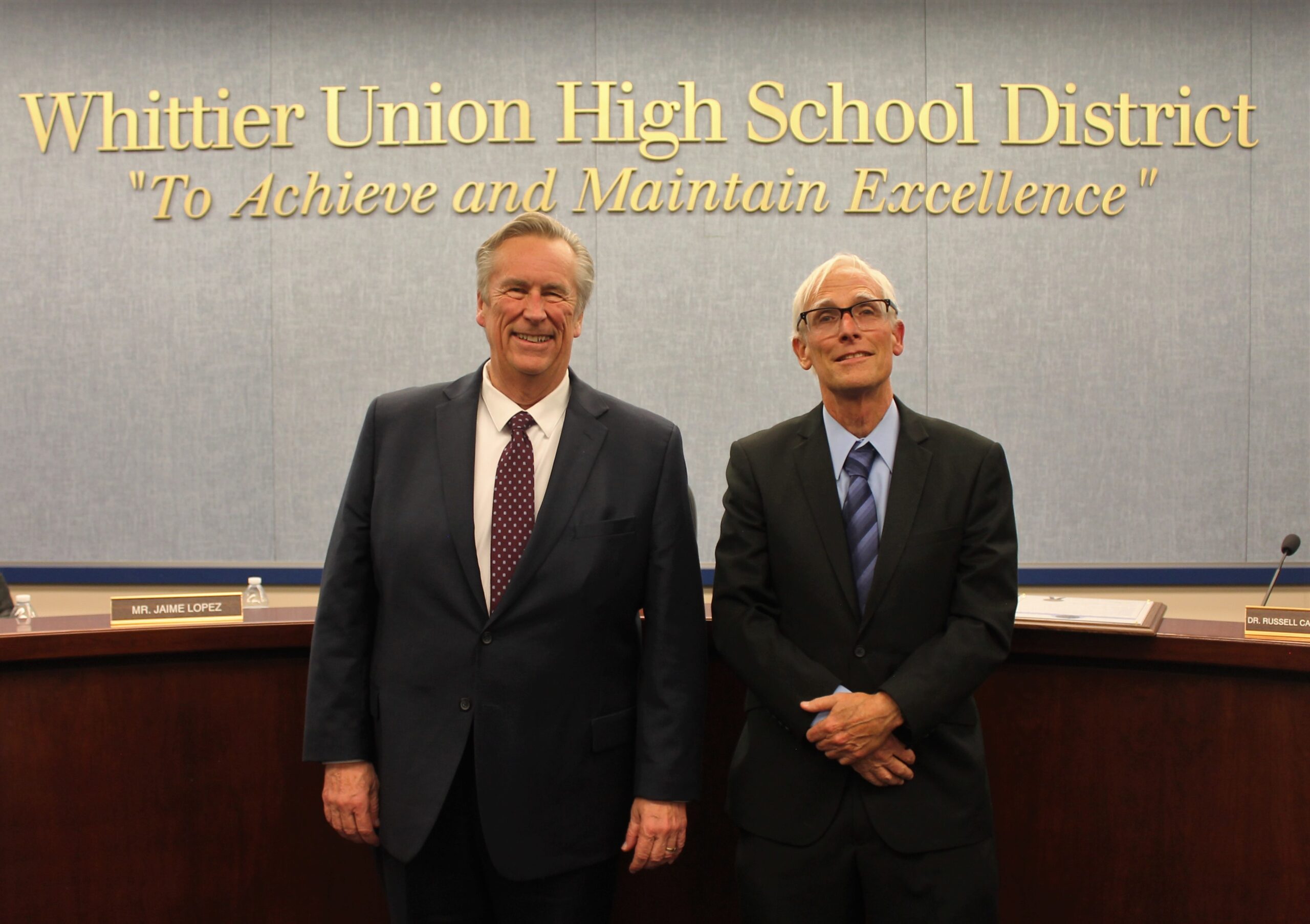