The Schools to Watch list, created by the National Forum to Accelerate Middle-Grades Reform, identifies schools across the U.S. that share three features: academic excellence, developmentally responsive to early adolescence and social equity.

“I’m incredibly proud of our extraordinary students, staff and teachers for everything they do to create a positive, collaborative and high-caliber learning environment,” Wayne Ruble Principal Caroline Labonte said.

Wayne Ruble Middle School boosted student GPAs over the last two years and improved state standardized test scores over the last four years. Labonte credits the achievements to the school’s efforts to increase support for both the academic and socio-emotional needs of students.

Bassett noted that California boasts more than 1,000 school districts with middle schools, of which just 16 schools were newly designated Schools to Watch in 2019. He praised school and District leaders and Wayne Ruble students.

“We recognize that the task is not just to prepare students for the curriculum, but to prepare them for the world of tomorrow,” Bassett said. “That’s one of things we see happening at Wayne Ruble.”

“On behalf of all the students, I’d like to extend my thanks to our campus staff, teachers and administrators for keeping students at the center of everything that happens at Ruble. Without you, we couldn’t achieve all that we have,” Odette said. “Go Wildcats!”

During the event, he described the strenuous selection process for choosing Schools to Watch, adding that a team visiting the school realized the school’s strength after meeting with students.

“The students turned the day,” he said. “Congratulations.”

The school was named in 2000 for Dr. Wayne Ruble, who joined Fontana Unified as a special education teacher in 1958. After 27 years of teaching and service as a district coordinator for special education, he retired – only to join the school board. He served for 21 years, retiring in 2006.

“I think it’s so fantastic to have a school in Fontana to be recognized,” Ruble said. “I’m glad to be here.”

Serna not only serves on Fontana Unified’s school board but also works for the San Bernardino County Superintendent of Schools and is a Wayne Ruble parent – his 13-year-old son, Issak, performed in the band during the ceremony. He said the Schools to Watch designation reflects a community-wide effort, including students, teachers, staff and community partners.

“It has to be a united front,” Serna said. “I just spoke to another parent who said she also loves this school because everyone works as a team, and that’s what it takes.”

FUSD_RUBLE_STW: Leaders from Fontana Unified and Wayne Ruble Middle School, in addition to students and a representative of the National Forum to Accelerate Middle-Grades Reform, celebrate the school’s selection for the 2019 Schools to Watch list on April 12. Joining them, center, is school namesake Dr. Wayne Ruble. 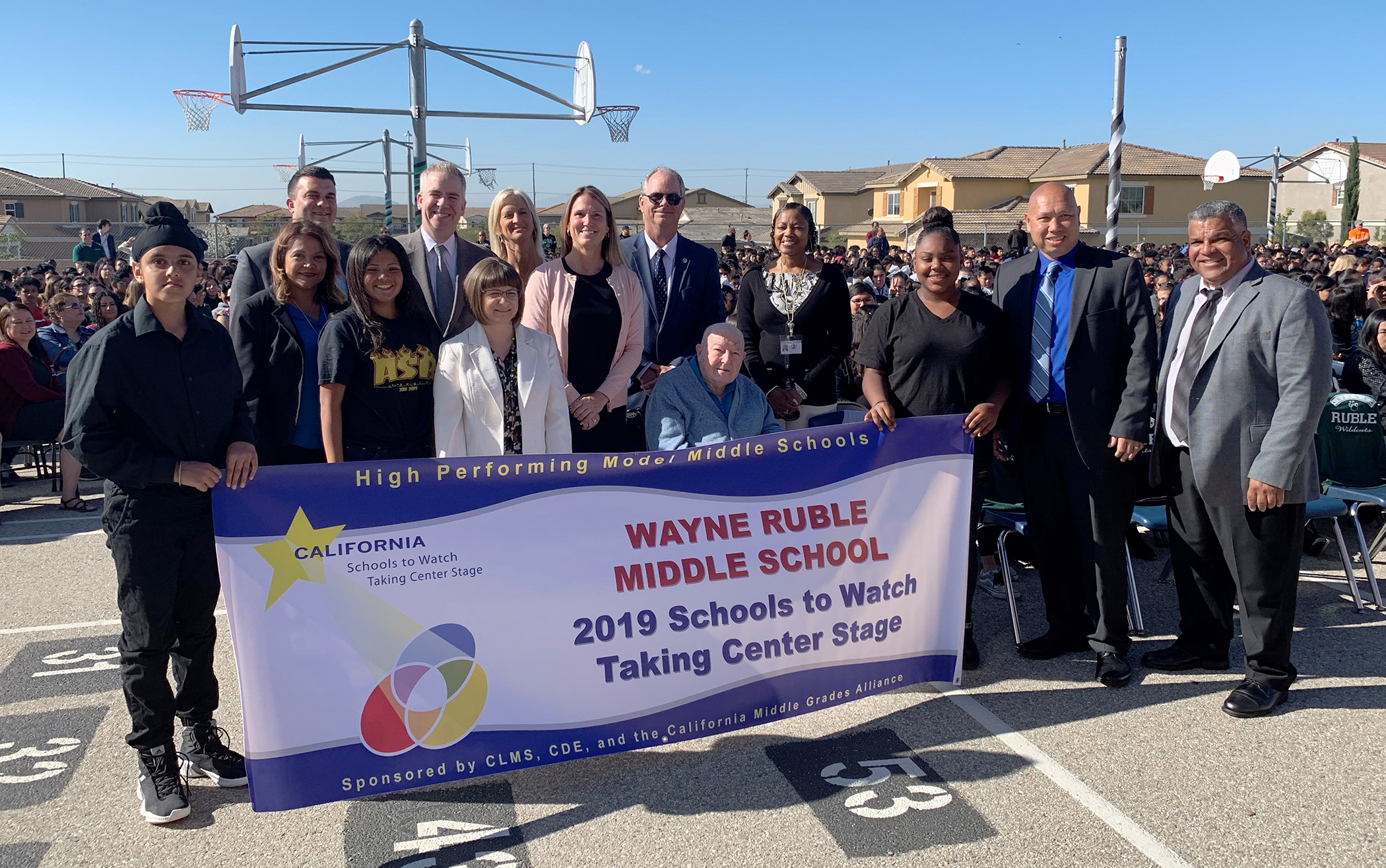