The musical, which premiers on Thursday, Aug. 4 in the College’s Wray Theater, marks the return of in-person musicals for Río Hondo College since the start of the COVID-19 pandemic. Previous theater performances were held via Zoom.

Professor of Theater Arts William Korf, who is also directing the play, said he and his team of actors and crew members are glad to be back on stage but are keeping high safety standards. Korf said selecting “The 25th Annual Putnam County Spelling Bee” was purposefully done to allow actors to spread out on stage while still showcasing their talents.

Fourth year Río Hondo College student Anissa Garcia said she’s excited and daunted about playing Logainne “Schwarzy” because this is the first time she’s ever starred in a musical.

“I hope the audience laughs, at least a little,” Garcia said. “This musical is rich in humor, of all kinds, but it is also very real. What I mean by that is, all the characters and the skeletons of their stories are common in today’s society. So, I think it’ll be easy for the audience to relate and become attached, I just hope they have thick skin and a sense humor too.”

Second year Río Hondo College student Indiana Leon, who will be playing Vice Principal Douglas Panch, said he believes the musical will be a hit because of the production’s comedy and heart.

“I am so pleased to start my tenure at Río Hondo College as our Theater Department prepares for such an amazing musical,” Superintendent/President Dr. Marilyn Flores said. “I’m looking forward to seeing our wonderful students as they showcase their talent – I know this production is going to be spectacular for the community.”

“The 25th Annual Putnam County Spelling Bee” will have evening showings at the Wray Theater at 8 p.m. Aug. 4, 5 and 6 and one afternoon showing at 2 p.m. Aug. 7. All showings are free to the public on a first come, first served basis. For more information, call (562) 908-3492 or email wkorf@riohondo.edu. 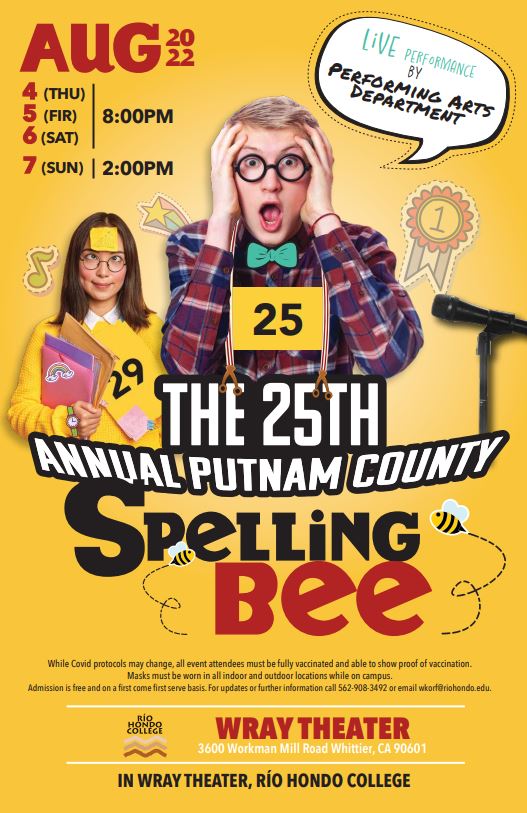