WHITTIER – Rio Hondo College celebrated 1,828 graduates during its 56th annual Commencement ceremony on May 23, including 16 students who received the College’s first-ever Bachelor of Science degrees.

“Today, we also celebrate our first-ever Bachelor of Science graduates in automotive technology,” she said. “This marks a historic accomplishment in California’s community college system, as we are one of only 15 community colleges in the entire state that offer four-year degrees.”

Dreyfuss, who was presiding over her final graduation before retiring June 30, also recognized the 2019 recipient of the Distinguished Faculty Award, Professor John Frala. Frala has led efforts in the automotive technology major and helped the College secure a landmark partnership with Tesla to train auto technicians.

This spring, the third cohort of students graduated, all finding immediate employment with Tesla.

The event featured a keynote by Rio Hondo College alumnus Dr. Luis S. Garcia, who advocates for marginalized communities as the director of programs and services at the Weingart Center in Downtown Los Angeles.

Garcia, who struggled in high school and earned his diploma while incarcerated, urged students to be lifelong learners who contribute to their community, focus on the positive and “walk into your loveliness.”

“As you leave here this evening ready to turn all your hard work and your dreams into reality, I hope you never lose the will to learn,” he said. “Hold on to your imagination. You reached one goal here this evening when you earned your degree or certificate but remember this is an intermediate goal that has prepared you to take another step forward – whatever that may be.”

Board of Trustees President Gary Mendez told the graduates that he and the other College leaders understand what it took for them to succeed.

“Over 30 years ago, I sat where you are today. I attended Rio Hondo and, like it was for you, it wasn’t easy,” Mendez said. “I was a homeless student at times while attending Rio Hondo. I slept in garages, on top of garages and here in the hills of Rio Hondo. I wasn’t alone. There were many other students under similar circumstances. We didn’t complain, and I certainly didn’t want anyone to know. I’m sharing this with you because we know the struggle and obstacles you overcame and endured to be here. I want to acknowledge that struggle.”

Valedictorian Hanh “Jenny” Pham, who earned a 4.0 GPA, was honored with the Pellissier Family Award. As an immigrant from Hanoi, Vietnam, Pham arrived in the U.S. about four years ago. An early childhood education and accounting double major, she plans to pursue bachelor’s and master’s degrees at Cal State Fullerton.

Tiffany Nunez, who helped create and implement the College’s food pantry, gave the student address. Nunez served as both secretary and vice president of the ASRHC as well as a member of the College’s Presidential Search Committee.

Nunez, who will be transferring to UC Santa Barbara to study communications, said all of the graduates should be proud of their success.

“All the choices we make in life represent who we are. We made the choice to get out of bed every morning, to hike up that hill and get to class,” she said. “We have the dedication to reach our goals and receive our degrees.”

“As I look at all of you beautiful people, in your caps and gowns, I hope that each and every one of you are proud of yourselves, because this is a huge accomplishment. Class of 2019, we are finally getting this degree!” Nunez said.

After high school, Gonzalez worked two part-time jobs to support his family. A survivor of Hirschsprung’s disease as a baby, he decided to seek a degree in science, technology, engineering and math (STEM) fields, earning associate degrees in biology and chemistry. He is considering seeking a four-year degree in life science or biochemistry at a Cal State or UC campus.

Lozano, who is part of the College’s Pathway to Law School program, was honored for his service to the College and dedication to his studies. Lozano earned a 4.0 in three consecutive semesters and served as vice president of the Pre-Law Society.

He led planning of events such as a Pathway to Law School/Ferias Legales Mentorship Mixer. He has earned an Associate Degree for Transfer in philosophy and will continue his studies at UC Berkeley as a philosophy major. He will receive priority admission review at eight partner law schools, including UCLA, Loyola Marymount, UC Davis, UC Berkeley and UC Irvine.

Mesones, a grandmother, is a returning student who married young and raised a family as a single mother. After battling and defeating fibromyalgia and breast cancer, she reignited a childhood love of language and enrolled in a French class at Rio Hondo College. This passion of Mesones’ led to deeper, more comprehensive studies. She will graduate with four degrees – communications studies, social behavior and self-development, art and human expression, and social studies. She will transfer to UC Berkeley.

Skinner, a former Marine sergeant, maintained a 4.0 GPA throughout his Rio Hondo College career. He mentored fellow veterans at Rio Hondo College and served as president of the Veterans Club. He organized Veterans Week activities and spoke at community events, including the College’s 9/11 Memorial. Skinner earned an Associate of Science in general studies with an emphasis in science and mathematics. He will study environmental science and engineering at Harvard University.

In addition to the students, the ceremony celebrated the 2019 Fellow of the College, professor and counselor Belen Torres-Gil. Torres-Gil retired in 2017 after 29 years at Rio Hondo College and 40 in education. Mendez credited Torres-Gil with helping him pursue his dreams.

“She is directly responsible for encouraging me to transfer when I didn’t have the courage,” he said. “Belen’s dedication to Rio Hondo College only touches the surface of who she is as a person and the significant impact she has made in the lives of so many students.”

Torres-Gil told graduates that the choices they make matter, and to make the most of their time and their relationships. As an example, she told a story about a young man who asked to be her intern 13 years ago and, today, heads a community college’s counseling department. She then noted his sister also interned with her and is receiving a master’s degree this year. And finally, she added that the young man’s mother was inspired to return for her own degree.

“My faculty colleagues and I create legacies and stories like this every day in our work. It’s why we choose the work we do,” she said.

The ceremony was one of several to honor graduates this spring. On May 22, a pinning ceremony celebrated 80 nursing students who earned Associate Degrees in Nursing, 25 students who received vocational nursing certifications and 53 who qualified for certifications in nursing assistant programs.

On May 17, the students who received the College’s new Bachelor of Science in automotive technology were celebrated at a dinner and received stoles marking their achievement. The four-year degree is part of a historic experiment in which a handful of community colleges have been allowed to create bachelor programs in high-demand career fields.

RHC_COMMENCE_1-4: Rio Hondo College celebrated 1,828 graduates at its 56th annual Commencement on May 23. 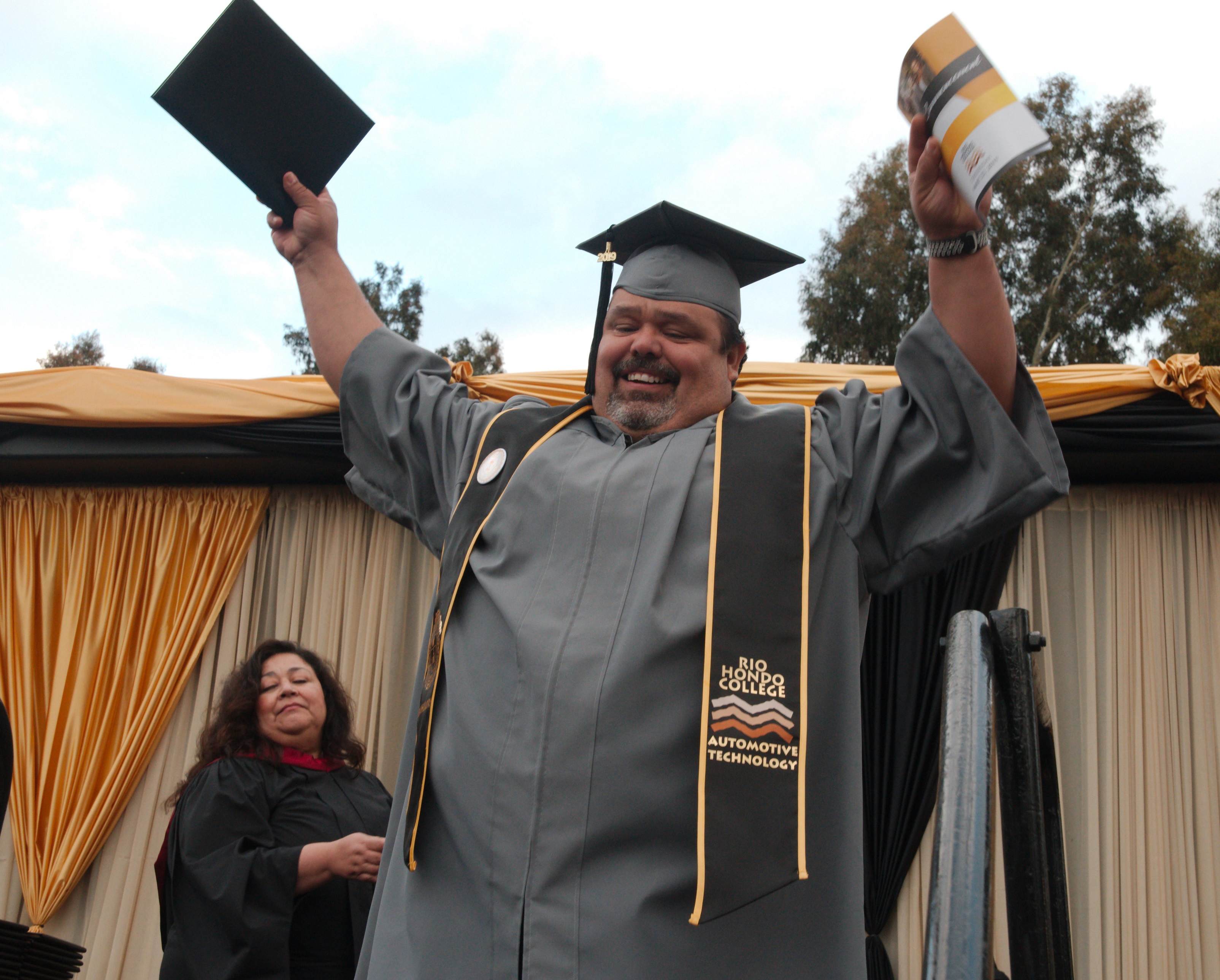 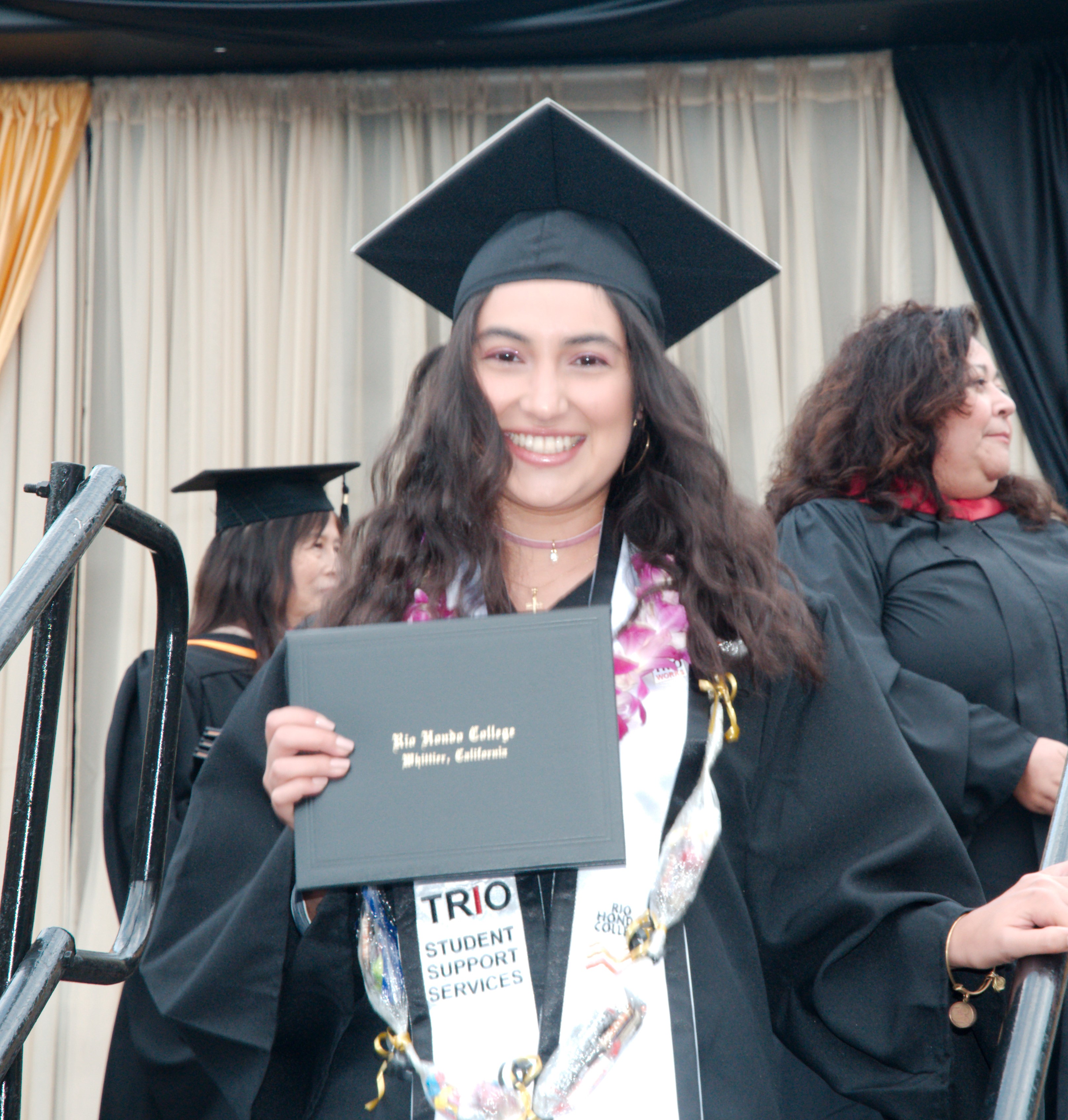 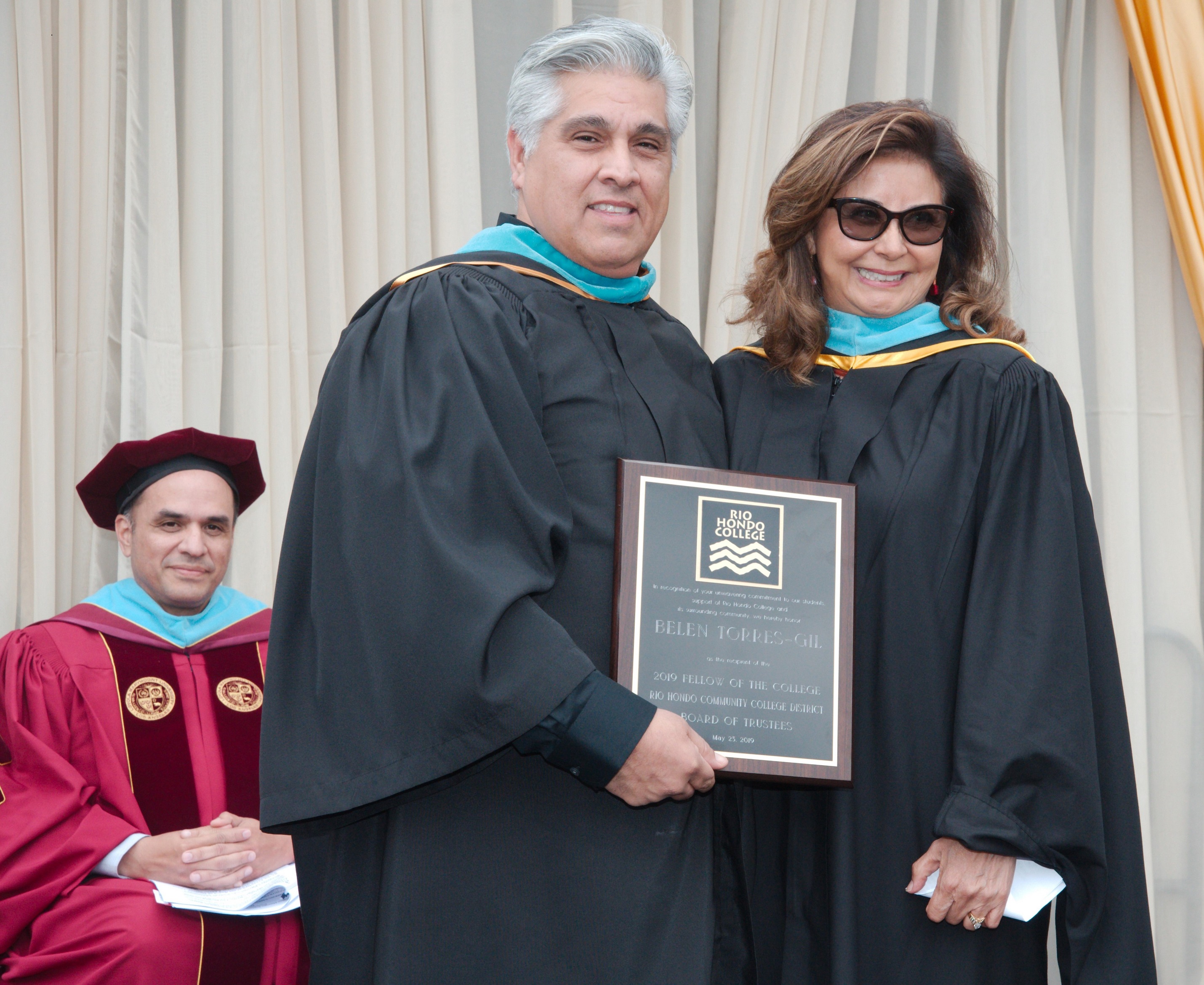