WHITTIER – Río Hondo College student Kimberly Yanez carefully measured out seven grams of dry hops into a glass beaker, the first step in a classic formula for converting processed grains into a liquid wort before placing it into a fermenter, ultimately becoming a delicious British ale.

The lesson in microbrewing is part of Río Hondo College’s new introductory level biotech course, Fermentation Technology. Inspired by the ever-expanding craft beer industry, Fermentation Technology is the first class of its kind offered by a Southern California community college, with the goal of training the next generation of professional microbrewers.

“Los Angeles County is home to nearly 100 breweries and they are looking for new hires who are fully trained in the science of fermentation and beer making,” Río Hondo College Biotech Professor Robert Bethel said. “Although anyone can use a homebrewing kit to make their own beer, to become a professional you need to have a thorough understanding of the biotechnical process.”

Fermentation Technology covers a variety of topics, such as the technique known as batch yeast fermentation, the biology and genetics of yeast, the influence of raw materials such as hops and malt, the history of beer brewing and current status of the industry, analysis of equipment and technical aspects of brewing, and the design, formulation and execution of brewing beer in a hands-on environment.

For Yanez, who works as a bartender, the class offers an opportunity to research her profession as she considers opening her own drinking establishment and, possibly, her own brewery.

“I had no idea what an extremely complicated process it is to brew beer,” Yanez said. “There is a lot of math and a lot of attention to detail. You need to know how to use your ingredients, incorporate the right equipment, strictly adhere to a recipe and plan your time. It’s fascinating. I love it.”

MORE
According to Bethel, the advantage of a profession in brewing is that it can be done anywhere at any time of the year, as opposed to winemaking, which requires an ideal climate and is restricted to a limited vinting season. Additionally, while wine is expected to change from year to year with each new crop, beer must taste the same every time.

“Beer has a very dedicated customer base, which must be kept happy and loyal, especially now with so much competition,” Bethel said. “Not only do we cover the scientific aspects of brewing, we teach the students the nuances of each ingredient, where to source them and how to perfect their product. The goal is for students to walk into a brewery and get hired.”

Fermentation Technology students are preparing to take their first field trip to a local brewery to gain firsthand knowledge of the industry. Río Hondo College has partnered with an advisory committee of local brewers, who will lend their advice and expertise to students.

BREWERY1: Río Hondo College Biotech Professor Robert Bethel stands next to a fermenter, used in the final stages of beer brewing, during a Fermentation Technology class designed to train the next generation of professional microbrewers. The class introduces students to the science of beermaking and connects them to local breweries across southern California.

BREWERY2: Río Hondo College Biotech Professor Robert Bethel talks with his Fermentation Technology students Robert Miller, Kimberly Yanez and Lucian Cojescu as they prepare to brew their first batch of craft beer. The class, the first of its kind at a southern California community college, teaches students the biotechnical processes necessary for a career as a professional microbrewer. 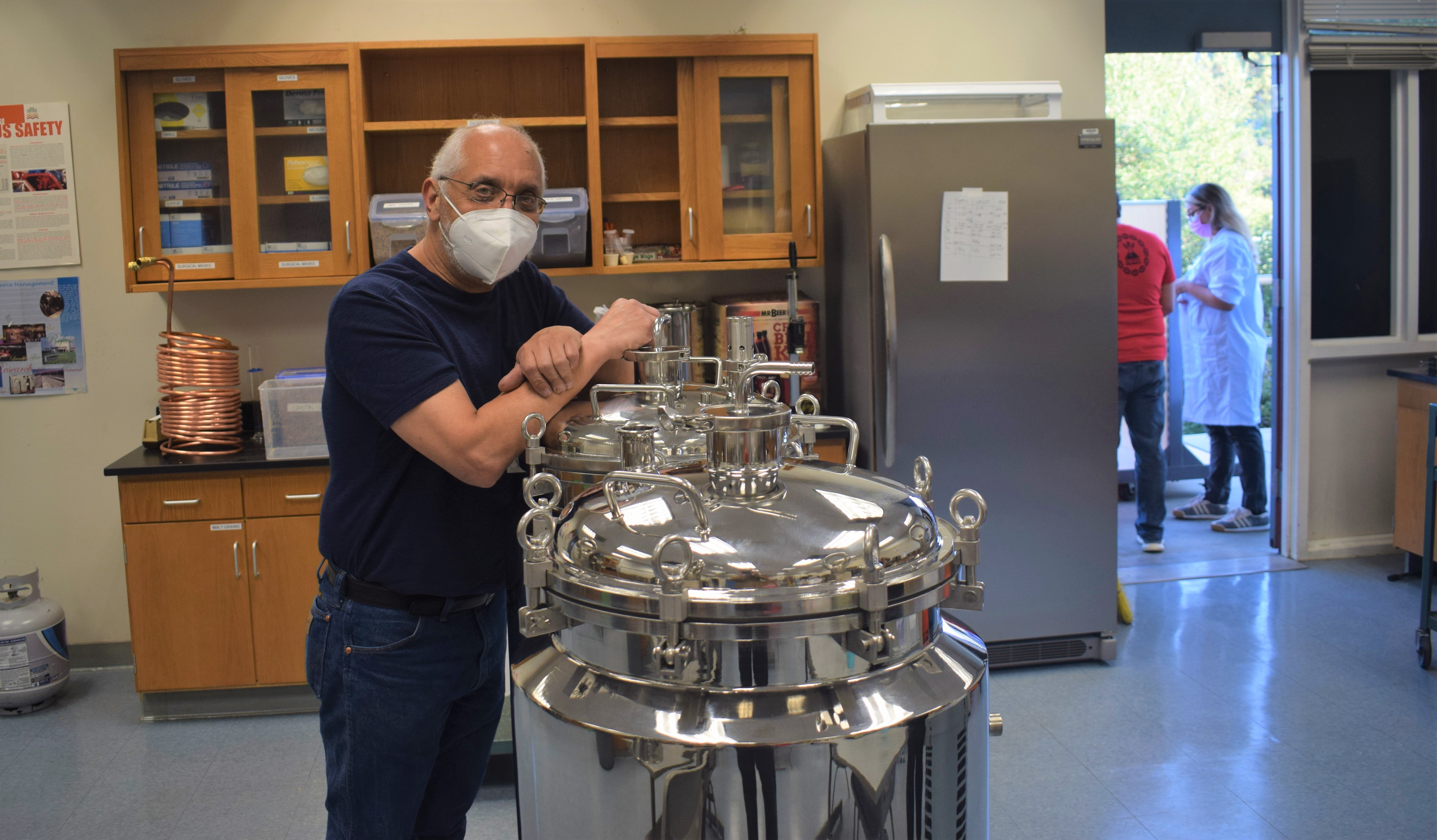