WHITTIER – Pioneer High School senior Lucas Lopez has had to endure many challenges in his education. As a member of a military family, he spent years traveling the country, bouncing from school to school; as the brother of family members who have been diagnosed with a rare genetic condition, he has mourned siblings who have passed away at a young age.

Through it all, Lopez has found a home at Pioneer High and a family of friends in the Titan band, where he has played trumpet since joining as a freshman. Academically, Lopez has challenged himself with honors and Advanced Placement classes, maintaining a 3.25 GPA, and plans to study music composition and music therapy in college.

For overcoming obstacles in his education and serving as a role model for others, Lopez was recognized with an Award of Merit by the Whittier Union Board of Trustees during its Jan. 17 Board meeting.

“Thank you to the Board for allowing me to represent Pioneer High School, it is quite an honor,” Lopez said. “Pioneer has provided me with so much during the past four years and I am very thankful. It feels so good going to Pioneer every day because there is always something new going on and I love my music classes. I’d like to also recognize and thank my family and friends for always being there and supporting me.”

After years of living on military bases – which made it difficult to make friends and form genuine connections – Lopez and his family relocated permanently to Whittier, just prior to his freshman year. Lopez quickly bonded with his Titan bandmates and said that for the first time he was able to establish long-term friendships with his classmates.

At home, Lopez remained close with and cared for his older sister Hannah, one of his two siblings diagnosed with Sanfilippo syndrome, a genetic condition that targets the brain and nervous system. This condition had also claimed Lopez’s younger brother, Aiden, at three years old.

In the summer before Lopez’s senior year, tragedy struck the Lopez family twice. First, Lopez’s grandmother died and then Hannah lost her battle with Sanfilippo syndrome. Though the grieving process has been difficult, Lopez said he has found a system of support through his friends and Pioneer High’s student well-being program.

It hasn’t been easy, as Lopez has had to deal with his own health issues, as when he suffered a public panic attack on campus. Connecting with Pioneer High social worker Karen Gonzalez, Lopez now employs a series of breathing techniques and coping strategies when he is overwhelmed or beginning to panic. On campus, Lopez is a frequent visitor to the school’s tranquility lounge, where he goes when he needs to escape.

Another calming method Lopez employs is to carry a notebook with him at all times, where he writes down notes and song lyrics. After his sister Hannah died, Lopez used the notebook to write a song for her as a way to remember and honor her. Lopez believes sharing his story is important to help other students get through difficult times.

Inspired by the Rev. Martin Luther King Jr., Lopez understands that life is full of choices, and he chooses to try and find the good, motivated by King’s quote, “If you can’t fly then run, if you can’t run then walk, if you can’t walk then crawl, but whatever you do, you have to keep moving forward.”

“Lucas inspires his classmates and teachers every single day,” Pioneer High Principal Mary Chapman said. “We are so proud of Lucas for overcoming the obstacles in his path and moving forward in his life. We are so happy Lucas has found the band, his friends and a true sense of self as a Pioneer High student. We look forward to hearing about his bright future.”

WUHSD_LOPEZ1: Pioneer High School senior Lucas Lopez was honored with an Award of Merit by the Whittier Union Board of Trustees during a meeting on Jan. 17, recognizing him for overcoming obstacles in his education and serving as a role model for others. 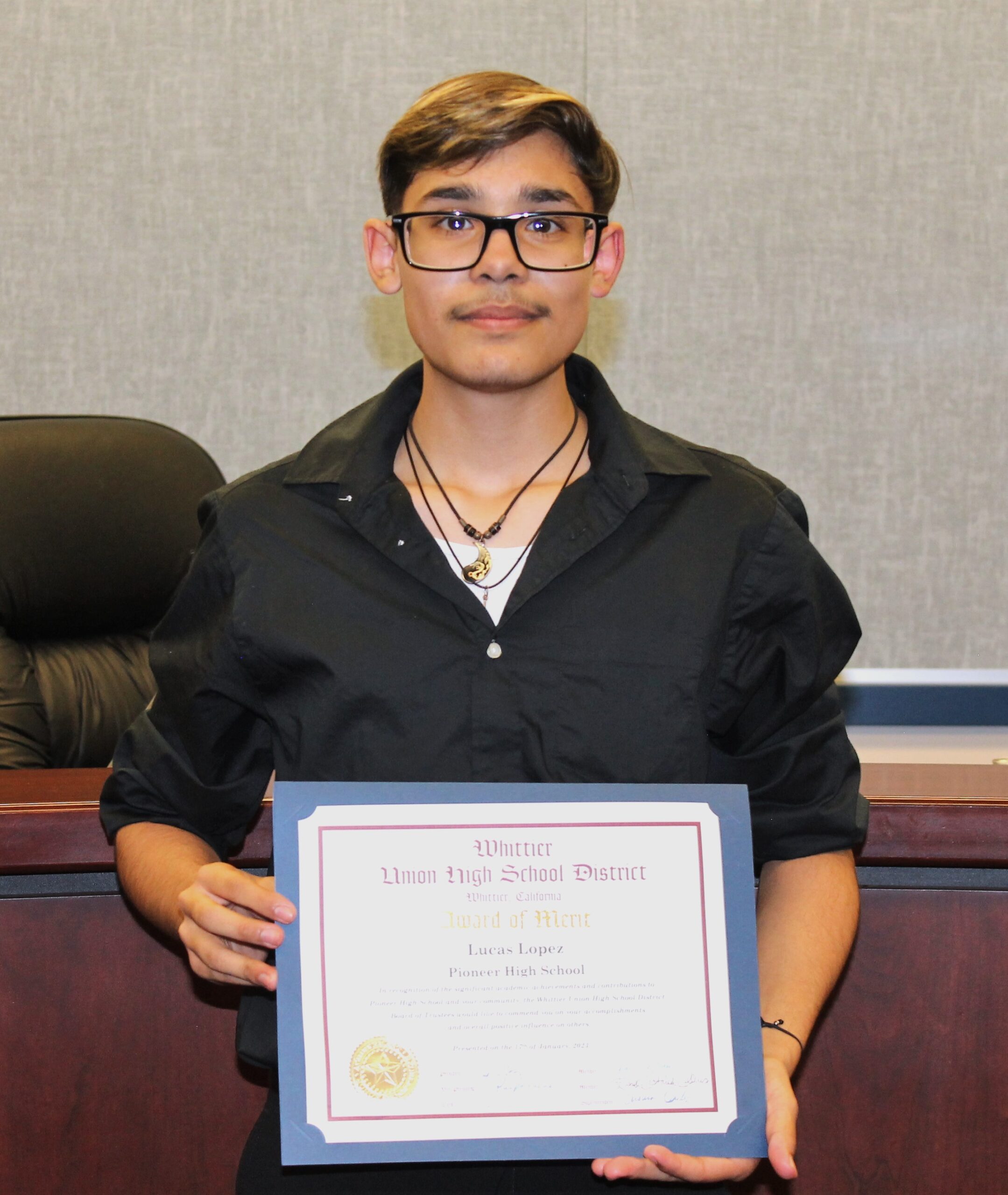