Now, Akuamoah’s ability to connect with students and help them thrive through challenges has others singing her praises. In September, she was named one of 16 Los Angeles County 2019-20 Teachers of the Year.

Los Angeles County Superintendent of Schools Debra Duardo honored Akuamoah and her fellow outstanding educators during the annual Teachers of the Year banquet on Sept. 20.

The 16 were selected from among 61 teachers representing 56 districts, which had first chosen them as their Teachers of the Year.

“Being honored in this way is something that I never thought about. It was beyond my comprehension,” Akuamoah said. “I’m so grateful to my students, who have taught me empathy, patience and understanding.”

Akuamoah heads the Paramount Park Leadership Academy, which brings together students who require additional support in a variety of academic and socio-emotional facets.

She helped start the Leadership Academy four years ago as a part-time duty along with teaching language arts. But the school’s positive response to the academy compelled her to take on the role full time.

“I love working with the child whom no one thinks can achieve or who has been doubted. Seeing them morph into a caring, successful student is the best feeling in the world,” Akuamoah said.

Akuamoah is in her 16th year as an educator. She began as a substitute in Paramount Unified. Current Paramount Park Principal Kevin Longworth recognized her talent and urged her to return after she spent stints at Morena Valley Unified and charter schools.

“We feel honored that we get to have her at Paramount Park every day,” Longworth said. “She has special gifts to reach students with the highest needs. She is able to break down barriers and become such a positive influence in their lives.”

Five of the 16 LA County TOY selections will be named statewide honorees in November, with one of them chosen to represent the state in the National Teacher of the Year contest in spring 2020.

“Felicia is an awesome reflection of the excellence in this District,” Paramount Unified Superintendent Ruth Pérez said. “Congratulations to her, Paramount Park Middle School and the District as a whole, for creating a culture of excellence that pushes us all to be better.”

100719_PARAMOUNT_TOY: Paramount Park Middle School teacher Felicia Akuamoah holds up her winning check after being named one of 16 Los Angeles County 2019-20 Teachers of the Year. 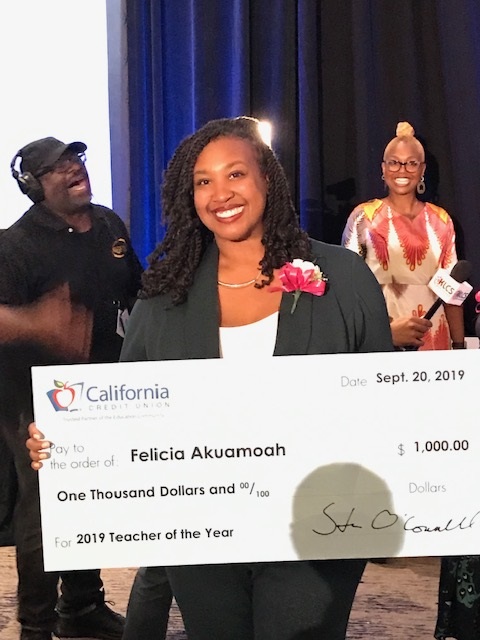