Paramount, CA – Paramount High School senior Osvaldo Galaz is affectionately known around his campus as “the chef,” a title he has earned due to his considerable culinary talent.

Galaz showcased his ability for all to see in October when he faced off against a handful of select high school students and won the Marukan Cup of Culinary Excellence at Cerritos College.

“Everyone around the school knows about it. There’s a huge poster of me in a chef’s outfit in the main office,” Galaz said. “It’s been really nice; everyone has been super encouraging.”

Galaz captured the competition in storybook fashion, overcoming an accidental cut of his finger that forced him to start from scratch after disinfecting his prep area. The miscue cost Galaz valuable time as the cooks were given just an hour to complete their dishes.

In the end, Galaz wowed the judges with a menu that included baked panko chicken with roasted sweet potatoes, coleslaw, pickled cucumber and avocado cilantro dipping sauce. The victory earned Galaz a check for $1,000 to go with his newfound notoriety.

“I showed my mom the check on FaceTime and she couldn’t believe it,” Galaz said. “The practice that I did with my teachers really helped me feel confident going into the competition. I had a lot of people at PHS that inspired me to do my best.”

Galaz prepared for the Marukan Cup through the school’s Food Service and Hospitality Pathway program, which teaches students the intricacies of food preparation and service – including food safety and etiquette. Galaz attends two classes per day in the program, which will earn him a Servesafe Food Handlers Certificate upon completion allowing him to begin working in the culinary arts.

The program is one of six pathways offered by Paramount High School’s career technical education program, which provides students with the academic and technical instruction to prime them for the job market.

“Our Pathway programs are equipping our students with the skills they need to succeed once they leave the classroom,” Paramount USD Superintendent Ruth Pérez said. “They’re leaning how to problem solve, to think critically and to use their skills in real-word situations.”

Galaz plans to use his lessons to open his own restaurant featuring Mexican and Italian cuisine. He said he developed his love for the kitchen while watching his mother and grandmother create meals growing up. These days, it’s Galaz who whips up the meals during family gatherings.

“Osvaldo is a wonderful example of a student who continues to develop his talent and skill and inspires students around him to do the same,” Board President Carmen Gomez said. “We are so proud of all Osvaldo has accomplished and will continue to support him on his chosen path.”

122018_PARAMOUNT_CULINARY: Paramount High School senior Osvaldo Galaz poses with his check for $1,000 after winning the Marukan Cup of Culinary Excellence. 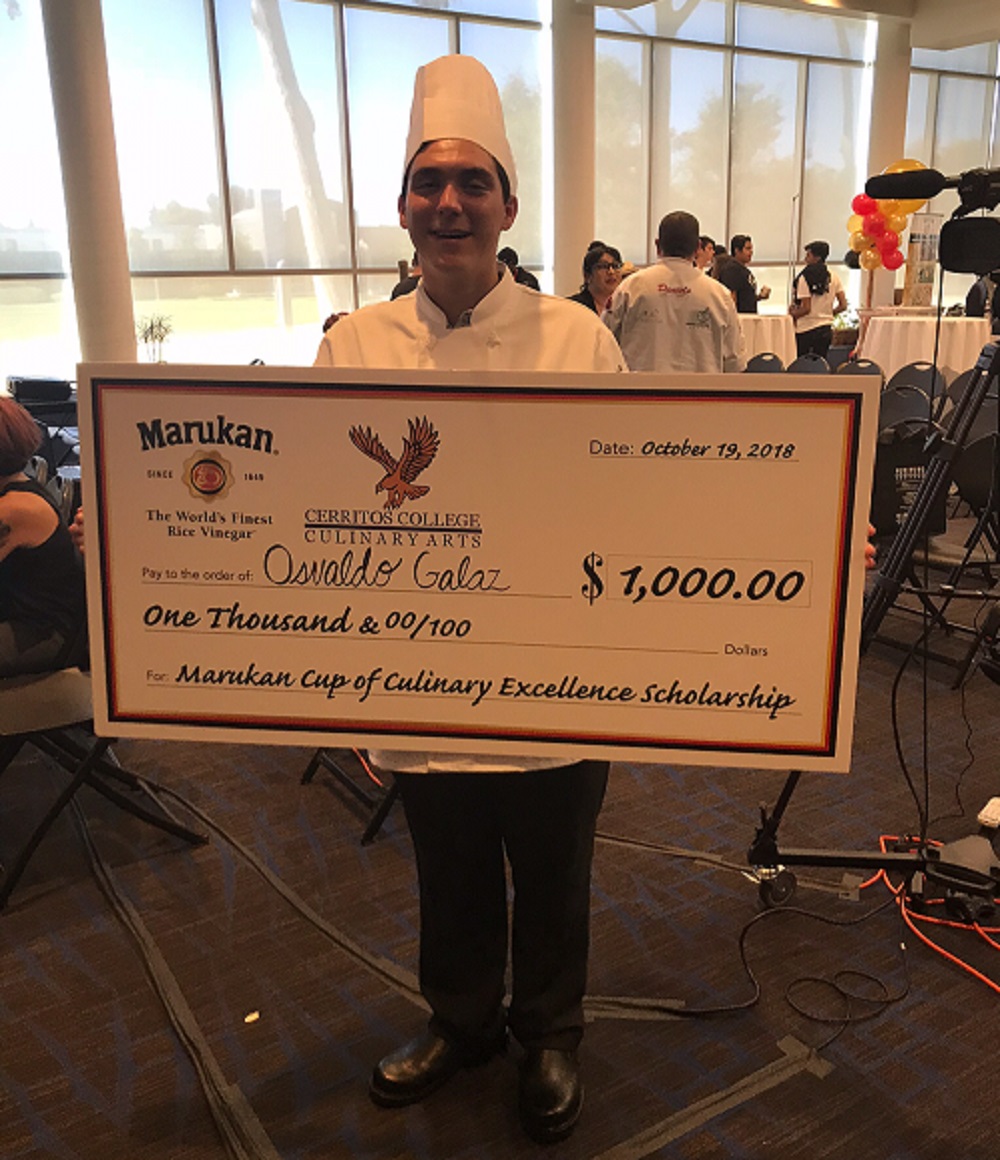