Lynwood – Banda Nueva Dinastia de Zoochila, a second-generation Oaxacan brass band from Lynwood, is teaching its young members that the discipline required to master a musical instrument also provides a pathway to higher education. The internationally-acclaimed philharmonic band composed primarily of Lynwood Unified students, is sending nearly 90 percent of its student-musicians to college.

Banda Nueva Dinastia debuted in 2001, with 36 first- and second-generation Oaxacan members attending Lindbergh Elementary School. Though dropout rates at that time were high throughout the community, all 36 original Banda Nueva Dinastia members graduated high school, with many of them becoming the first in their family to attend college.

“Oaxacan immigrants have brought profound changes to the neighborhood surrounding Lindbergh Elementary, which has greatly benefited from a commitment to music and education,” LUSD Superintendent Gudiel R. Crosthwaite said. “The matriculation rates among Oaxacans are outstanding, and provide a template of success for the entire District.”

Banda Nueva Dinastia was formed by brothers Moises and Porfirio Hernandez – immigrants from the Zoochila municipality in southern Mexico – as a way to preserve Oaxacan/Zapotec culture and provide an alternative to street gangs, bringing to Lynwood a tradition of Oaxacan community-based philharmonic bands that dates back almost 100 years.

“It is important for our children to have something that keeps them focused on academic success,” Porfirio Hernandez said. “We started this band as a way to keep our kids off the street and learn responsibility. Our first-generation members have moved on, and now we are teaching our second-generation the traditions.”

Banda Nueva Dinastia is composed of players who are current and former Lindbergh Elementary students, as well as elder immigrants from Zoochila. They have a rigorous rehearsal schedule, meeting at least three days a week, often practicing at Lindbergh. For the students, maintaining good grades in school is a requirement to staying in the band.

“Being in the band helps me concentrate with schoolwork. I get frustrated sometimes with some subjects but when I hear music it helps me calm down,” said Lindbergh Elementary School fifth-grader Emily Perez, who has played soprano saxophone in Banda Nueva Dinastia since she was in kindergarten.

Porfirio’s daughter, Lynwood High Class of 2006 graduate Jessica Hernandez, was one of the original members of Banda Nueva Dinastia. Jessica became musical director shortly after graduating from UC Riverside in 2010 with a music degree. Hernandez is the first Oaxaqueña to lead a Oaxacan brass band in California, as well as the first to receive a music degree from any four-year college.

“It is an incredible honor for me to be leading the band that was founded by my family,” Jessica Hernandez said. “In the beginning, it was the elders in our community who were helping us stay in school and become outstanding citizens. Now, the younger generation is showing its appreciation by giving back to the community.”

In January, Banda Nueva Dinastia shared the stage with three other pioneering indigenous Los Angeles-area music groups during the inaugural Oaxacan Philharmonic Bands Audition at UC Riverside organized by the department of music. Jessica Hernandez shared conducting duties with her uncle, Moises, including a finale that brought all 140 musicians from the four bands together as one.

The band is rehearsing for a multi-city 2020 tour that will take them to Mexico City, Oaxaca and Zoochila. Fundraisers are planned in April and May to support the costs of the tour.

“Lynwood Unified’s primary objective is for all students to be college-ready by graduation, and we are tremendously supportive of the Hernandez family and all they have achieved in preparing their children to succeed,” LUSD Board President Alfonso Morales said.

032218_LUSD_OAXACAN2: Jessica Hernandez leads the Banda Nueva Dinastia de Zoochila during a performance at the Oaxacan Philharmonic Bands Audition at UC Riverside in January. The band, composed primarily of Lynwood Unified students, is sending nearly 90 percent of its student-musicians to college. 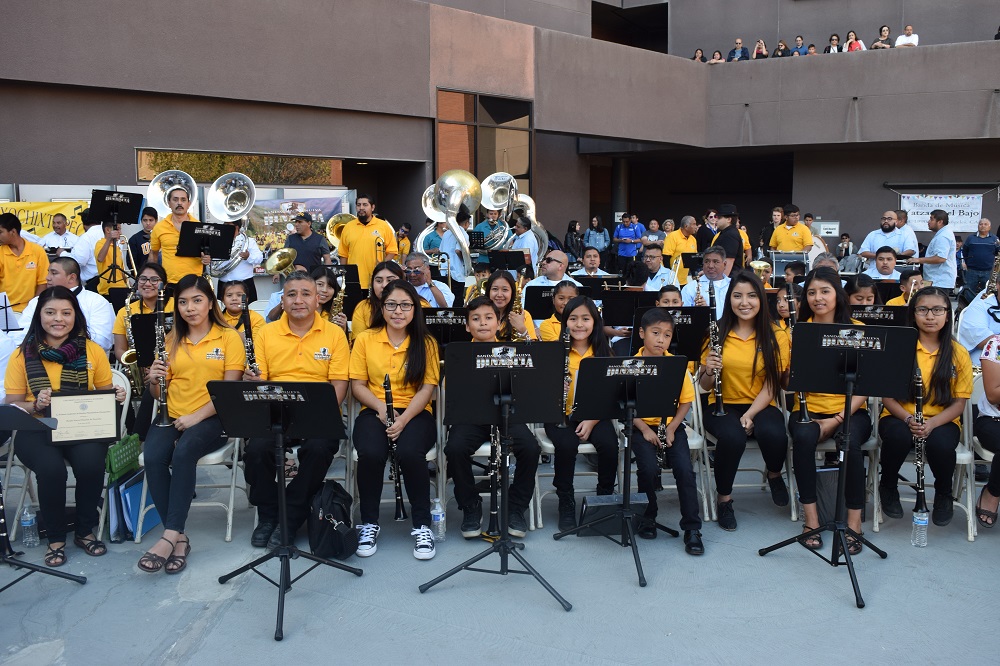 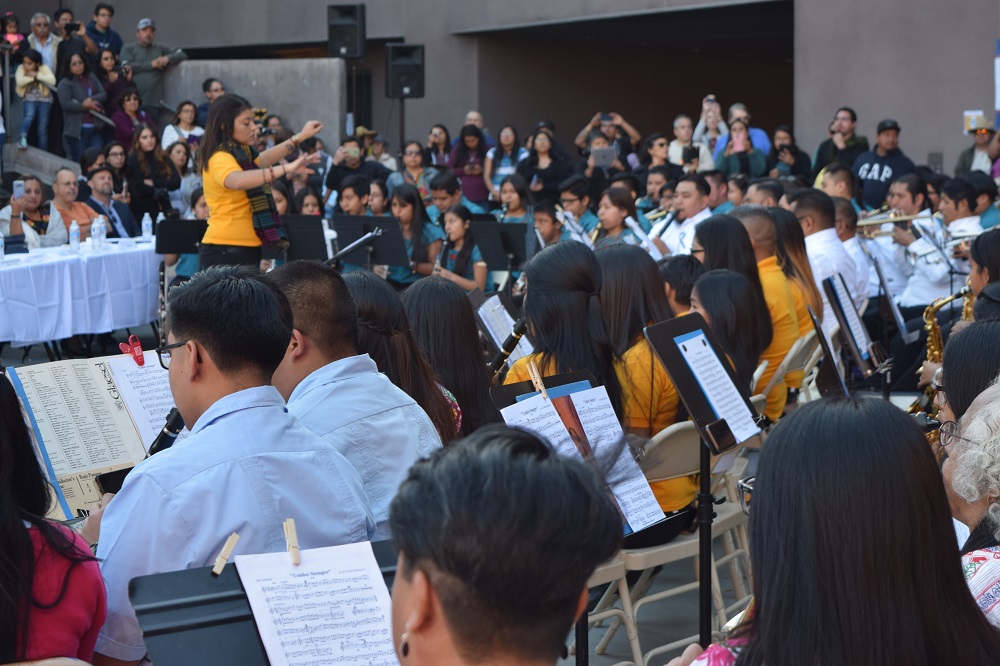