MONROVIA – When Clifton Middle School’s Hippie Bots robotics students travel to Spain as the sole United States representative at the FIRST Tech Challenge Barcelona Championship on Feb. 27-28, they will continue a tradition of fulfilling the school’s high expectations through commitment and teamwork.

“The Hippie Bots exemplify the spirit and determination of the Monrovia Unified robotics program, and their roles as world ambassadors speaks volumes on how far the District has come in such a short period of time,” Monrovia Board of Education President Rob Hammond said.

Clifton eighth-graders Lupe Hilario and Ty Weiss didn’t know each other when they joined the Hippie Bots at the beginning of the 2019-20 school year, but they shared an admiration for the team’s accomplishments and a desire to contribute to its success, which includes trips to Shanghai in 2016 and the Netherlands in 2017.

“I always looked up to the Hippie Bots,” Hilario said. “I looked at their success and their competitions and I really wanted to be part of that and learn engineering. I decided to apply, and I made it.”

Hilario compiles the engineering notebook for the Hippie Bots team while Weiss helps to build the robot and acts as the driver during competitions – and the two rely on each other to ensure the robots perform at peak efficiency.

“My brother, Jake, was a Hippie Bot when the team went to Shanghai, and I thought the competitions were fun,” Weiss said. “Then my friend joined the Hippie Bots last year and he really enjoyed it too, so I decided to do it. It’s really cool.”

Clifton history teacher Paul Flores had no experience with robotics when he accepted the role of robotics teacher in 2015, but the strategies he developed as a football coach have helped his students remain calm under pressure during tournaments.

“One of the things we would preach as a coaching staff was to make practice more difficult than the actual game, so the game becomes easy,” Flores said. “When you step out there, there is no stress. The competitions should be fun. Everything is just muscle memory. It’s all decided during practice who’s going to win these competitions.”

Beyond the opportunity to showcase their talents, Hippie Bots team members are looking forward to meeting their international peers, pick up pointers from competitors, learn European history and make new friends.

“The District is deeply appreciative of the community support for our robotics program,” Superintendent Dr. Katherine Thorossian said. “Robotics is an investment in our students, and they are greatly increasing their ability to solve problems in the real world. Congratulations to Paul Flores and the Hippie Bots for continuing to achieve at the highest levels.”

A Go Fund Me campaign has been launched to cover costs related to travel, lodging, food, and shipping the robot. The goal is to raise $25,000. To donate, go to www.gofundme.com/f/hippiebots2020. 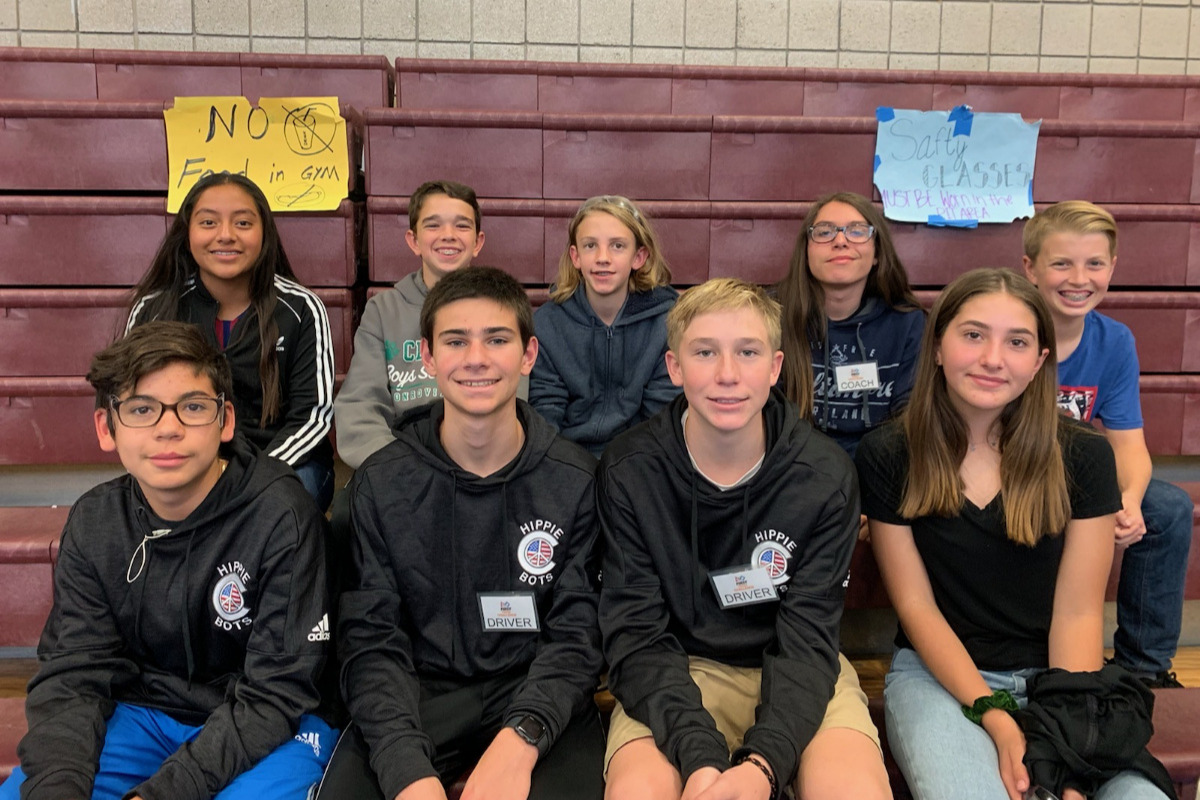