Lynwood – Actor and rapper Daveed Diggs, known for his role in the award-winning play “Hamilton”, spread a message of inspiration and embracing creativity on Feb. 24 when he joined Abbott Elementary School students for a virtual Black History Month Assembly.

Diggs shared his journey to artistic success and encouraged more than 300 students to pursue their passions during the special visit. Diggs is a mentor in the Turnaround Arts: California program which sees creative professionals engage with partner schools to celebrate the power and potential in communities.

“If you want to be an artist you should keep doing it,” Diggs told the Abbott students. “It may take a long time. It took me a while to figure out how to do this, but now I get to do it for a living.”

Diggs joined the event via Zoom where he found an anxious group of students excited to pick his brain about acting and music. In addition to playing the dual roles of ‘Thomas Jefferson’ and ‘Marquis de Lafayette’ in “Hamilton”, Diggs has also starred in television series and films.

Abbott student Afriyie Dwobeng-Manu, who opened the event with a piano rendition of “Lift Every Voice and Sing” alongside singers Xochitl Garcia and Giselle De Leon, asked Diggs about professional opportunities for musical artists.

“There will be a lot of jobs for you, you’re talented,” Diggs said. “You can create scores for movies, jingles in commercials – you can teach music. There are so many opportunities for musical artists.”

Abbott is cultivating young artists as one of just 27 schools in the Turnaround Arts: California program, which provides teacher training, a regional coach to facilitate Abbott’s strategic arts plan and coordinated support for public arts events, not to mention up to $10,000 in annual financial support to help ensure arts education for every Abbott student.
.
Since being accepted into the program in summer 2018, Abbott has expanded its arts curriculum to include a 45-minute art lesson per week for all K-6 students and added harmonica classes for third-grade students.

The school also unveiled a campus mural in 2019 that provides a visual statement about the school’s commitment to leveraging the arts for educational equity.

“Our participation in the Turnaround Arts program has introduced our students to so many new amazing experiences, like meeting Daveed Diggs today,” LUSD Superintendent Gudiel R. Crosthwaite said. “We are so thankful to Mr. Diggs for taking the time to celebrate the arts with our students and inspiring them to achieve their future goals.”

022521_LUSD_DIGGS: Actor and rapper Daveed Diggs, known for his role in the award-winning play “Hamilton”, paid a virtual visit to Abbott Elementary School students on Feb. 24 to inspire them to follow their passions. 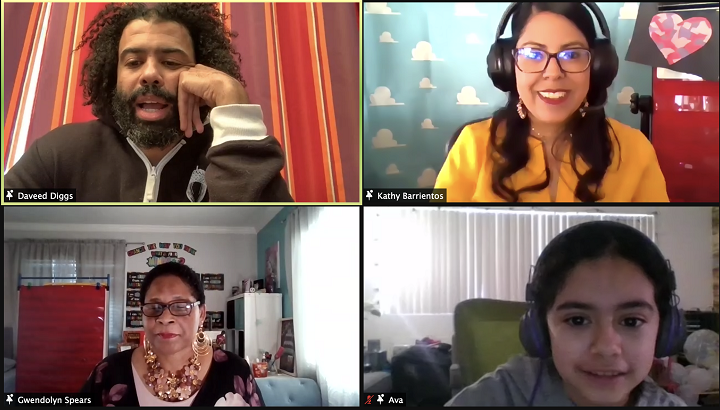