SAN DIMAS/LA VERNE – The atmosphere was electric as scores of supporters wearing face paint and proudly sporting school colors streamed into Citrus College Stadium to celebrate the golden anniversary of the cherished football rivalry between Bonita and San Dimas high schools, known as the Smudge Pot, on Sept. 10.

The 50th installment of the rivalry featured the return of nearly two dozen former Bearcats and Saints players and coaches who participated in the inaugural Smudge Pot game in 1972, who came to reminisce and cheer on their alma maters.

Bonita High School rallied to win the game 21-13 in a highly competitive and emotionally charged defensive struggle that saw seven turnovers, including a San Dimas fumble recovery that led to a touchdown. The competitive spirit on the field was matched in the stands as students and supporters tried to top each other all night, raucously cheering on every play.

“The Smudge Pot is special because although it is a rivalry game, it has a way of bringing together the entire Bonita Unified community,” Interim Superintendent Matt Wien said. “It was an honor to have our former players and coaches on the field and in the stands to celebrate the 50th anniversary of this tradition. They are proof that the memories of the Smudge Pot games, rallies and activities will be cherished by our students for years to come.”

For the former players and coaches who attended, the game provided a chance to catch up and reminisce about their days of glory on the football field and revel in the camaraderie that brought them together as teammates and lifelong friends.

The Saints’ contingent was led by former head coach Bob Biaz, who earned his place in the history books by winning the first three Smudge Pot games, as well as assistant coaches Don Warhurst and Mark Olson. Running back Wayne Moses, who scored two touchdowns in the inaugural game, was also in attendance, along with Steve Barnard, Jeff Nelson, Greg Newborn, Christopher Osterman and Tony Perez Jr.

The returning Bearcats included Al Acosta, Andrew Castro, Jim Fehrs, Brad Frick and Grace Miller Elementary School teacher Amy Benson, who came in place of her deceased father, Terry Green. The Smudge Pot alums participated in the pregame coin toss, during which they were introduced to the crowd as they stood at midfield. The attendees also received gift bags with commemorative T-shirts, coffee mugs, school pennants and mascot stickers.

Though players on both sides exhibited pride in their accomplishments on the field, there were bittersweet memories of being friends and neighbors growing up, playing athletics together and forming strong bonds before the creation of San Dimas High separated them.

“We were classmates in junior high and then they separated us,” Osterman said. “We didn’t like that. We were all planning to go to Bonita and play together.”
The former classmates got their first taste of the rivalry in 1970 during a Bonita-San Dimas freshman game that ended in an 8-8 tie. The teams would continue to battle as underclassmen until 1972, when San Dimas fielded its first varsity squad.

Though the Smudge Pot memories were not as fond on the Bonita side, there were still plenty of stories to share about the 1972 season, including an early season game against Temple City High School, which had gone undefeated for three years, had won three straight CIF championships, and was riding a 44-game winning streak when Bonita met them.

Acosta, a safety and kick returner for Bonita, reminisced with Castro about a sequence of plays that epitomized the fighting spirit of the Bearcat team. Castro’s brother Frank was also on the team and his job was to tell Acosta whether to field a punt or signal for a fair catch.

“Temple City punts and I was yelling at Frank, ‘what do I do?’ Because it’s his job to tell me whether to fair catch or not,” Acosta said. “He went to block somebody, so when I got the ball – POW! I went one way, the ball went the other way. But it’s okay, because on the next play, I intercepted the pass. Ran it all the way back.”

Acosta and his wife Christina still live in La Verne and attend all Bonita home football games. They have one granddaughter who is a Bonita High graduate and another who is attending Roynon Elementary School.

The one thing both Bonita and San Dimas fans can agree on is that the Smudge Pot is still, after 50 years, the most fun game of the season.
“I love the Smudge Pot,” Christina Acosta said. “It’s fun. It’s a rivalry, but it’s fun.”

BUSD_SMUDGEPOT1: The Bonita High football team rejoices after defeating their cross-district rivals San Dimas High 21-13 to win the 2022 Smudge Pot title on Sept. 10. The cherished rivalry celebrated its golden anniversary, with players and coaches who participated in the inaugural contest in attendance to watch the 50th game in the series.

BUSD_SMUDGEPOT2: A San Dimas High School football player fights for extra yards during the annual Smudge Pot football game against Bonita High School, held on Sept. 10. Bonita won the highly competitive and emotionally charged game, 21-13, to secure bragging rights in the rivalry for the next year.

BUDS_SMUDGEPOT3: Former San Dimas High School head coach Bob Biaz, along with former assistant coaches Don Warhurst and Mark Olson, pose with the Smudge Pot prior to the 50th installment of the game, held on Sept. 10. San Dimas and Bonita players and coaches who participated in the inaugural game in 1972 attended the game and were honored during pregame festivities. 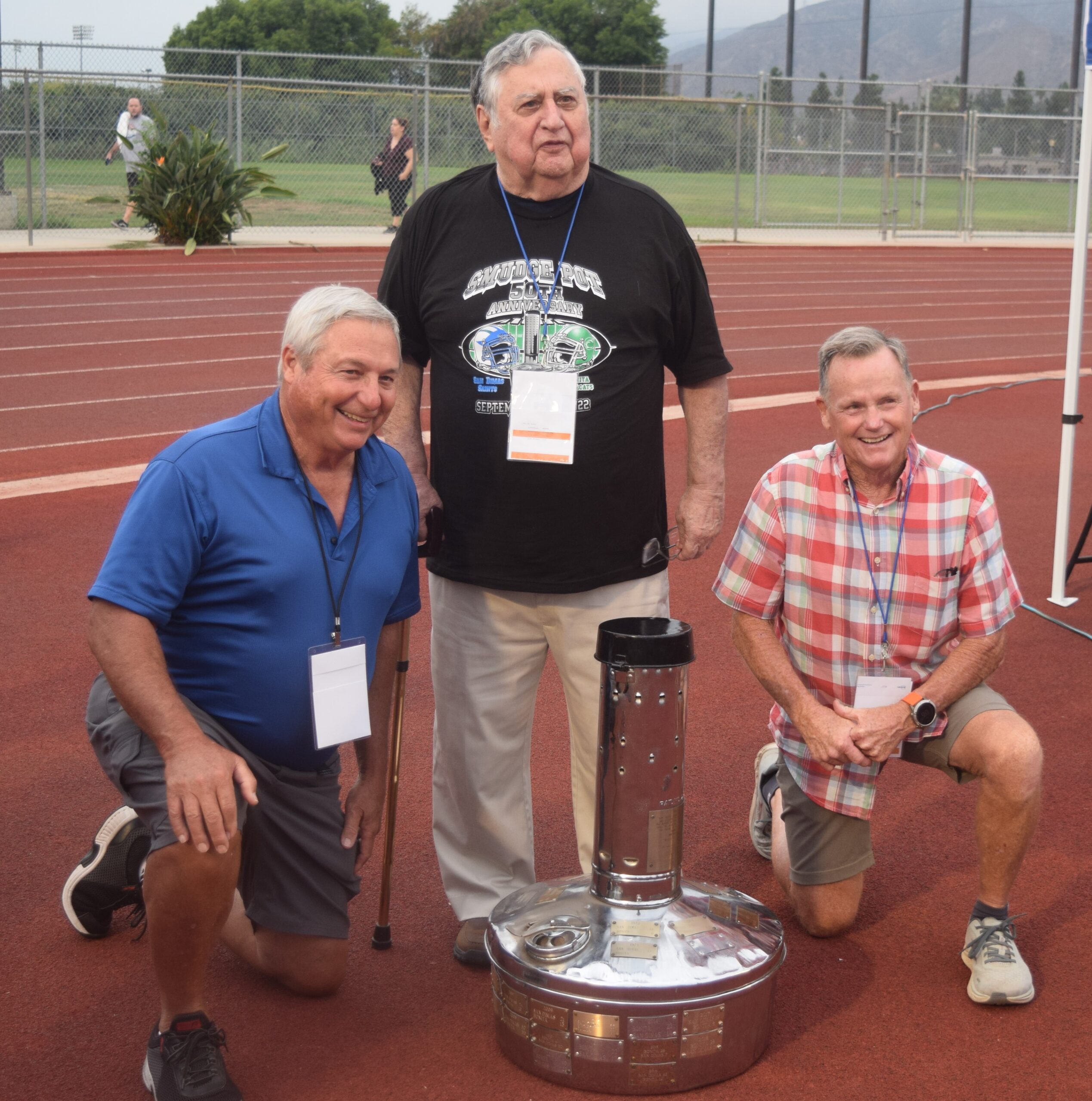 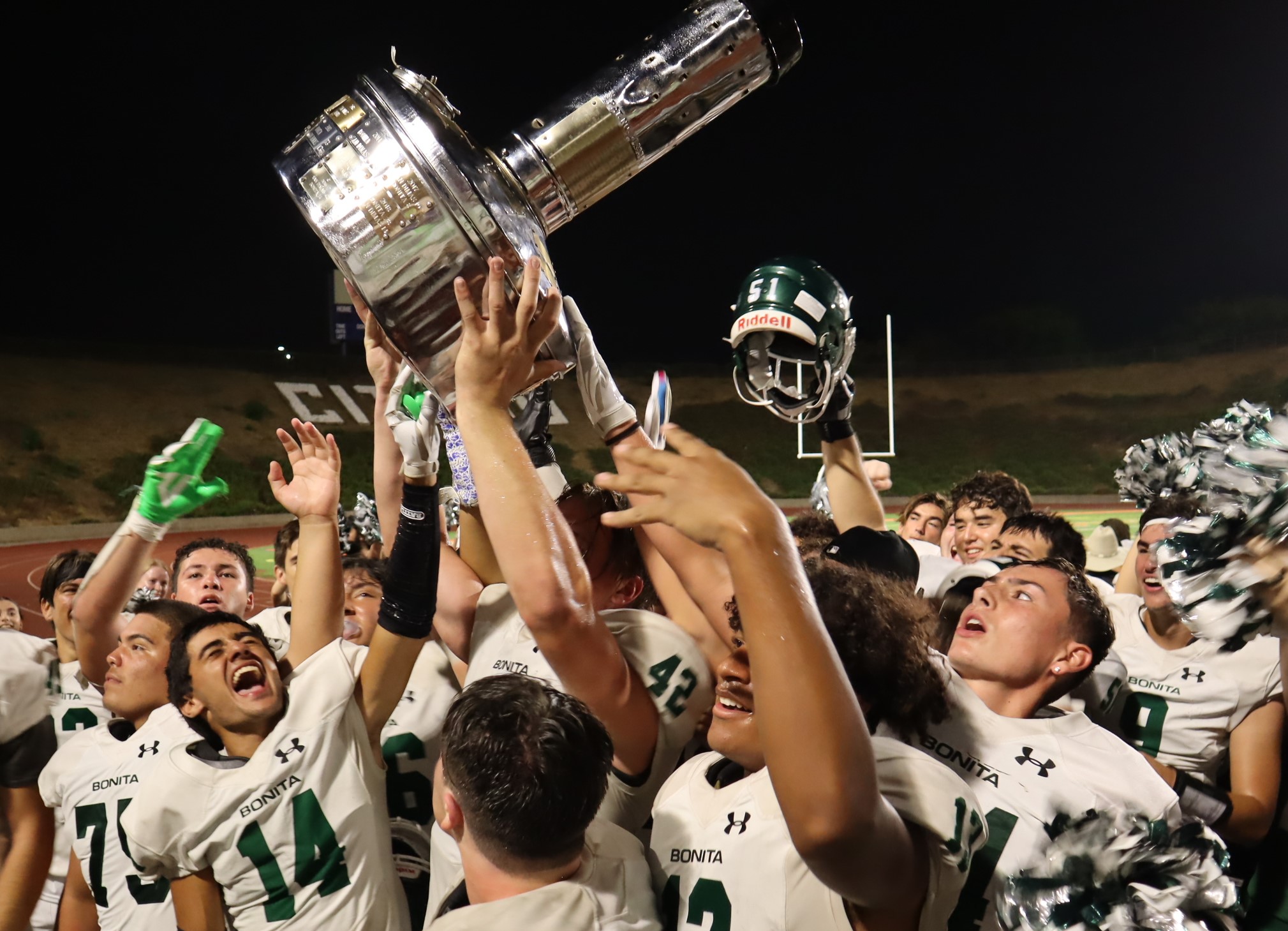 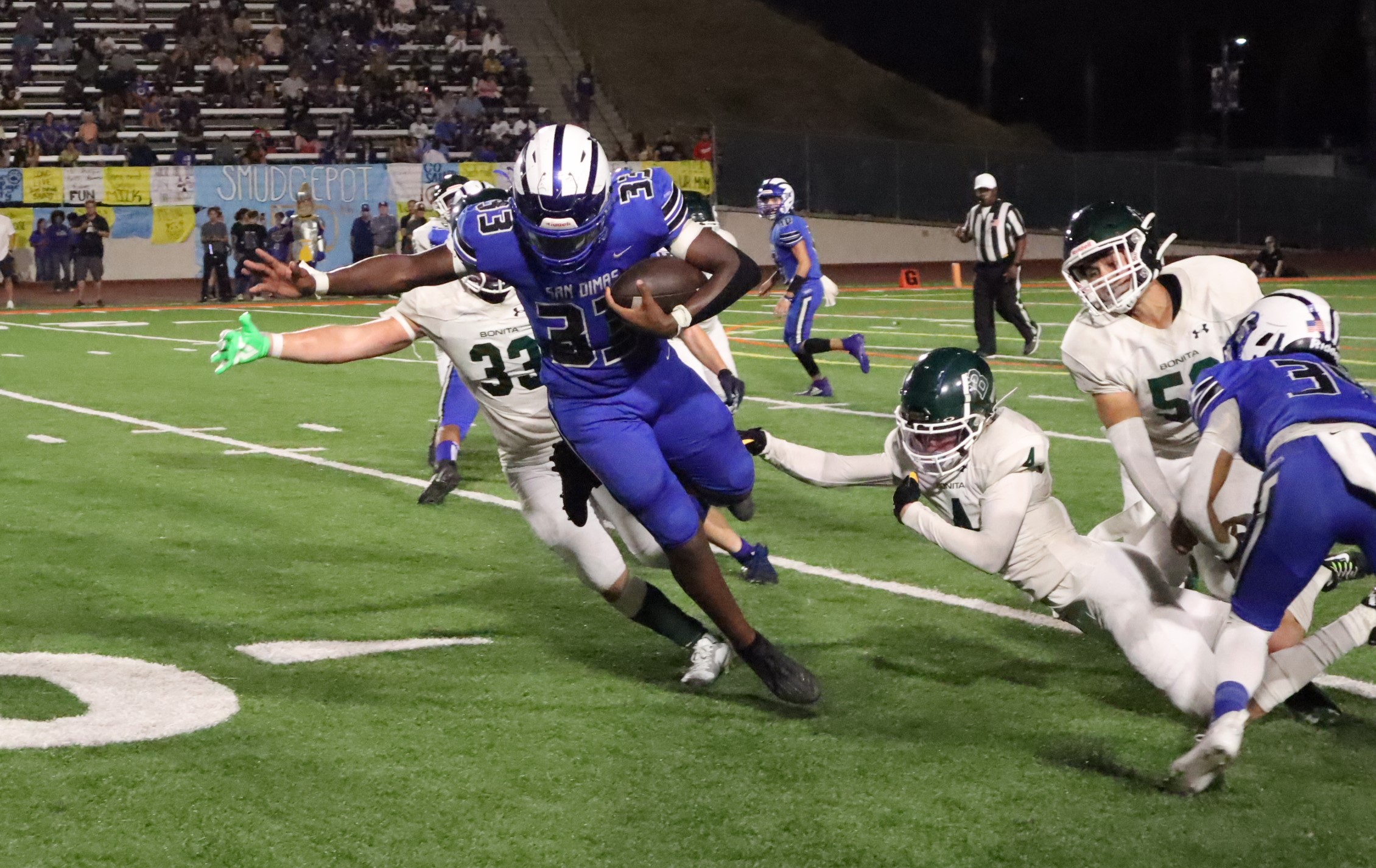