FONTANA, CA – A.B. Miller High School Class of 2001 graduate Lourdes Alcaraz was so intent on learning photography that she would spend hours after school in the darkroom perfecting her images. Known to family and friends as “Lulu,” the skills Alcaraz acquired at A.B. Miller led to a successful career as a professional photographer, specializing in weddings and portraiture.

Alcaraz was just hitting her stride as a professional when she was diagnosed with cancer and died in 2011. Family and friends gathered at A.B. Miller High’s fine arts building to pay tribute to her, dedicating a mural in Alcaraz’s honor on April 30.

“It is an honor for the family to be here today. This will forever be a place where students come to realize their dreams, just as Lulu did,” said Lourdes Perez, Alcaraz’s mother. “Everyone needs goals, something to aspire to. Lulu is an example for others to look up to. She took pride in leading by example.”

The mural features a portrait of Alcaraz, representations of her work and the quote, “Don’t let go to waste what was sacrificed for you to be here.” Alcaraz’s name will also adorn the fine arts building as she becomes the first A.B. Miller High School alumna to be honored for her “Rebel Spirit,” joining inspirational figures such as Diego Rivera, Thurgood Marshall, Toni Morrison, and Christine Darden.

“In my 23 years as a teacher at A.B. Miller, Lourdes was hands down my favorite student,” photography teacher Michael Garnes said. “She was so passionate about her art. She had tenacity, always asking to stay longer. She would work with a print for hours and her spirit let her know when it was finished. Lourdes is very much deserving of this honor, which will inspire generations to come.”

After graduating from A.B. Miller High School, Alcaraz studied photography at Chaffey College, eventually becoming an assistant for local photographer Michael Negrete from 2005 to 2007. Negrete was impressed with her work and took Alcaraz under his wing; helping her get her first professional jobs, teaching her the business side of photography and preparing her to open her own studio.

“When I first met Lourdes as a Chaffey College student, her work really stood out,” Negrete said. “Lourdes was a loving, caring, and passionate person with a magnetic personality. She lit up the room. She had the personality to be a great photographer, and she also had the entrepreneurial spirit it takes to make it in a tough business.”

During the mural dedication, family and friends looked through portfolios of Alcaraz’s art. One room in the building will be converted into an art gallery and display student art. A.B. Miller High School plans to hold a formal dedication for the gallery during the 2021-22 school year, and Alcaraz will be the first artist to have their work exhibited.

“I can’t think of a better alumna to honor for their Rebel Spirit than Lourdes Alcaraz,” A.B. Miller Principal Dr. Dustin Saxon said. “We want A.B. Miller students to see this and say ‘I can do this, it’s achievable.’ Thank you to Michael Garnes for his passion in bringing this together, and to Lourdes’ family for their tremendous support.”

FUSD_ABMILLER_ALCARAZ: Friends and family of A.B. Miller High School Class of 2001 graduate Lourdes Alcaraz gather in front of a mural dedicated to her memory during an April 30 ceremony. Alcaraz, a professional photographer who died in 2011, learned her craft at A.B. Miller, often staying late to work in the darkroom. 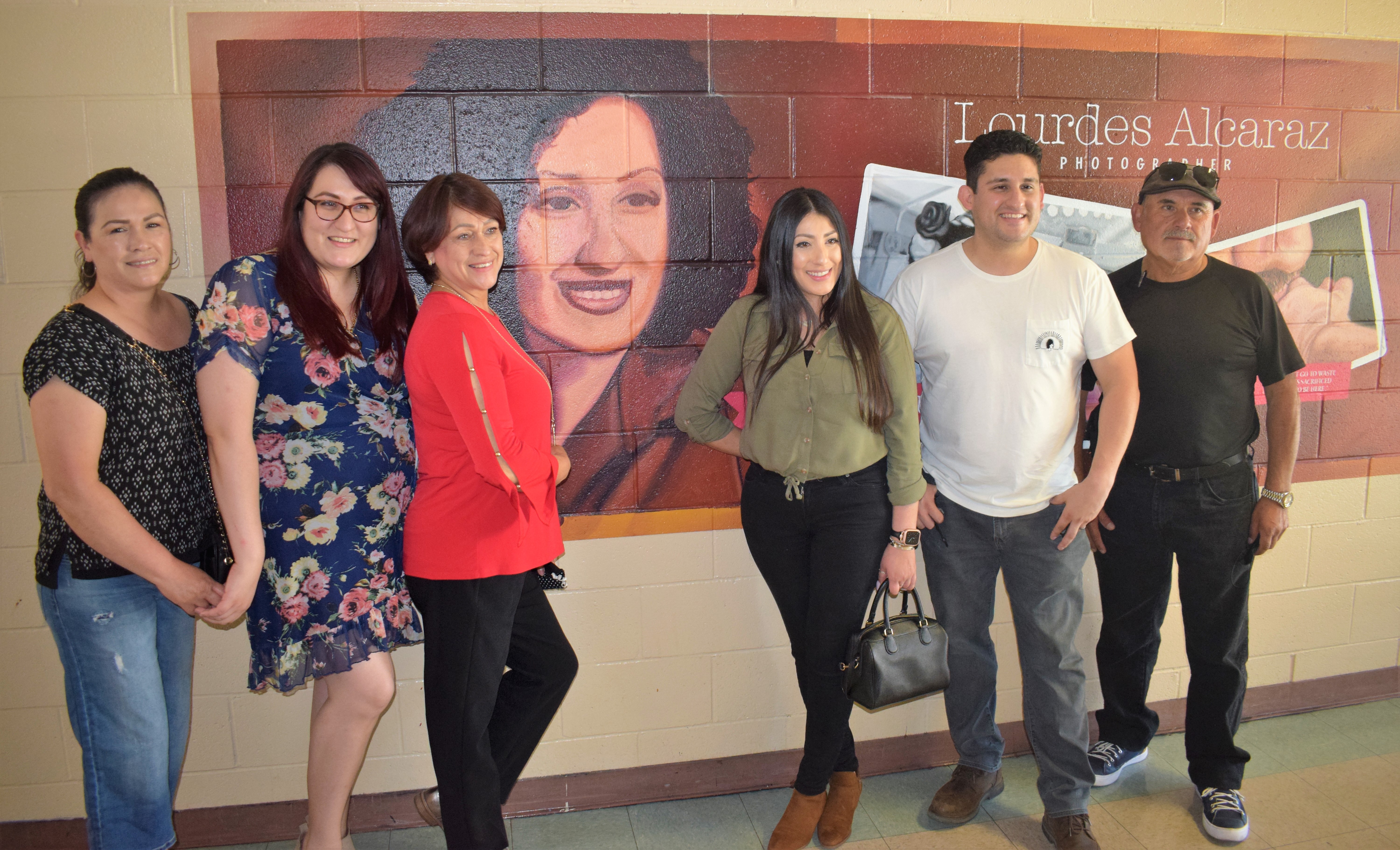