FONTANA, CA – Fontana High School English teacher Melissa Rojas understood that when school closures occurred in March many of her graduating seniors would not have the traditional experience for prom and commencement, the two biggest moments of their senior year.

Wanting to do something special for them, Rojas contacted a local confectioner who created two types of chocolate-dipped strawberries – one wearing a maroon dress and the other clad in a tuxedo – then spent a day with her family hand-delivering the treats to her students’ homes. For graduation, Rojas returned with gift bags inscribed with inspirational messages and containing personalized water bottles.

For bringing joy to the hearts of her students, Rojas was recognized as a 2020 Staples Thank a Teacher recipient, one of just 20 teachers nationwide to receive the award. Rojas accepted her award via a Zoom conference on Nov. 20, which included a $5,000 cash stipend to spend on school supplies.

“I am so blessed to be a part of the Fontana High family because we take care of each other,” Rojas said. “Senior year is a crucial time for students. They are dealing with so many social-emotional issues and need support. It broke my heart that my seniors couldn’t attend prom. I wanted to do what I could to let them know they are amazing kids who deserve to have great memories of their senior year.”

Delivering the chocolates proved to be quite an adventure for Rojas, her husband and their two young children. The 35 seniors resided not only in Fontana but in several adjoining cities, turning the task into an all-day journey. Additionally, it was one of the hottest days of the year and Rojas feared that the chocolates would melt before they arrived at their destination.

“Some of the students weren’t home and we couldn’t just leave the chocolates on the doorstep, so we made arrangements to come back another day,” Rojas said. “It was well worth it. In my classroom, my students and myself bring such a whirlwind of energy. That’s how we work. We missed that during the closures, that personal connection. It’s so important for the students. They need encouragement.”

Rojas was inspired by her former high school English teacher, Francie Ward, to pursue a career in education, eventually returning to her alma mater to complete her student teaching training under the guidance of her mentor. When Rojas came to Fontana High in 2008, she brought her compassion and an ability to connect with students that has brought much admiration from her colleagues.

“I am so proud of Melissa Rojas. She truly deserves this recognition from Staples and we are all so happy for her,” Fontana High Principal Ofelia Hinojosa said. “She has a unique ability to form lasting bonds with her students, to listen to them, offer her support and motivate them to achieve at the highest levels.”

The Staples Thank a Teacher program was created through a partnership between the office supply store and “The Office” actress Angela Kinsey, who is a vocal advocate for educators. Kinsey, whose sister is an educator, joined the winning teachers on the Zoom call. Like Rojas, Kinsey was inspired by her high school English teacher.

“Melissa Rojas is emblematic of the dedicated service and personal connections Fontana teachers bring to their classrooms,” Fontana Superintendent Randal S. Bassett said. “Thank you to Staples for recognizing Melissa, who intuitively goes above and beyond to make her students feel special.”

FUSD_ROJAS: Fontana High School English language arts teacher Melissa Rojas was recognized in the 2020 Staples Thank a Teacher contest, one of just 20 teachers nationwide to be celebrated for making a positive impact in the lives of others. 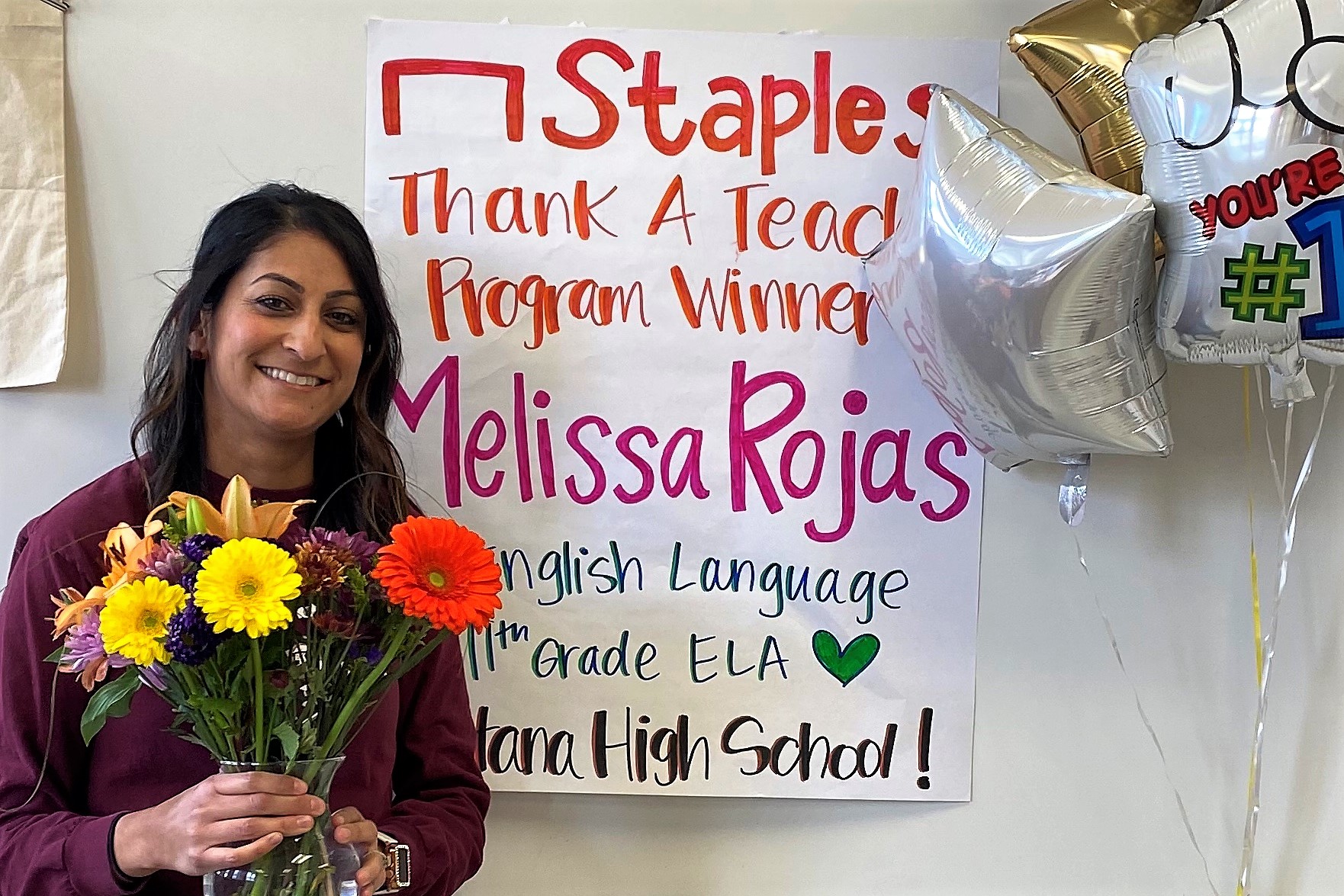