FONTANA, CA – Fontana High School Class of 2015 graduate Carlos Galván remembers the day his Advanced Placement Chemistry teacher, Nina Rodriguez, told him he should consider attending a university and majoring in chemistry. For Galván, this was the first time his work was singled out for praise, motivating him to push himself to achieve at a high academic level.

Today, Galván is a doctoral candidate in the UCLA Molecular Biology Interdepartmental Doctoral Program (MBIDP) and a UCLA Broad Stem Cell Research Center trainee, conducting research on skin cancer. As a first-generation college student, Galván is following a tradition of hard work and dedication rooted in his family, which has resided in Fontana for generations.

“I am very proud of what I have been able to accomplish and am grateful for the opportunities and support I have received thus far,” Galván said. “I would not be where I am today without the love of my family and the encouragement of my teachers, who recognized my potential and helped me navigate the process of applying for college.”

No one is prouder of Galvan’s accomplishments than Galván’s father, Carlos Galván Sr., a FOHI Class of 1989 graduate who has worked as an HVAC technician for the Fontana Unified Maintenance & Operations Department for 17 years.

“Carlos is an awesome kid and we are super proud of him,” Galván Sr. said. “It’s been an amazing journey for us. We all had to learn together about college and understand that he needed to do this because it was an opportunity we never had. We kept our faith through hard times, made it through as a family, and are so excited to see him doing the things he loves.”

Galván was a freshman when he joined FOHI’s Advancement Via Individual Determination (AVID) program, which was his first exposure to college life. He learned to write essays and personal statements and joined AVID classmates on field trips to visit universities like USC and UC Berkeley. Eventually enrolling at UCLA, Galván earned a bachelor’s degree in biochemistry, graduating in 2019.

“My goals are to use research to advance the knowledge of cancer initiation and treatments, as well as give back to my community to make higher education more accessible to underserved students,” Galván said.

Although Galván faced obstacles while obtaining his degree, such as the passing of his grandfather, who worked at Kaiser Steel for 30 years, and Galván Sr. being diagnosed with colon cancer, it did not deter him from his goals.

“For Carlos it was hard,” Galván Sr. said. “Imagine you’re in college, you have all this pressure, living far away from home, and then dealing with the uncertainties this disease comes with. Fortunately enough, God blessed me and I survived this. With my son studying how to cure cancer, it had a big impact on all of us, but this was more of an inspiration for him to do better.”

As a doctoral student, Galván researches a type of skin cancer called squamous cell carcinoma, tracking its progress in the body as it grows and metastasizes.

“While studying biochemistry at UCLA, I was in a program that encouraged me to join a research lab, which was something that was completely unfamiliar to me,” Galván said. “I’ve always had the curiosity to figure out why things happen and had a high disease prevalence in my family and friends growing up, so having conducted research since 2016 has allowed me to tackle down these two areas.”

Galván also treasures the outreach he does as co-president of UCLA’s Society for Advancement of Chicanos/Hispanics and Native Americans in Science (SACNAS), which helps to guide low-income and underrepresented students into STEM fields. SACNAS focuses heavily on outreach and invites K-12 students to campus for daylong science activities, like explaining the science of silly putty to elementary school students or making lava lamps with middle school students.

For the Galván family, Carlos was the first to attend college but not the last. His sister, Simiar, a FOHI Class of 2020 graduate, is a second-year student at UC Riverside. His youngest sister, Isabella, attends Beech Avenue Elementary School.

FUSD_FOHIALUM: Class of 2015 Fontana High School graduate Carlos Galván celebrates with his mother Norma, sisters Isabella and Simiar, and father Carlos Galván Sr. after graduating with a bachelor’s degree in biochemistry from UCLA in 2019. Galván is currently a doctoral student and trainee at the UCLA Broad Stem Cell Research Center. 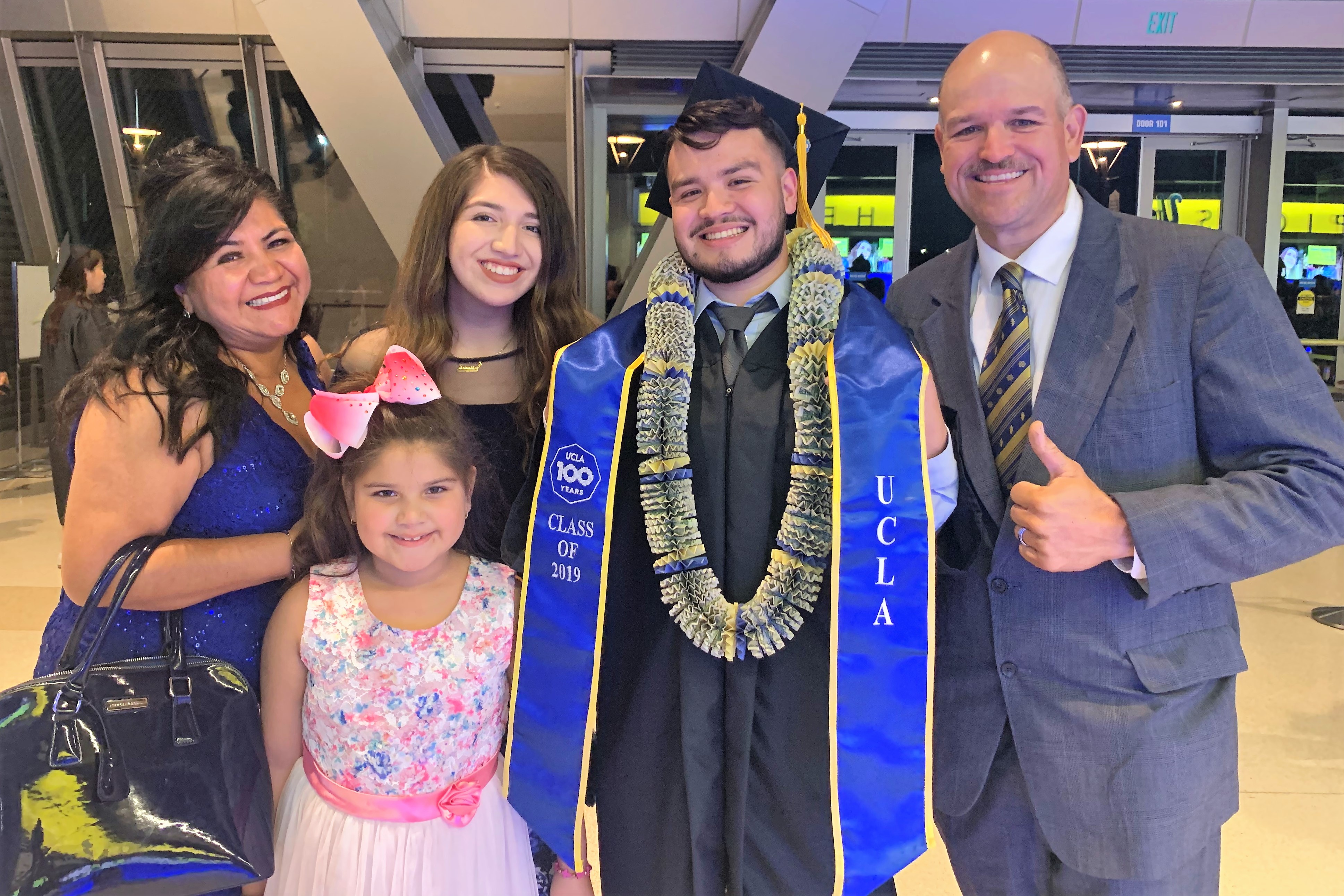