EL MONTE – Mountain View High School senior Steven Gov blasted out of the starting gate, steering his team’s solar boat through the current and sprinting 200 meters toward the finish line of a competition designed to introduce students to the ecological benefits of solar power and resource management.

“It was pretty scary operating the boat the first time, but after two minutes I fell in love with it,” said Gov, one of 13 Mountain View students to participate in the event. “The best part of the Solar Cup is the teamwork, especially when you get to the competition. It’s great to be around so many people who want to learn engineering. We all help each other.”

The three-day competition is the culmination of a seven-month MWD-sponsored education program in which high school students design, build and race 16-foot single-passenger solar-powered boats, document their progress in two technical reports and create a public service message.

“The students work hard through long periods of trial and error, but the reward is being out on the water with your peers, having fun,” said Porter, who worked in the aerospace and healthcare industries for 20 years before she began teaching at Mountain View in 2006.

The Solar Cup featured two racing events – the endurance and sprint. For the endurance race, boats are equipped with solar panels and two solar-charged batteries, as they circumnavigate a 2-kilometer course for 90 minutes.

The 200-meter sprint boats are powered by one solar-charged battery, without the panels. During this race, the Solar Creations Club placed first place among its 11 Foothill Division rivals.

The collective team spirit brings to life more than a solar-powered, seaworthy boat. Students must raise funds to buy equipment, keep precise notations on their progress and pass a series of rigorous inspections by MWD engineers. At the competition, the team is composed of electrical, mechanical, launch and document specialists, spotters, time keepers, tool and equipment managers, and skippers.

“The Solar Cup has allowed me to use many of my skills and learn new ones,” Mountain View senior and Solar Creations President Jesica Lopez said. “I have been able to put my leadership and creative skills to use. I also learned how to use a variety of tools. This has given me a lot of hands-on experience.”

The Solar Creations club received its first Solar Cup grant from MWD in 2010, allowing students to employ critical thinking and collaborative learning skills outside the classroom. This year marks the team’s seventh appearance at the Solar Cup.

“Our students understand the importance of conserving our natural resources through conservation and green energy and are prepared to act as future gatekeepers of the environment,” Mountain View High Principal Jose Marquez said. “I want to congratulate our talented Solar Creations team, led by our innovative teacher Lee Porter, for their inspiring performance at the Solar Cup.”

061118_EMUHSD_SOLAR1: Members of the Mountain View High School Solar Creations Club display their solar-powered boat that competed in the Metropolitan Water District’s 2018 Solar Cup competition, held May 18-20 at Lake Skinner in Temecula Valley. The Solar Cup is the culmination of a seven-month education program in which high school students design, build and race solar-powered boats and learn the benefits of solar power and water management.

061118_EMUHSD_SOLAR2: Mountain View High School senior Steven Gov skippers a solar-powered boat during the 2018 Solar Cup, held May 18-20 at Lake Skinner in Temecula Valley. The three-day competition, sponsored by the Metropolitan Water District, is the largest student-based solar-powered boat race in the nation. This is the seventh year the MVHS Solar Creations Club has participated in the Solar Cup. 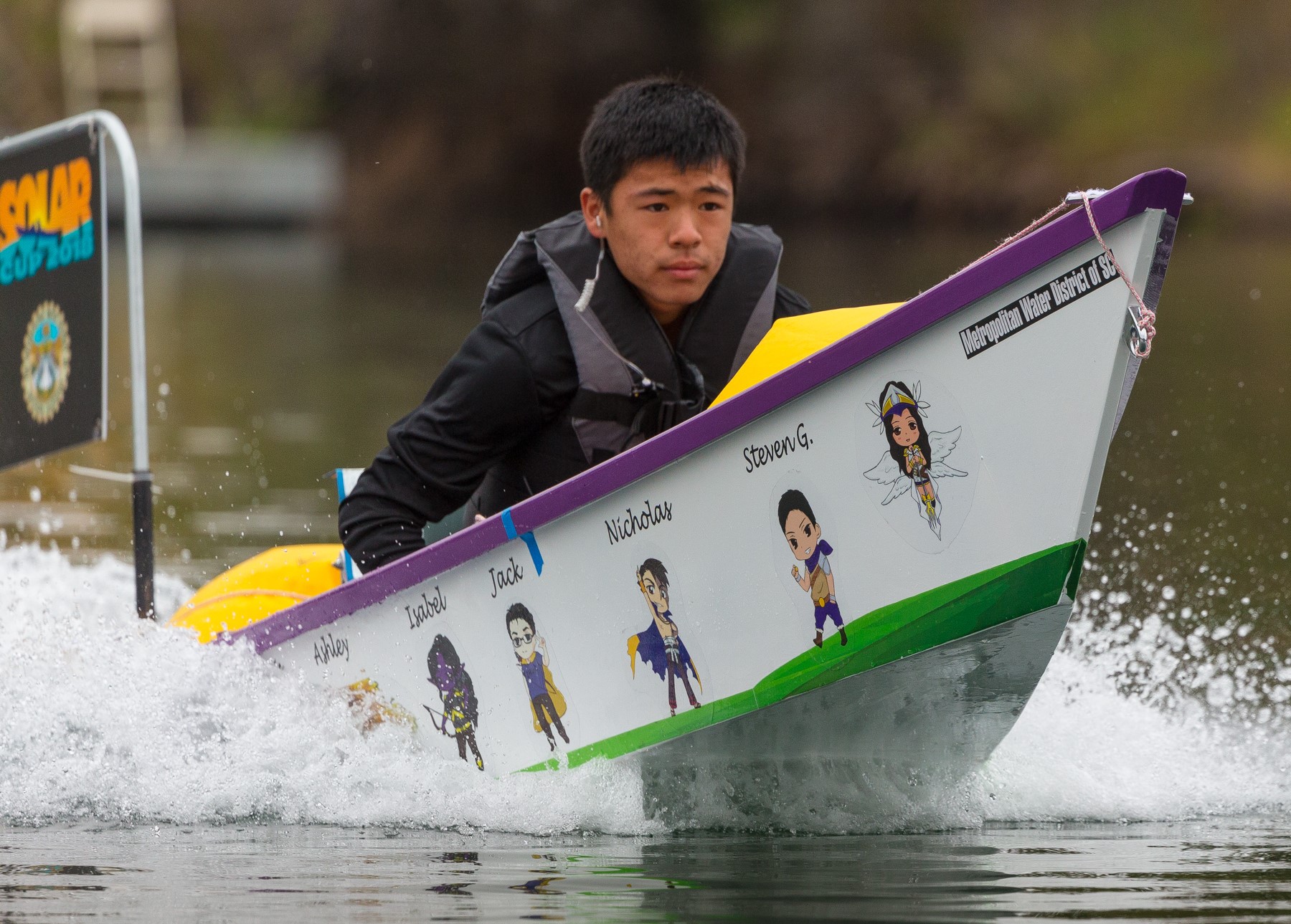 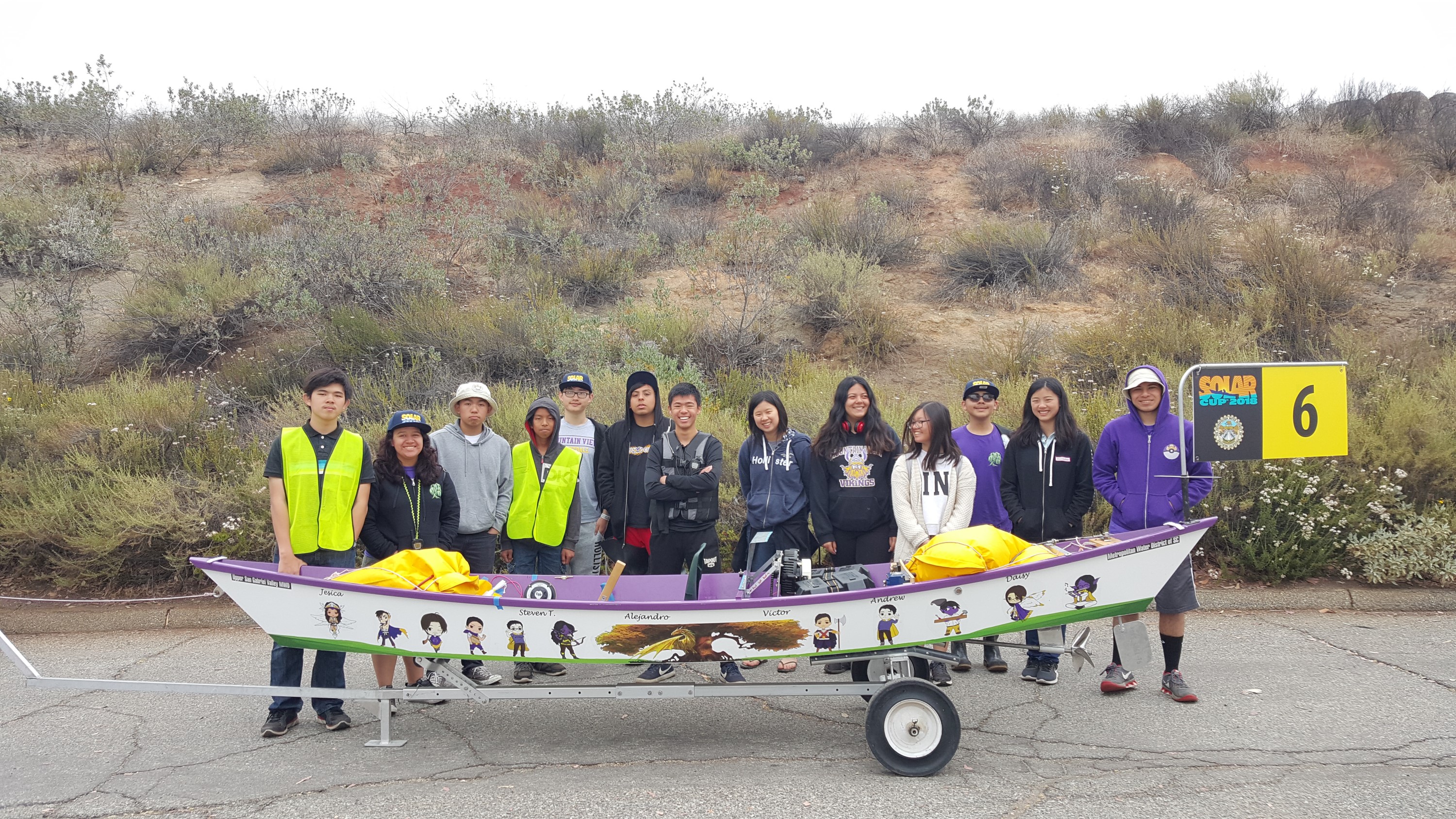