EL MONTE – Students from Mountain View High School enjoyed a lunchtime concert on Aug. 20, when The Red Pears – an indie rock band formed by two alumni in 2013 – made their triumphant return to the school.

Mountain View Class of 2012 graduate Henry Vargas and Class of 2013 graduate Jose Corona met while competing in a school-sponsored Battle of the Bands in 2012. Though Corona’s band emerged the winner that night, the two eventually joined forces as the Red Pears, beginning a musical journey that has led them to sold-out shows at the Glass House in Pomona and a performance at Coachella in 2019.

“We were just starting out. Mountain View gave musicians and bands a platform and supported us,” Corona said. “It was a big thing. The Battle of the Bands were always packed with students, parents, and teachers. I don’t think you could get that experience anywhere else. We have always been thankful for the opportunities we received here, and we want to give back by doing a video and concert.”

Vargas was so drawn to the music scene at Mountain View High School that he transferred there as a senior, just to be able to participate in the Battle of the Bands.

“The teachers were always supportive of the music. That was an inspiration and why I transferred here,” Vargas said. “We wanted to come back and show a new generation of students that you can follow your dreams and find success. You can accomplish anything if you are willing to put the hard work in.”

Looking for a venue to film a music video for their new song “House of Mirrors,” Vargas and Corona reached out to Mountain View High drama teacher Scott Bier about using the performing arts center. Bier, who organized the Battle of the Bands at Mountain View until 2016, made the arrangements, which included enlisting students enrolled in the school’s VISTA Academy to work as crew.

“The Battle of the Bands was an important part of the Mountain View culture. I felt it was important to give the kids an outlet,” Bier said. “I was very excited to have Henry and Jose come back and give our VISTA students a chance to gain valuable experience working with professionals on a video shoot. It means a lot for our students to have successful people from their neighborhood talk to them and work with them.”

Mountain View junior Daylinn Silva is in her second year as a VISTA Academy student. One of more than a dozen VISTA students to participate in the video shoot, Silva was appreciative of the opportunity.

“I’m in VISTA to learn how to record and edit video,” Silva said. “For the video shoot I did a little bit of everything. I put up curtains and backgrounds, adjusted the lighting, put tape down, really anything the director asked me to do. It was fun, plus I love the Red Pears’ music. I’m one of their biggest fans!”

After the Red Pears’ lunchtime concert, Vargas and Corona handed out T-shirts, buttons and stickers, and signed autographs for Mountain View High students.

Vargas, the Red Pears lead singer and guitarist, and Corona, the drummer, are complemented by Patrick Juarez on bass. Their music is available online through Bandcamp and Soundcloud. The Red Pears have several upcoming L.A-area performances, including two shows at the Wiltern Theater in November.

“It is very inspiring when El Monte Union students return to school to share their experiences with the students,” Superintendent Dr. Edward Zuniga said. “Mountain View High has long had a strong music and media culture, supported by instructors like Scott Biers and the VISTA Academy team. Congratulations to Henry and Jose for never wavering on their dream. We can’t wait to see where they go from here.” 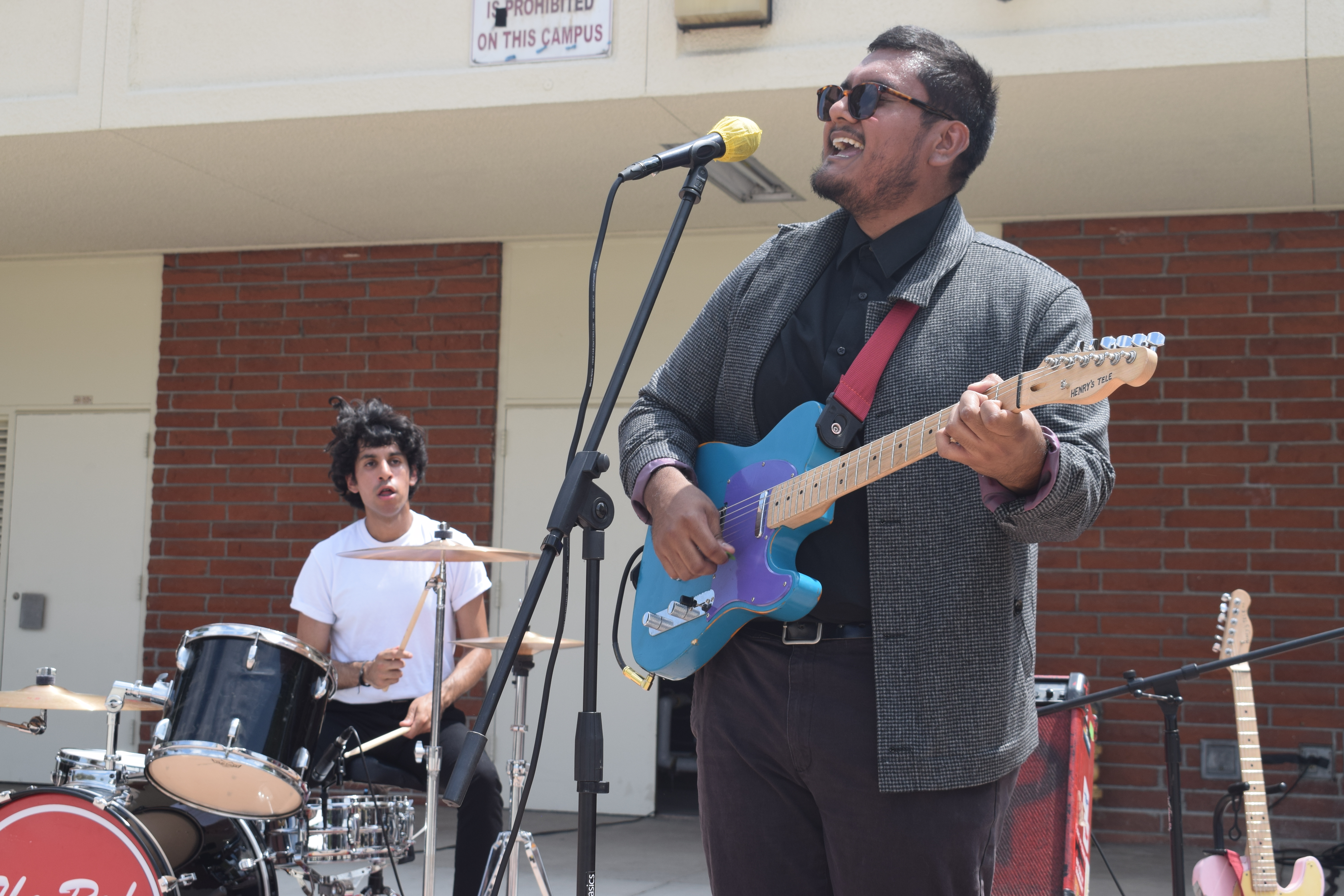 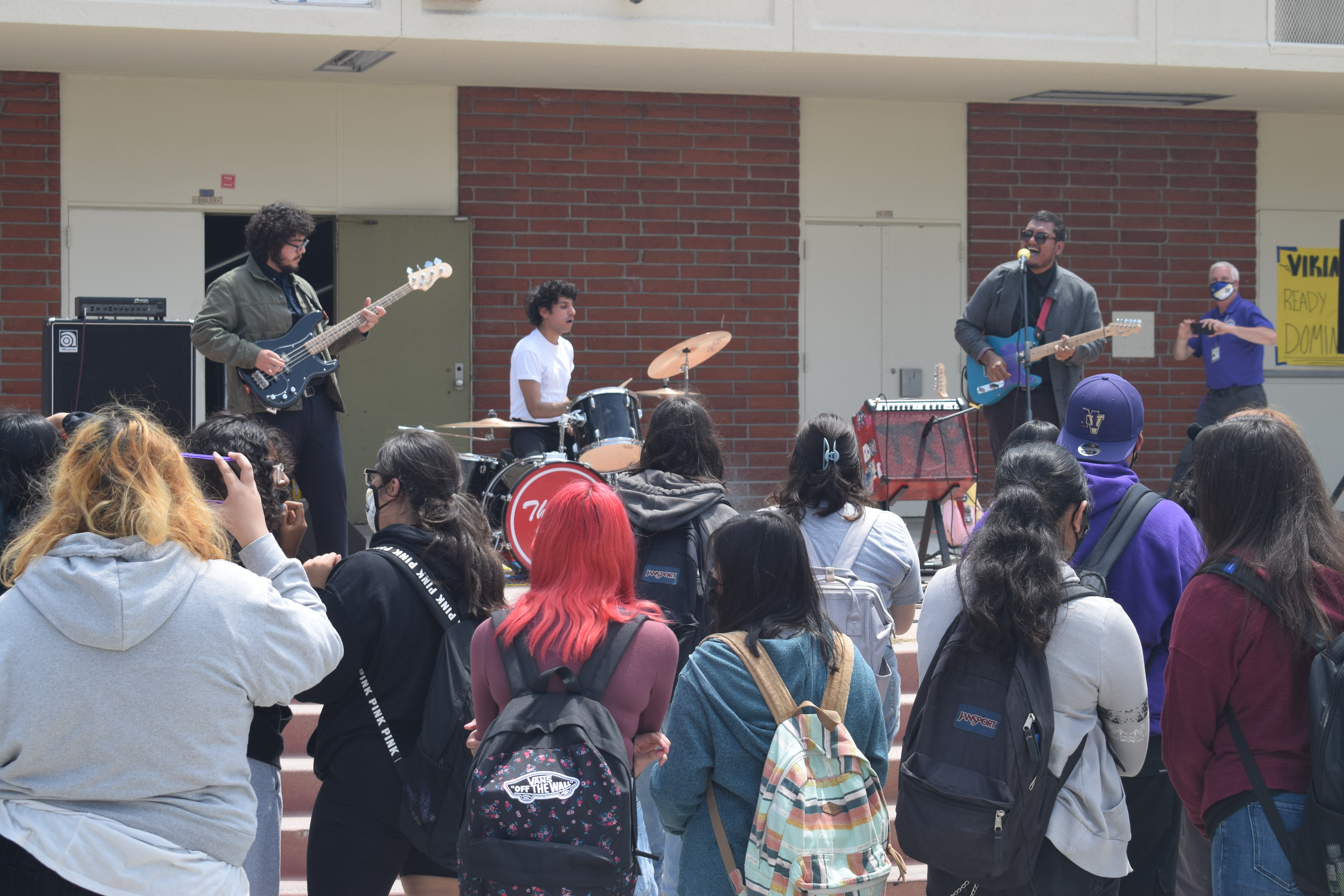