SAN DIMAS/LA VERNE – Bonita Unified School District celebrated the retirement of Board of Education President Chuck Coyne on Dec. 8, bringing together Bonita Unified families, community members and District leaders for an evening of humorous anecdotes and heartfelt speeches that summarized his 17 years of service on the Board.

Coyne, who was first elected in 2005, is one of the longest-serving Board of Education members in Bonita Unified history. During his time on the Board, Coyne helped pass two bond measures that funded the construction of the Bonita Center for the Arts, expansion and modernization of four school gymnasiums, upgrades to two athletic stadiums, the installation of solar panels across the District and more.

“Bonita is a special place to be and we have greatly benefitted from having Chuck on the Board for all of these years, and he will be greatly missed,” Bonita Unified Interim Superintendent Matt Wien said. “He has created a legacy of service that I am certain will inspire our District community as we move forward and strive for new levels of success.”

While Coyne described himself as “someone who daydreamed in class,” education has played a significant role in his life; his grandmother, mother and wife were all school teachers. Coyne has been a resident of San Dimas since 1992, and his daughter attended and graduated from Bonita Unified schools.

His volunteer experience spans nearly 20 years and includes longtime support for Bonita Unified students through the La Verne/San Dimas Educational Foundation; advocacy for foster youth as part of the McKinley Children’s Center board of directors; coaching for youth sports; and service in the classroom, on school site council, and through the Parent Teacher Association.

The event also featured speeches full of thanks, fond memories, and presentations of certificates and token gifts from the mayors of San Dimas and La Verne, the cities’ respective Chambers of Commerce, the La Verne/San Dimas Educational Foundation, the Bonita Unified Teacher’s Association, the California School Employees Association and the Bonita Unified Management Team.

Wien also presented Coyne with the District’s highest honor – the Bonita Purpose Award – in recognition of his longtime support of the District’s mission to help Bonita Unified students live their purpose.

Coyne, who has spent his career as a writer, photographer and editor of niche interest magazines, channeled his experience as a “trained observer” in a humorous speech, which reflected on the state of education in general, the growth of the District over the last 17 years, the contributions of Bonita Unified’s teachers, staff and administrators, and the collaboration with his fellow Board members that helped the District overcome challenges and develop a reputation as one of the top-performing unified school districts in the state.

“Thank you to everyone who came to this celebration and shared their kind words, and thank you to our teachers, staff, administrators, volunteers and community for all they have done for Bonita Unified over the years,” Coyne said. “It has been an honor and a privilege to represent this District all these years, and I am thankful for all of the support and proud of all that we have accomplished together over the last 17 years.”

BUSD_COYNE2: Bonita Unified Board of Education President Chuck Coyne celebrates his retirement from the Board with his family during a Dec. 8 ceremony. From left to right: Chuck’s daughter Jenna, his sister Pat, his wife Janette, Coyne, his brother James and his sister-in-law Carol. 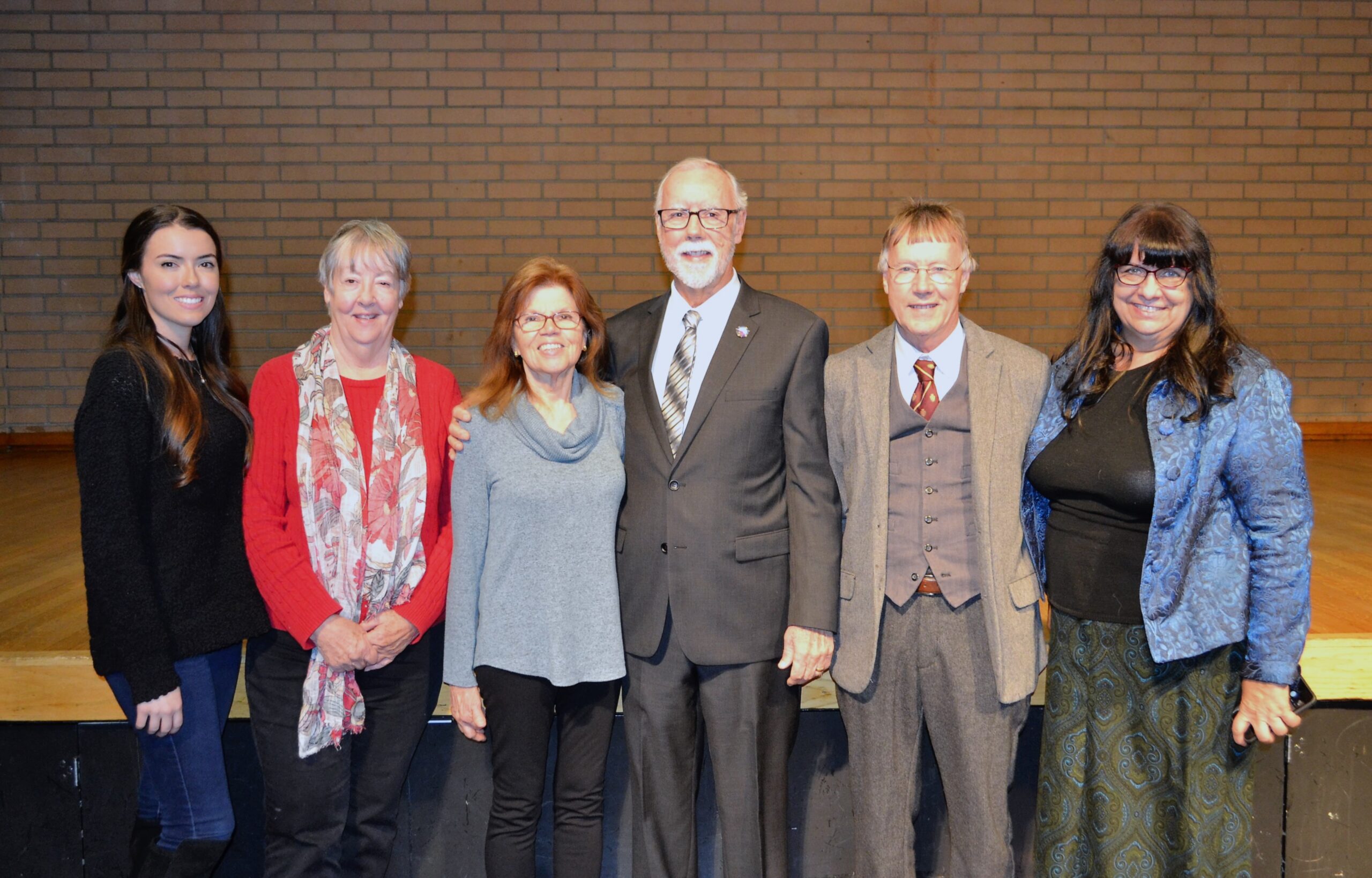 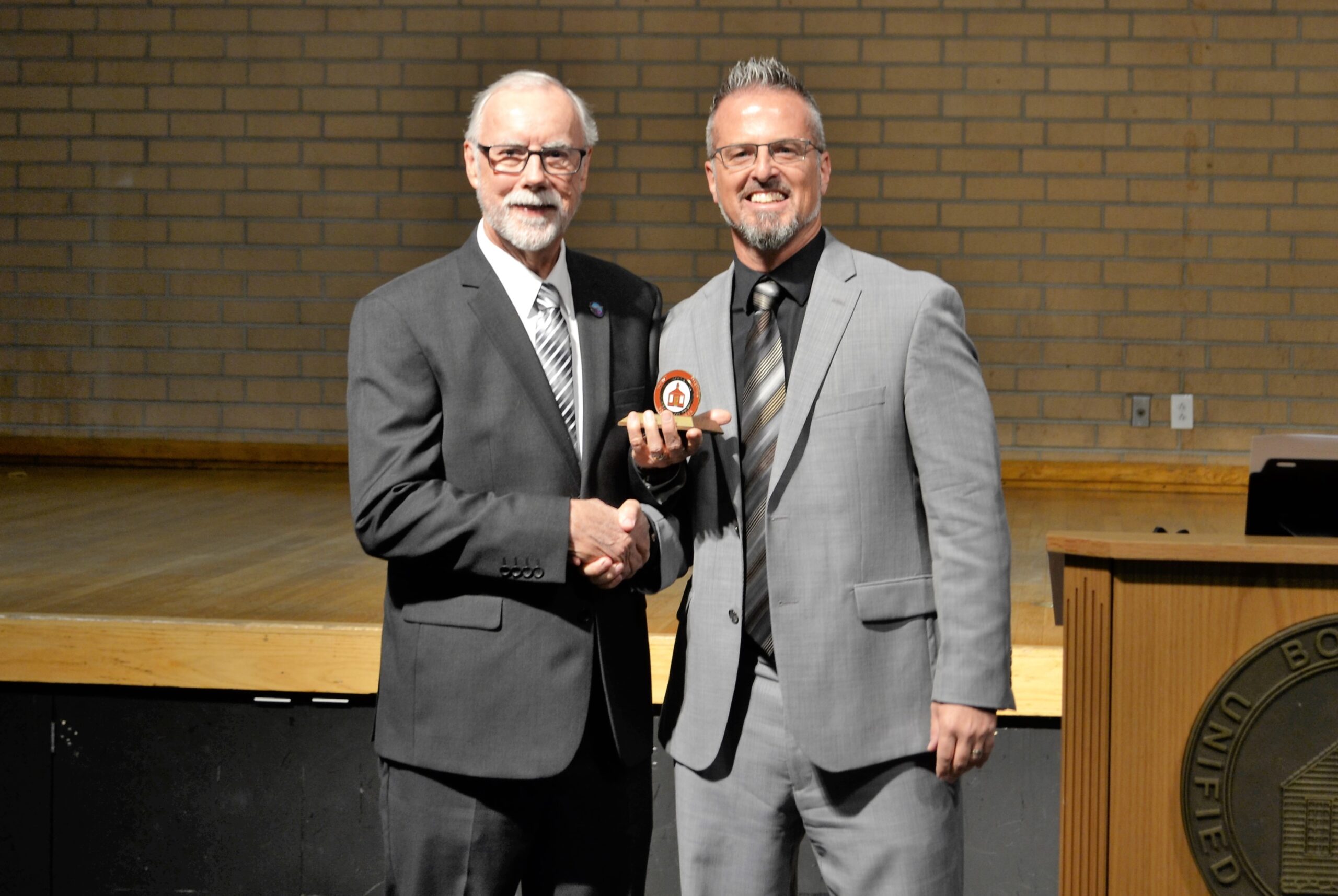