The Holland Bulldogs demolished 28 competitors at the second annual Rancho Del Rey tournament on Feb. 3 to snag fourth place overall and earn the right to compete in the state championship.

The team secured the Excellence Award, the highest honor given by VEX Robotics, as well as winning the Amaze Award for best robot design, and receiving a $75 voucher for iDesign products.

“This means so much to us, and it’s great that in our first year we have done so well,” Holland eighth-grader Cristian Duran said. “We are going to keep putting in hard work to make sure our bot is in top shape for the state championship.”
At first, team members were unsure whether their robot would work properly.

“The first time we turned on autonomous mode, the gears skipped so we had to rework them, but we ended up winning and it was a great experience to share with my team,” said Duran, the Bulldogs’ mechanic.

Before the matches, the competitors presented their robots and notebooks on design, construction and progress to a panel of judges. The Bulldogs shined during the panel interview and later went on to win six of the eight matches on the competition field.

The Excellence Award is presented to the team that exemplifies overall excellence. For the Amaze Award, a team must demonstrate its robot’s overall quality, including programming, autonomous mode, performance and consistency.

“This is an incredible group of students – they are dedicated, responsible, and they put in the long hours to go above and beyond,” Holland Principal Mike Rust said. “This is our first year and it is impressive that we were able to put together all the components of a team in a short time. Their success is something to be extremely proud of.”

The Bulldogs are working every day after school to improve the autonomous mode and modify gears to ensure smoother movements for the upcoming championship. They are also programming the robot to estimate distance and structures in a competition field since they do not have a practice ring, which puts them at a disadvantage with teams that do.

Nine of the 40 teams performing in the State Championship will be selected to go on and compete at the VEX Robotics World Championship, to be held from Wednesday, April 25 to Saturday, April 28 at the Kentucky Exposition Center in Louisville, Kentucky.

“These competitions are incredible because they motivate students to perform at higher levels and apply their communication, teamwork, written and verbal skills in an exciting setting,” Superintendent Dr. Froilan N. Mendoza said. “We are so proud of the Holland Bulldogs for all of their hard work and dedication, and we cannot wait to cheer them on at the Middle School State Championship.”

BPUSD_HOLLAND_ROBOTICS_1: Holland Middle School’s robotics team has made Baldwin Park Unified history as the first team to qualify for the VEX Robotics Middle School State Championship, set for Sunday, Feb. 25 at Fairplex in Pomona. The Holland Bulldogs demolished 28 competitors at the second annual Rancho Del Rey tournament on Feb. 3 to snag fourth place overall and earn the right to compete in the state championship. 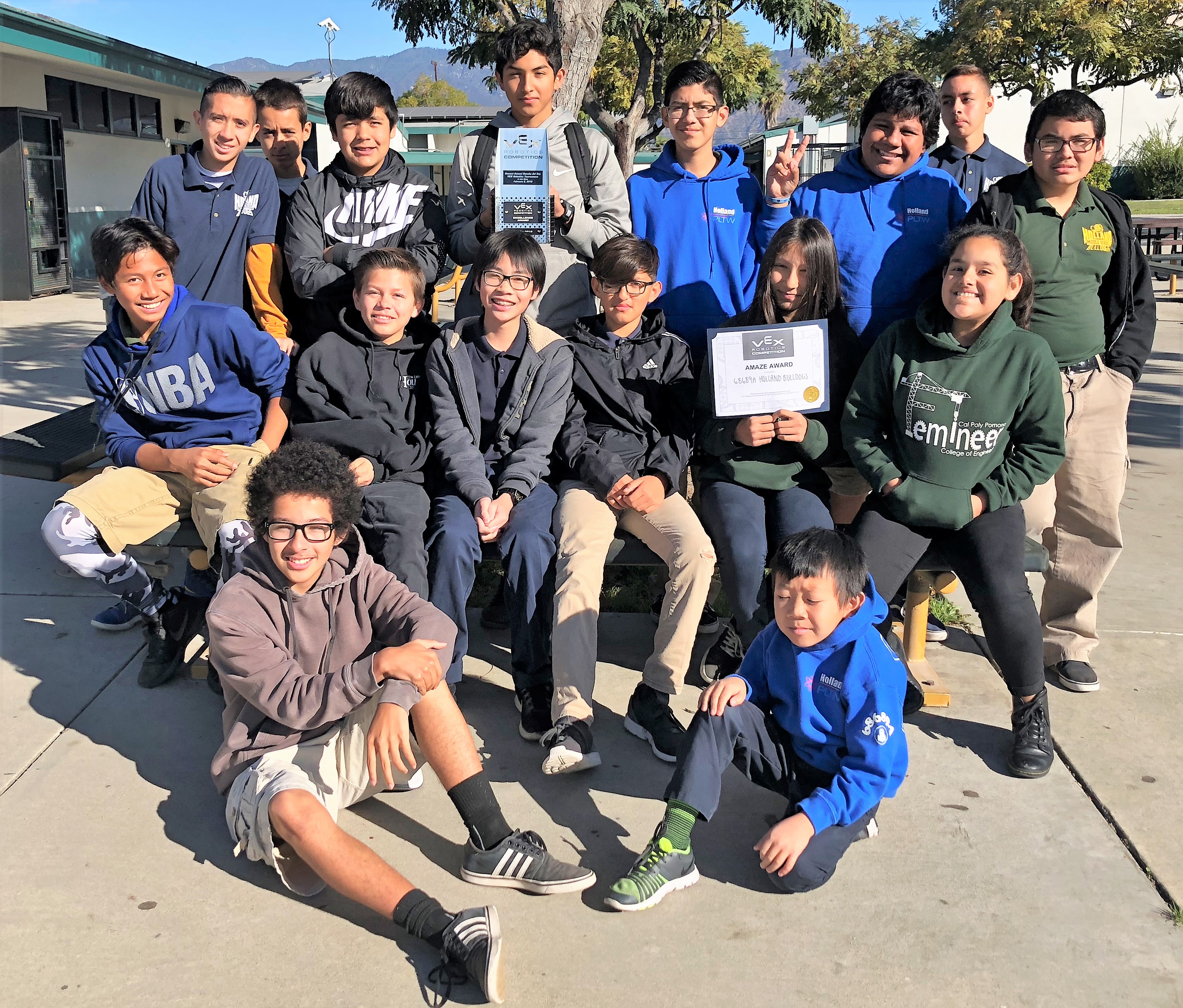