And they didn’t stop there. A roll of toilet paper launched a spaceship, a wrecking ball spun to knock over blocks and boats were pushed across tubs by a fan, a plastic-spoon propeller or even shoved by a stick.

In each case, the result was met with a singular sound: Cheering students.

Welcome to the 21st Century Challenge, a competition among Baldwin Park Unified elementary students to design 10-foot-by-10-foot devices that use levers, wheels, wedges, screws, inclined planes and pulleys to launch a message.

“It’s amazing to see what our students came up with,” said Sue McNamara, who developed the contest for Baldwin Park Unified. “Some of these machines almost defy belief, using toothpicks to create bridges or plastic spoons to make a propeller. The creativity is off the charts.”

Teams of students at 11 Baldwin Park Unified elementary schools worked for nearly four months to create the Rube Goldberg devices – named for a cartoonist and engineer known for his whimsical drawings of overly complex machines – using mostly common objects found in their classrooms or around their homes. Points were awarded for creativity, design, artistry as well as humor – which frequently popped up in the messages launched.

Five schools received special honors for their efforts at a celebration for the contest on April 26: Elwin Elementary was crowned first place for the second year; Tracy Elementary placed second and Santa Fe School came in third. Honorable mentions were given to Foster and DeAnza elementary schools.

Fifth-grader Sierra Villagran, a member of Elwin’s team, said the effort taught her more than just engineering and design.

“I realized you can work hard and have fun,” she said. “This proves that through teamwork you can accomplish anything.”

The celebration, held at the Performing Arts Center of Baldwin Park, included a presentation of videos in which students described their devices and demonstrated them in operation. Even more impressive than the inventive machines, McNamara said, is how the teams grew in their collaborations, with students spurring each other to achieve new accomplishments and discover new strengths.

“In the end, it all came back to the collaborative spirit and the friendships these students forged over the last few months,” she said. “That’s a lesson and a benefit beyond all the engineering.”
Teams at each school created their own approaches to the project.

At Elwin Elementary, students first developed machines independently – focusing on creating wonders of the ancient world. The collection of pyramids, a ziggurat and other items were then assembled into a journey across time in 22 steps. Their message: Don’t forget the coffee creamer.

Sierra said the Elwin team tested its design 70 times before getting all pieces to work.

“One part would work and then down the line something would not set off, and then we’d have to set it all up again. The next time we tried, that part would work, but the next step wouldn’t,” she said. “It was really frustrating.”

Then, finally, everything worked.

“It was a very happy moment and relieving,” she said.

BPUSD_CHALLENGE_2: Students at Baldwin Park Unified’s Elwin Elementary stand outside their 22-step Rube Goldberg device, which bears a warning in hieroglyphics, as part of the second annual 21st Century Challenge. 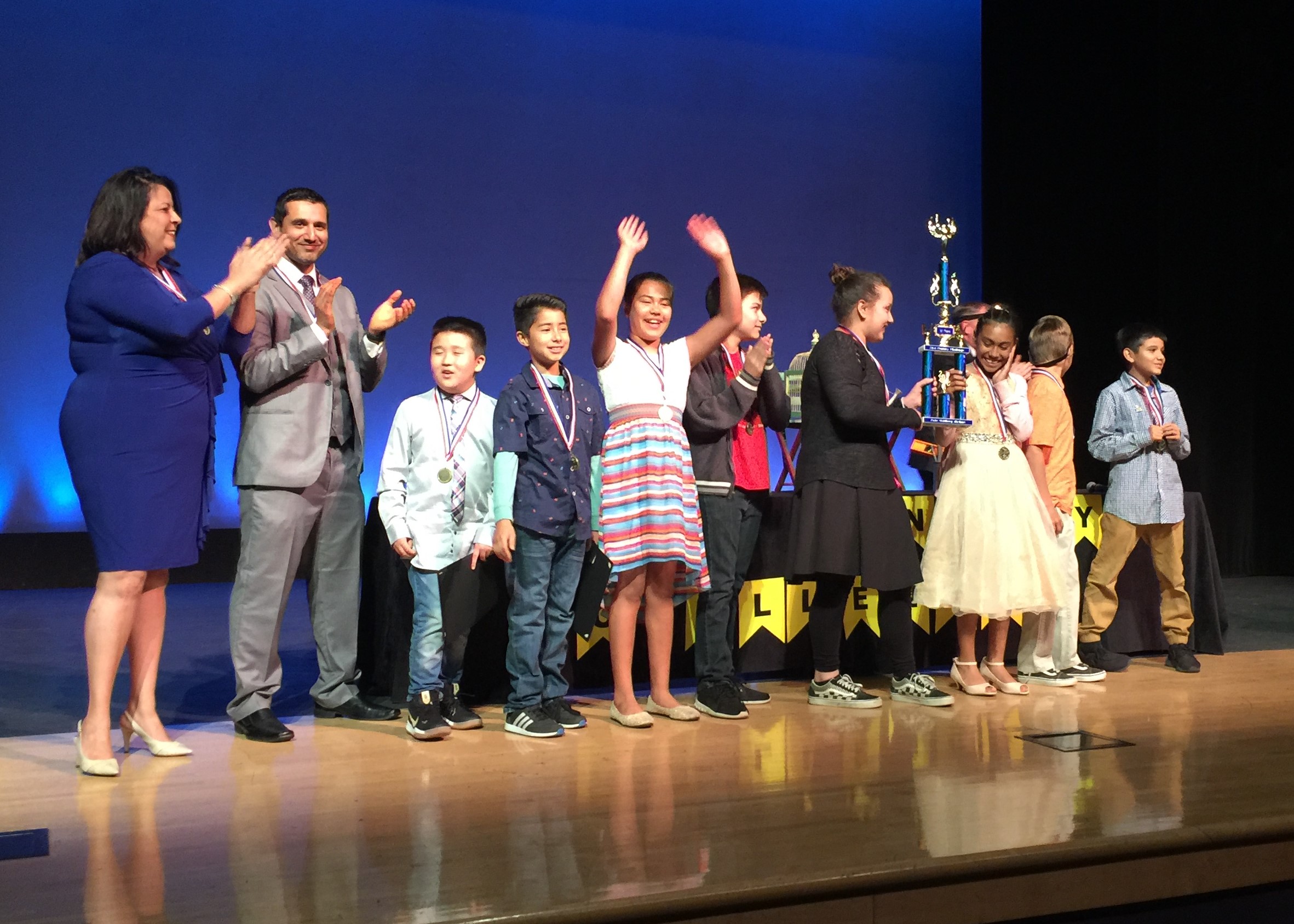 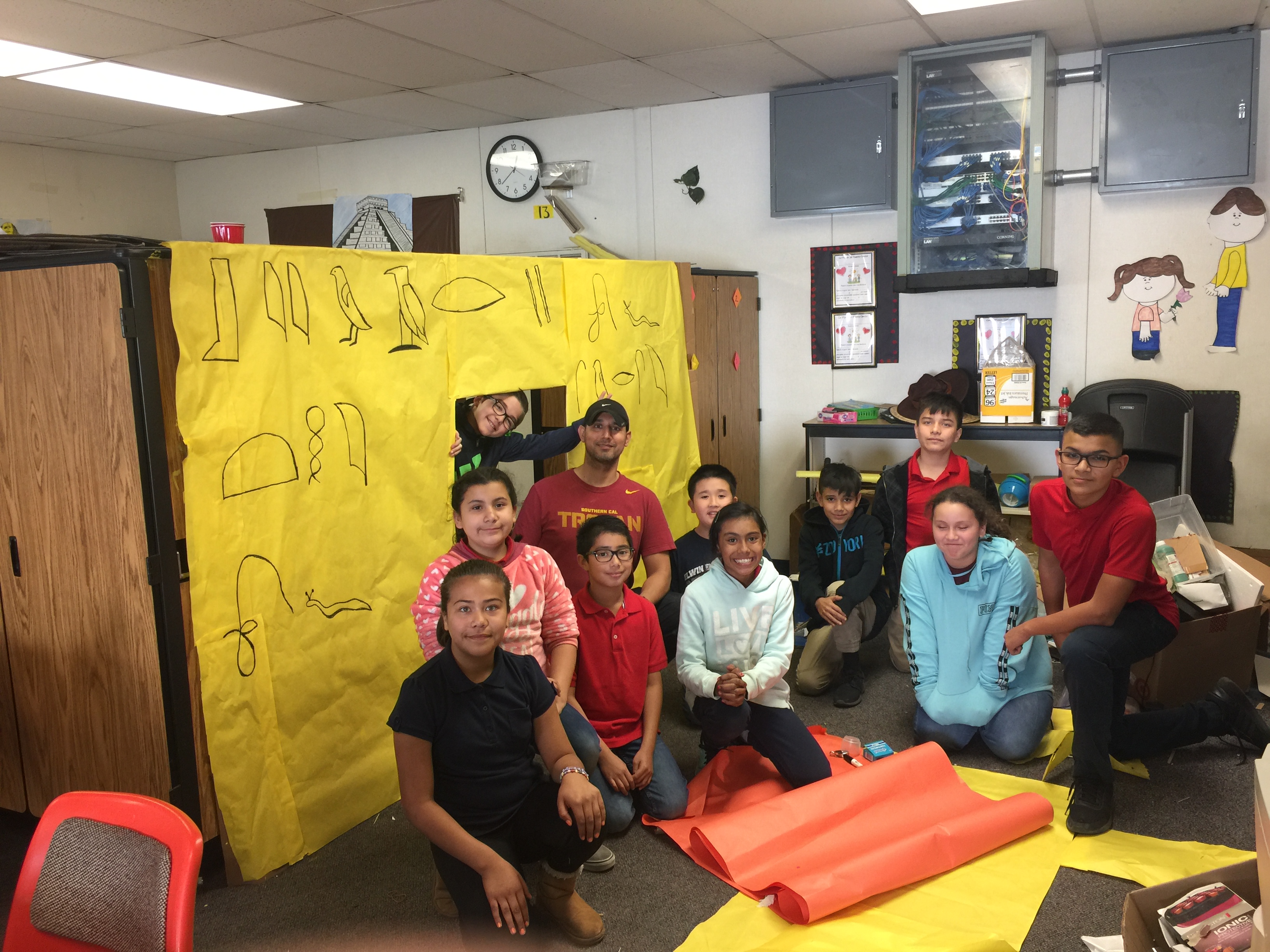